Turkey's ties with Africa based on mutual respect: Senegal's Sall 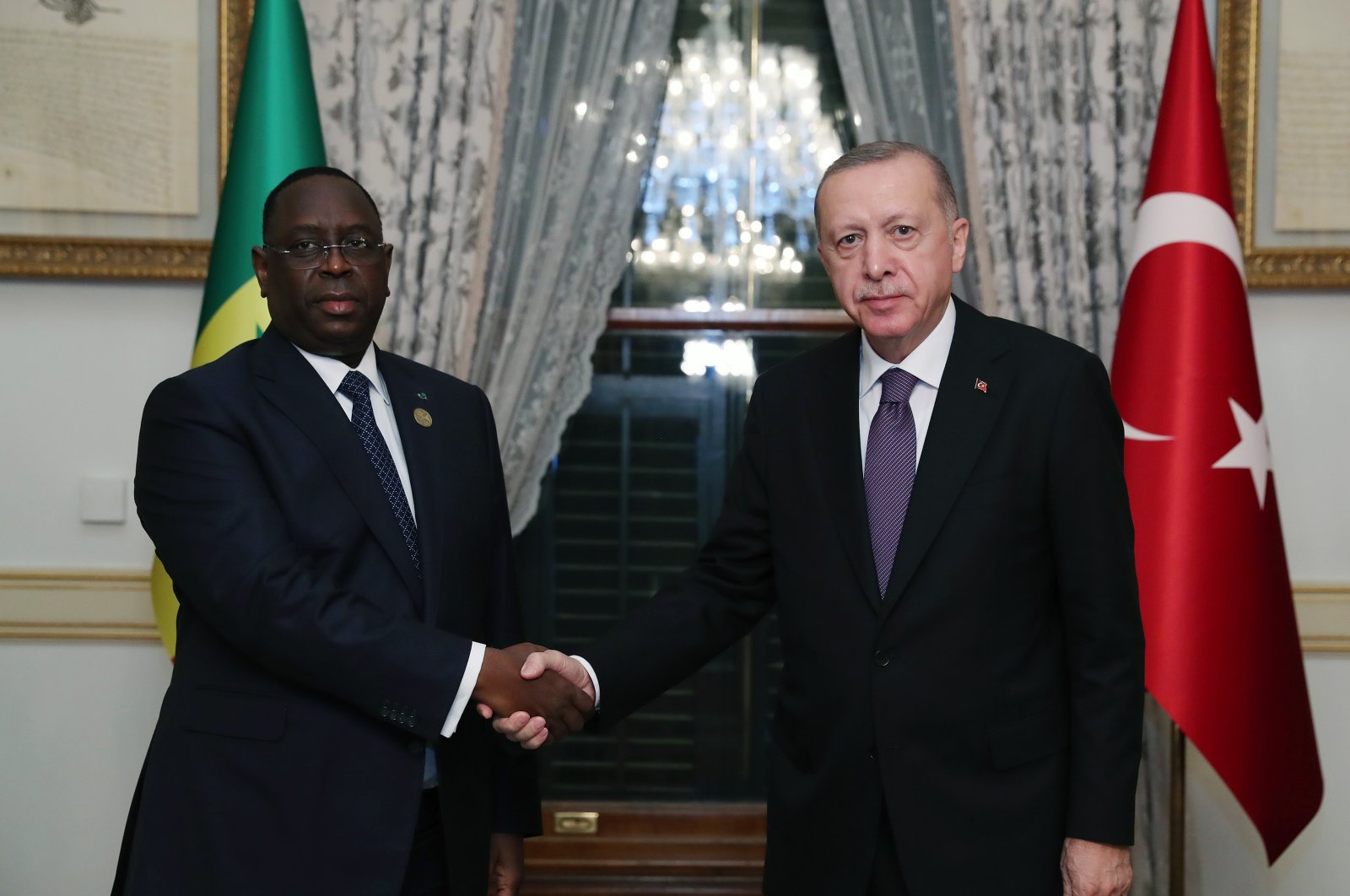 It is very important for the African countries that Turkey's relationship with them is based on mutual respect, Senegal's President Macky Sall said Monday.

Speaking to the Anadolu Agency (AA) during his visit to Istanbul to attend the third Turkey-Africa Partnership Summit, Sall emphasized that significant progress was made on the issues agreed upon at the second Turkey-Africa Summit held in 2014 in Malabo, the capital of Equatorial Guinea.

"The summit went very well for all participating countries. All African leaders were highly satisfied. Today, there is a very effective partnership between Turkey and Africa, based on equal foundations and the win-win principle, but most importantly, Turkey gives great importance to mutual respect in its relationship with Africa. This is a very important issue for African countries," he said.

Describing the cooperation between Senegal and Turkey as "quite sincere and fruitful," Sall noted that he also has a personal, friendly relationship with President Recep Tayyip Erdoğan.

"Thanks to these sincere bilateral relations, there are many big projects undertaken by Turkish companies in Dakar," Sall said. He underlined that Turkish companies play a crucial role in the Diamniadio new city project, which was established near Dakar.

Emphasizing that they started to see investments from the Turkish private sector in Senegal, apart from engineering, procurement and construction, Sall continued: "Africa cooperates with new partners such as China and Turkey, in addition to its traditional partners. We are talking about vast geography with ​​30 million square kilometers (11.5 million square miles) and 1.3 billion people. The big population needs good infrastructure, but you cannot meet this need with public aid. So there is a need for partners like Turkey for this. Turkey's relations with Africa are already very good. There is Turkish Airlines (THY), the flag carrier that flies to almost all African capitals, many Turkish companies with investments in the continent operate. Besides, of course, other partners are also on the continent. Africa is a competition central."

Asked how the transfer of the African Union (AU) presidency to Senegal in February 2022 will affect relations with Turkey, President Sall said: "We will continue to further strengthen our already good relations with President Erdoğan during my AU presidency term, in the interests of both Africa and Turkey. I will try."

The third Turkey-Africa Partnership Summit held in Istanbul adopted a joint declaration on Saturday. The declaration stated parties are committed to further strengthening and deepening the cooperation in the interest of the states and peoples. They also committed to cementing their collaboration on current issues in the global arena, including health, peace, security, governance and justice. The declaration said parties will focus on three main topics "peace, security and justice," "human-focused development" and "strong and sustainable growth."

Speaking at the closing ceremony, President Erdoğan said: "We want to develop together and increase the welfare of our people together; thus, we attach great importance to the memorandum of understanding."

It is a "great injustice" that the African continent, with its population of 1.3 billion, is not represented at the United Nations Security Council, the president noted.

Turkey will continue to deepen its ties with African nations under the leadership of President Erdoğan, Turkey's Communications Director Fahrettin Altun said Saturday.

The first Turkey-Africa Partnership Summit was held in 2008 in Istanbul, the second in 2014 in Malabo and the third was held last week in Istanbul. The summit is expected to launch a new stage in Turkey's relations with the African Union (AU) and African countries, according to Turkey's Foreign Ministry. The next Turkey-Africa Partnership Summit will be hosted in an African country.

Turkey's engagement with the African continent has been gaining pace over the years. Since taking office nearly two decades ago, first serving as prime minister, Erdoğan has been fostering ties with Africa, presenting Turkey as a fairer player than the continent's former colonial powers. Both sides have been vowing to tap into their greater potential when it comes to further expanding and deepening relations. To this effect, the number of Turkish embassies in Africa has increased from just 12 in 2002 to 43 in 2021. Turkey's trade with Africa totaled $5.4 billion (TL 94.5 billion) in 2003, which climbed to $25.3 billion by 2020 despite the coronavirus pandemic.

Turkey's opening up to Africa, which dates back to the action plan adopted in 1998, took shape in 2005, which Ankara declared the "Year of Africa." Turkey was accorded observer status by the Africa Union the same year. In a reciprocal move, the AU declared Turkey its strategic partner in 2008. Relations between Africa and Turkey gained momentum when the first Turkey-Africa Cooperation Summit was held with representatives from 50 African countries.