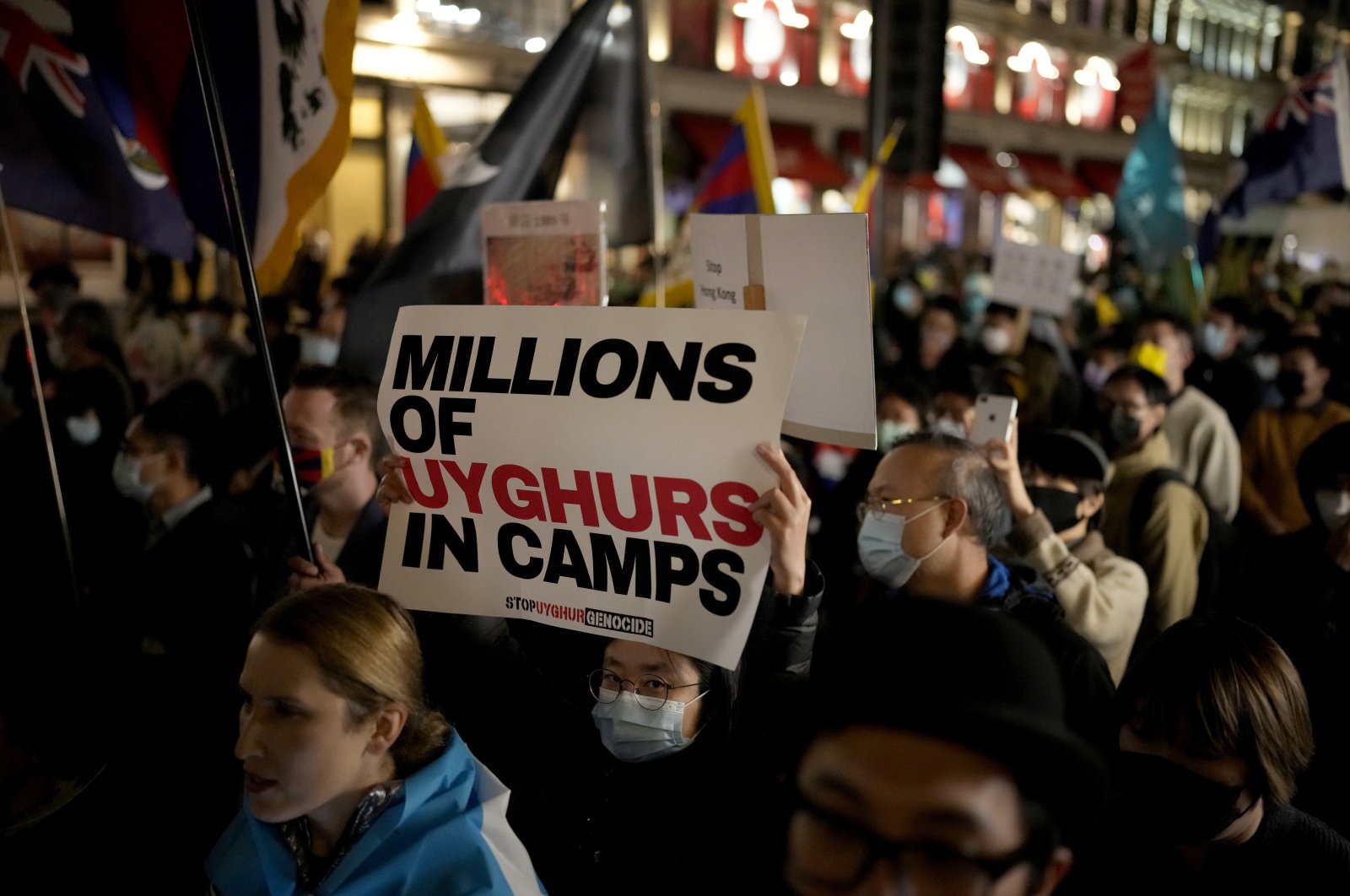 Demonstrators supporting Tibetans, Uyghurs and Hong Kongers take part in a protest against the Chinese Communist Party (CCP) to coincide with the 72nd National Day of the People's Republic of China, as they march along Regent Street towards the Chinese Embassy, in London, Friday, Oct. 1, 2021. (AP Photo/Matt Dunham)
by DAILY SABAH WITH AA Oct 28, 2021 11:39 am
RECOMMENDED

Turkey will not listen to lectures from those who violate international human rights laws, the country's United Nations permanent representative said Thursday, rejecting claims of Turkey's violations of human rights in Syria.

China's deputy permanent representative to the United Nations, Geng Shuang, called on Turkey at the Security Council's Syria session to comply with international humanitarian law, accusing Turkey of occupying northeastern Syria by holding Ankara responsible for the decrease in the water level in the Euphrates and the cuts in the Allouk water plant.

Responding to Geng's allegations, Ambassador Feridun Sinirlioğlu said: "We will not learn from those who violate international human rights law and humanitarian law."

Reiterating that the reason for the problems in the Allouk water facility was included in the report of the U.N. secretary-general, Sinirlioğlu pointed out that the terrorist organization PKK's Syrian branch YPG and the Syrian regime abused this issue for their own agendas.

Sinirlioğlu stated that the PKK/YPG is a major factor that destabilizes the field, attacking civilians and Turkey, and added that six civilians died as a result of a bomb attack in Afrin two weeks ago.

He stated that the PKK/YPG terrorist organization also prevented Syrian Yazidis and Syrian Kurds from returning to their homes.

Indicating that the PKK/YPG's attacks are not limited to Syria, Sinirlioğlu noted that the terrorist organization is using its presence in Syria to target Turkey.

After the joint statement at the U.N. last week in which 43 countries, including Turkey, expressed their concern about the human rights violations against the Uyghur Turks in the Xinjiang Uyghur Autonomous Region, China's statements targeting Turkey at the U.N. Security Council drew attention.

Forty-three countries, including Turkey, last week at the United Nations urged China to "ensure full respect for the rule of law" with regard to the Muslim Uyghur community in Xinjiang, where human rights violations remain "particularly" worrying.

"We call on China to allow immediate, meaningful and unfettered access to Xinjiang for independent observers, including the U.N. High Commissioner for Human Rights and her office," the countries said in a joint statement, read at the U.N. by France.

"We are particularly concerned about the situation in the Xinjiang Uyghur Autonomous Region," the statement said, citing "credible" reports that "indicate the existence of a large network of 'political reeducation' camps where over a million people have been arbitrarily detained."