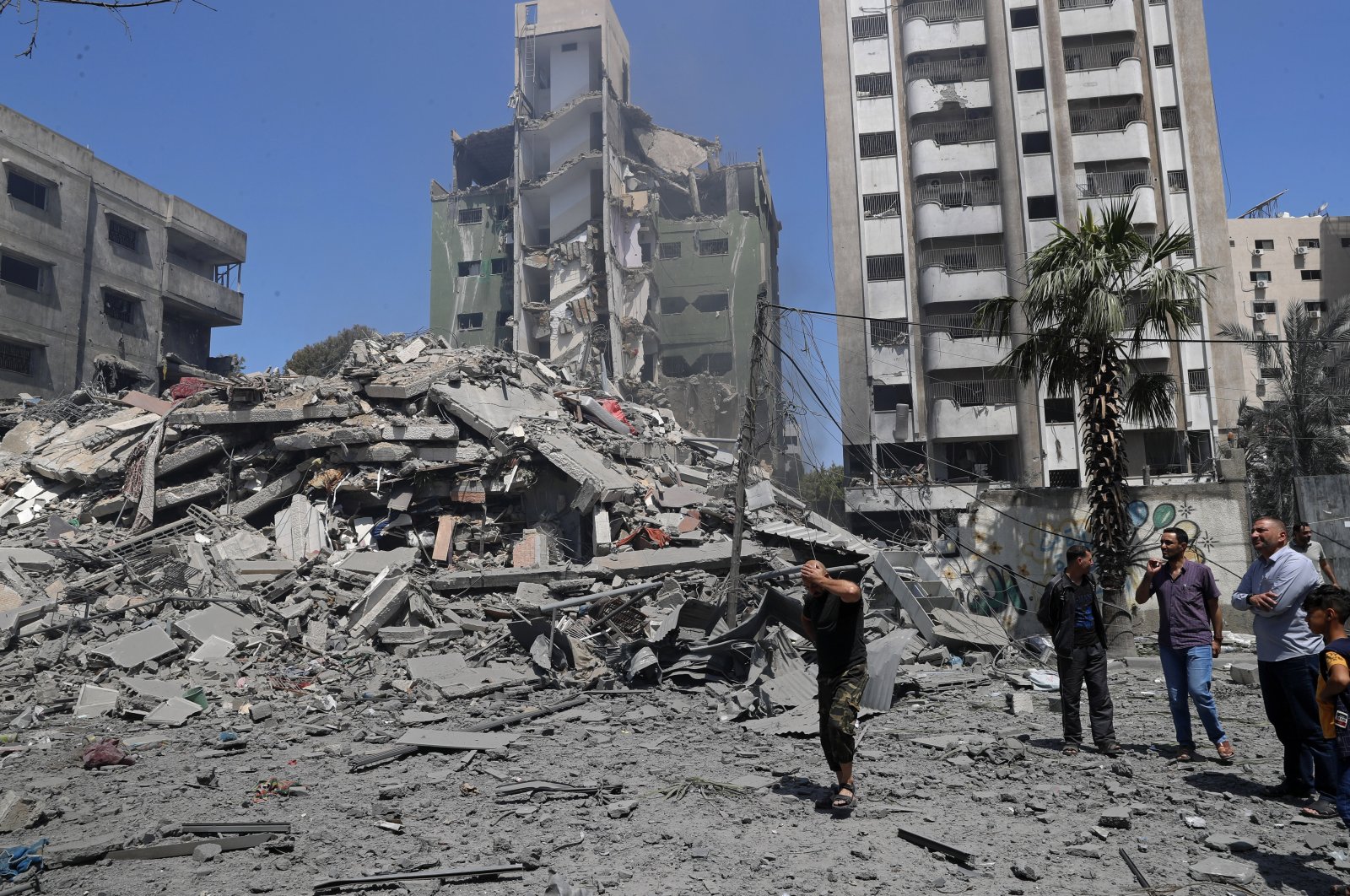 People inspect the rubble of a destroyed residential building that was hit by an Israeli airstrike, in Gaza City, Palestine, May 16, 2021. (AP Photo)
by DAILY SABAH WITH AA May 17, 2021 9:07 am
RECOMMENDED

Turkey's United Nations envoy criticized the global body for failing to come up with a statement on the Israeli-Palestine issue after the Security Council convened to discuss the problem, as Israel continues to target civilians and civilian infrastructure in Gaza.

"Failure to adopt even a press statement on an issue that has been on the council's agenda since almost its inception is simply unacceptable," said Feridun Sinirlioğlu, Turkey's ambassador to the U.N., in a written statement sent to the UNSC meeting on the conflict.

Sinirlioğlu strongly condemned Israel's aggression, including airstrikes, against Palestinians and conveyed condolences to the Palestinian nation for the loss of lives, including infants and children.

Decrying the Israeli attack on the U.N. Relief and Works Agency for Palestine Refugees (UNRWA) schools in Gaza, he said attacks on schools constitute war crimes.

"What can justify the council's current inaction in the face of such human carnage broadcast live on TV?" Sinirlioğlu said.

He noted that remaining silent in the face of Israel's indiscriminate attacks on Palestinians only served to encourage Israeli Prime Minister Benjamin Netanyahu, "prompting the occupier to launch its largest military operation targeting Gaza since 2014."

The envoy called on the UNSC to immediately stop Israel's attacks on Palestinians.

"It must also compel Israel to immediately allow humanitarian aid into Gaza for thousands of displaced Palestinians," he stressed, adding that the council can no longer escape its responsibilities toward the Palestinian people.

Highlighting Turkey's active multilateral efforts to galvanize the international community to stop the deterioration of the situation on the ground, Sinirlioğlu said Ankara is ready to provide full support to initiatives in the U.N. General Assembly in the coming days.

He said an international protection mechanism must be established to deter Israeli aggression and ensure the protection of Palestinian civilians.

"The General Assembly should lead the efforts for the establishment of an international protection mechanism for the Palestinian civilian population," he urged.

The death toll from Israeli attacks on Gaza Strip on Sunday rose to 197, including 58 children and 34 women, according to the Palestinian Health Ministry.

The number of injured has reached 1,235, while tens of buildings were destroyed or damaged.

Israeli warplanes on Saturday destroyed a building in Gaza City housing the offices of various media groups, including Qatari media group Al-Jazeera and the American agency The Associated Press (AP).

The offices of Mayadeen Company for media services, the radio station Voice of Prisoners and the Doha Media Center were also among the media offices destroyed by Israeli shelling.

In the past week, Israel has targeted the press and Turkish journalists, drawing condemnation from press institutions around the world.

The recent tensions that started in East Jerusalem in the Muslim holy month of Ramadan spread to Gaza after Palestinian resistance groups there vowed to retaliate against Israeli assaults on the Al-Aqsa Mosque and Sheikh Jarrah neighborhood if they were not halted.