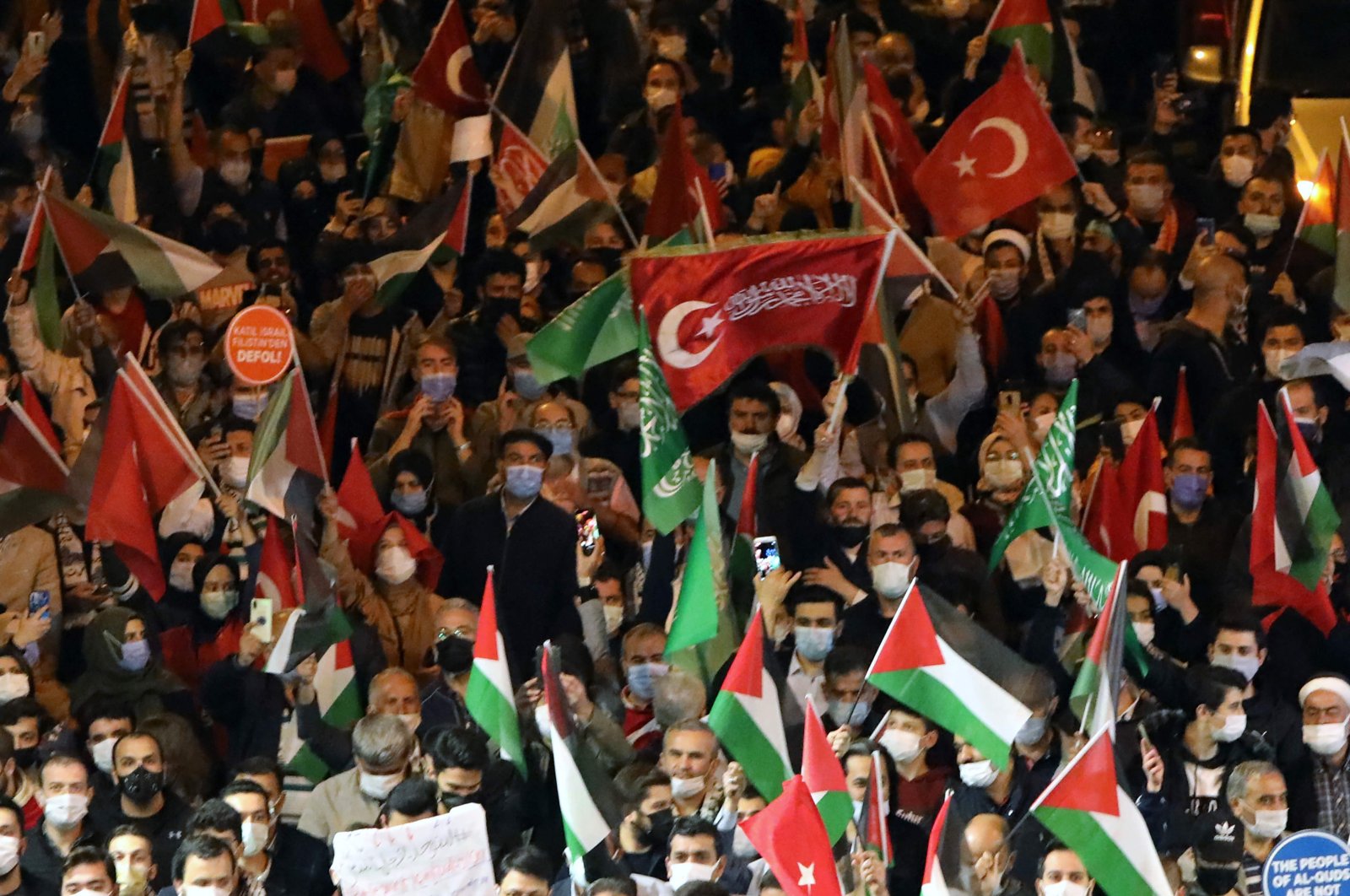 This file photo shows protesters holding Palestine and Turkish national flags and chant slogans during a demonstration outside the Israel Consulate General in Istanbul, Turkey, late on May 10, 2021. (AFP Photo)
by Anadolu Agency May 13, 2021 4:58 pm
RECOMMENDED

"Israel continues to commit crimes against humanity in Palestine. It targets the media for telling the world about Israel's policy of occupation and terror attacks,” Presidential Communications Director Fahrettin Altun said on Twitter following Israel's strikes.

"Having targeted Anadolu Agency in recent days, conducted an airstrike against the TRT Arabi office in Gaza to show that it has no respect for any value,” he added.

Altun condemned Israel's "state terrorism” and vowed to "do everything in our power to hold it accountable for all those crimes.”

TRT Arabi's Gaza office was targeted by Israeli airstrikes when a reporter was on air early Thursday, injuring several people.

Ongoing Israeli attacks on Gaza have killed 11 more Palestinians, taking the death toll to 83, according to the Palestinian Health Ministry. Fatalities include 17 children and seven women, while a total of 487 people have been injured to date, it said in a statement.

Tensions have been running high in the Sheikh Jarrah neighborhood of East Jerusalem since last week when an Israeli court ordered the eviction of Palestinian families. The decision was later postponed.

There have been protests in solidarity with residents of the neighborhood have been targeted by Israeli forces, who raided Al-Aqsa Mosque and sided with far-right Israelis and settlers attacking Palestinians.

The Turkish Cooperation and Coordination Agency (TIKA) also reported heavy damages to its office earlier when Israeli jets struck a building nearby.

Boyraz, a veteran journalist with eight years of experience with the agency, was shot in the foot with a plastic bullet on May 7 while covering a raid on the Haram al-Sharif area in occupied East Jerusalem, which includes Al-Aqsa Mosque. This Monday he was shot in the leg with two rubber bullets in another Israeli police raid on the flashpoint mosque.

He was one of four AA journalists formerly attacked by Israeli police.

Correspondent Esat Fırat, who has worked for the agency since 2016, and two photographers were targeted on Monday while covering Israeli security forces' attacks on worshipers at Al-Aqsa.

Fayez Abu Rumaila, an AA photojournalist working in occupied East Jerusalem since 2018, was attacked by Israeli occupation forces while covering clashes at the Al-Aqsa Mosque complex.

Mustafa AlKharouf, another AA photojournalist who has covered Jerusalem since 2017, said he was hit by a rubber bullet in the chest while providing aid to an injured medic.

AlKharouf said Israeli forces pushed them outside Al-Aqsa Mosque, adding that when he left Jerusalem's Old City and headed toward his vehicle near the wall of Al-Rahma Cemetery, he found a medic injured by shrapnel from a stun grenade.

"While carrying out their professional duties, four of our reporters sustained serious injuries. Our journalists chronicling the events on the ground while abiding by the principles of journalism are facing a frightening situation," said Serdar Karagöz, AA's director-general, in a letter to other news agencies.

In response to Karagöz's letter, the EANA called on Israel "to secure journalists' physical integrity and working conditions even during these hard times."

"The Board of EANA learned that four journalists of Anadolu experienced dangerous situations and injuries during a clash between Israeli police and protesters in East Jerusalem, and strongly calls on authorities to protect their physical integrity and working conditions," the European news agency said.

The agency noted that allowing journalists to perform their duties shows governments and states' "willingness towards transparency and manifest support of democratic values."

"Journalists should be allowed to do their jobs without fear of injury or pressure of any kind," it added.

OANA President CHO Sung-boo, in a letter to Karaöoz, said: "It is gravely disturbing and regrettable that Anadolu Agency journalists were seriously injured while carrying out their duties."

Additionally, the board of directors of ABNA-SE expressed deep concern "over respect for press freedom to provide coverage of events."

The international news agency also urged "authorities to allow journalists to carry out their noble mission of covering the truth."