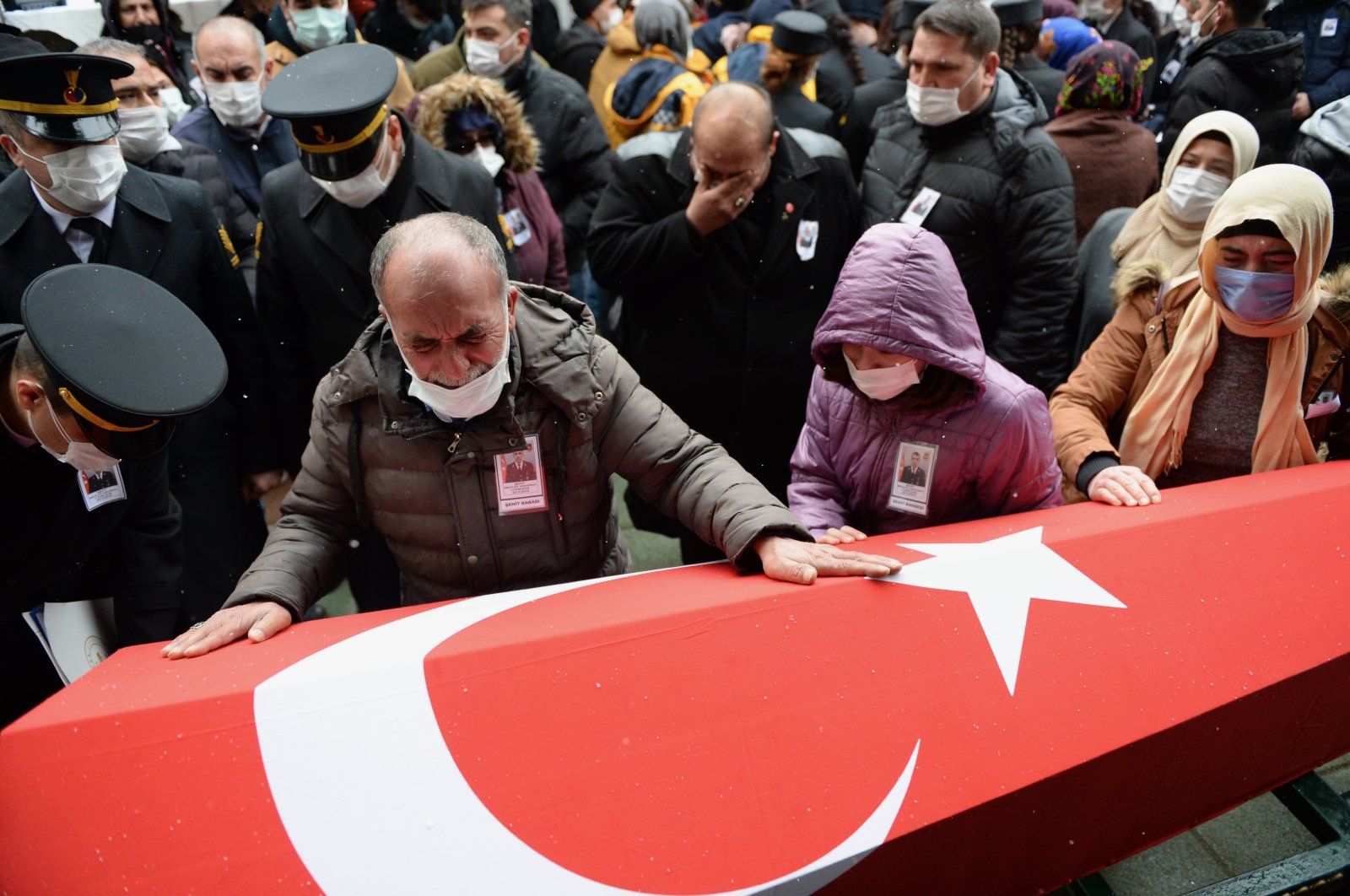 The funeral of Gendarmerie Specialist Sgt. Mevlüt Kahveci who was executed by the PKK terrorist group in northern Iraq's Gara region, in Eskişehir, Turkey, Feb. 15, 2021. (AA Photo)
by DAILY SABAH WITH AA Feb 16, 2021 10:43 am
RECOMMENDED

A steady stream of condemnations continues to come in from all around the world over the execution of 13 Turkish citizens by the PKK terrorist organization in Iraq's northern Gara region.

One of the most recent messages came from the Turkic Council on Monday. In a statement, the council's Secretary-General Baghdad Amreyev "strongly condemned" the treacherous terrorist attack.

"I wish God's mercy on the martyrs who lost their lives in this heinous attack, convey our condolences to their families and the people of Turkey and wish a speedy recovery to the wounded," he said.

Amreyev underlined that the Turkic Council considers terrorism a "crime against humanity" and reiterated the council's "firm support to brotherly Turkey" in its resolute fight against terrorism.

"We offer our condolences to the families of the martyrs, the people of Turkey, and the Turkish state," he said. "May Allah protect Turkey from all kinds of evil."

The Palestine Scholars Association in the Diaspora also condemned "the treacherous terrorist crime."

Bosnia-Herzegovina was another nation to denounce the brutal killing on Monday.

"We extend our sincere condolences to the President of the Republic of Turkey, Recep Tayyip Erdoğan, the families of the victims and the entire Turkish people," the Bosnian Presidency said in a statement.

Upon the announcement, a series of condolences poured in from Turkey's friends and allies.

"We would like to offer our condolences to the Turkish people and express our heartfelt sympathies to the families of the victims," he added.

The Afghan Foreign Ministry in a statement described the targeting and killing of civilians as contrary to humanity and Islamic values.

The U.S. State Department issued a statement on the incident, saying that the U.S. stands with its NATO ally Turkey and offered its condolences to the families of those who lost their lives in northern Iraq.

"The United States deplores the death of Turkish citizens ... We stand with our NATO ally Turkey and extend our condolences to the families of those lost in the recent fighting. If reports of the death of Turkish civilians at the hands of the PKK, a designated terrorist organization, are confirmed, we condemn this action in the strongest possible terms," it said.

Another NATO ally, the U.K., also shared its condolences.

Other states that also reached out to Turkey in light of the attack were Somalia, Bulgaria, Iran and Qatar.