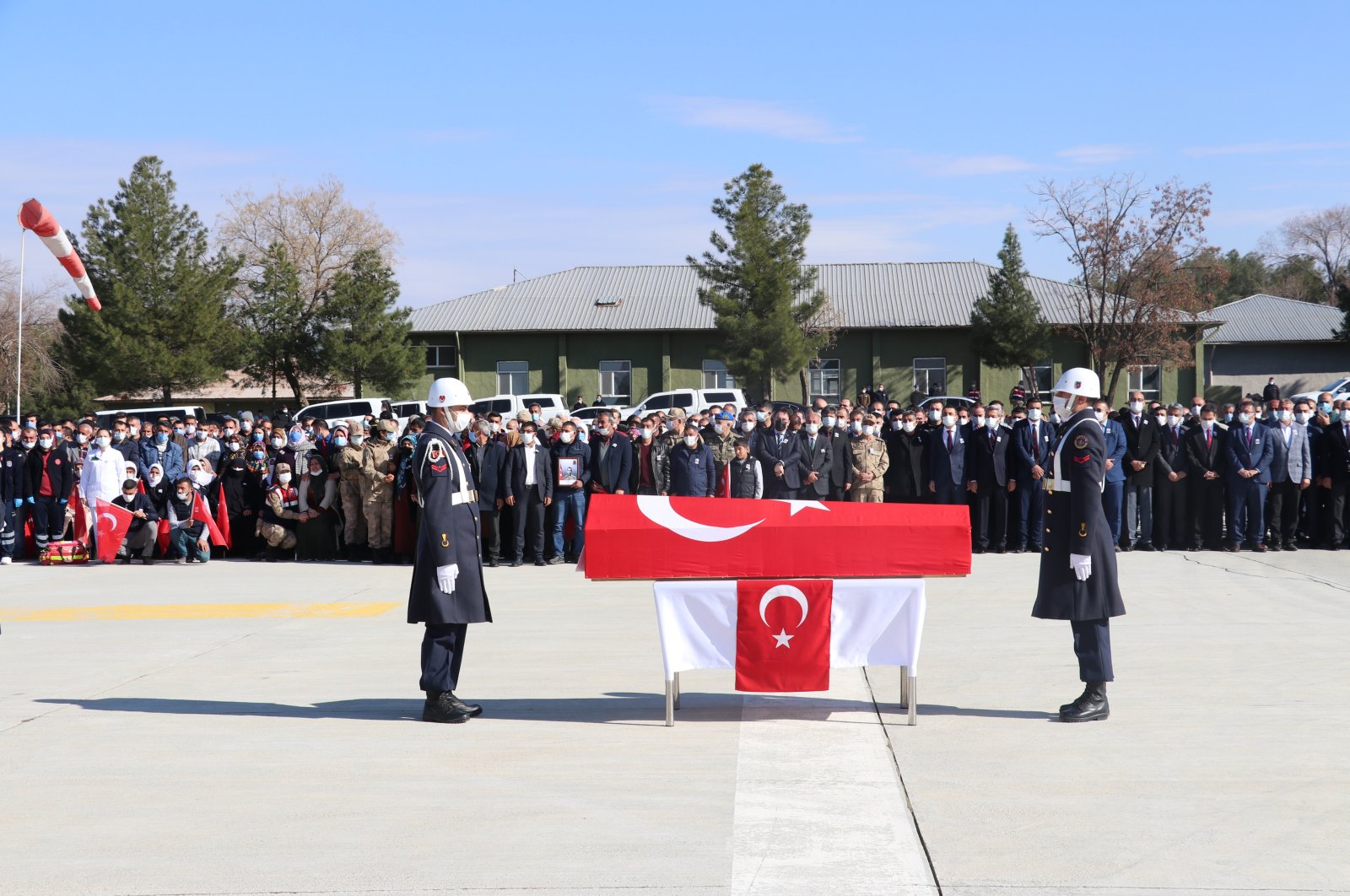 A funeral ceremony is held for a Turkish citizen who was executed by the PKK terrorist group in northern Iraq's Gara region, in Siirt province, southeastern Turkey, Feb. 15, 2021. (AA Photo)
by DAILY SABAH WITH AA Feb 15, 2021 11:09 am
RECOMMENDED

Turkey received messages of condolence from around the world over a terror attack in which 13 Turkish citizens were killed by the PKK terrorist organization in Iraq's northern Gara region.

"On the occasion of this tragedy, on my own behalf and on behalf of the people of Azerbaijan, I extend my deepest condolences to you, the families and the loved ones of those who were killed and the brotherly people of Turkey," he added.

Azerbaijan's Ambassador to Turkey Khazar Ibrahim also extended his condolences to Turkey in a statement on Twitter.

"Those who fought against Azerbaijani military in Karabakh were the same terrorists," he added.

In a statement, Saner called on all countries to cooperate in order to wipe out terrorism as soon as possible.

The U.S. State Department issued a statement on the incident, saying the U.S. stands with its NATO ally Turkey and offering its condolences to the families of those who lost their lives in northern Iraq.

"The United States deplores the death of Turkish citizens (...) We stand with our NATO ally Turkey and extend our condolences to the families of those lost in the recent fighting. If reports of the death of Turkish civilians at the hands of the PKK, a designated terrorist organization, are confirmed, we condemn this action in the strongest possible terms," it said.

One of Turkey's other NATO allies, the U.K., also extended condolences.

The Pakistan Embassy in Ankara said on Twitter, "We strongly condemn the heinous atrocity committed by PKK which abducted and later martyred 13 Turkish citizens. Our heartfelt condolences to the bereaved families and the Turkish nation."

Somali Justice Minister Abdulkadir Mohamed Nur offered his condolences to Turkey, saying: "Just like Turkey, Somalia has been fighting terrorism for many years and has given hundreds of thousands of innocent victims to terrorism."

"So, as a Somali, I deeply feel and share the pain of the Turkish nation," he added.

Bulgaria's Muslim affairs authority also conveyed its condolences to Turkey over the attack.

"We strongly condemn the brutal murder of 13 Turkish civilians kidnapped by the PKK terrorist organization in the Gara region of northern Iraq," it said.

The Iranian Foreign Ministry spokesperson Saeed Khatibzadeh also told a press conference in Tehran: "We condemn the killing of Turkish citizens in the terrorist attack."

He noted that through this "act of terrorism", the PKK targeted Turkey, a "friend and brother" of Iran.

"We hope not to witness any more violence and heinous terrorism in our region," he said.

Countries in the region should respect Iraq's territorial integrity and sovereignty, Khatibzadeh added.

"Qatar reiterates its firm rejection of violence and terrorism regardless of the motives and reasons," the Gulf country's foreign ministry also said in a statement.

Despite condolences from some countries, many international actors remained silent or hesitated to send genuine messages over the PKK terrorist attack.

Regarding the issue, Turkey's foreign minister on Monday strongly criticized the Western countries over their "double standards" and "selective approach" to terrorism.

The top Turkish diplomat shared his message both in Turkish and English.

Later in another statement, Çavuşoğlu also said that countries claiming to be fighting terrorism are either silent on the PKK massacre or trying to paint over it.

“Countries claiming to be fighting terrorism are either silent on PKK massacre or trying to slur over it with ifs and buts,” he said.

Turkish officials consistently criticize Western counterparts for their selectivity and using “buts and ifs” in condemning terrorist acts. They argue that terrorism needs to be strongly condemned regardless of who the perpetrators are.

Turkey will continue undeterred in its fight against terrorist organizations both in the country and abroad, Çavuşoğlu asserted in his speech alongside his Ethiopian counterpart Demeke Mekonnen during the opening of a new building for the Ethiopian Embassy in the capital Ankara.

“We have never been hypocritical like many Western countries,” he added.

Appalled by the actions of the PKK, Turkey as a nation expressed its united stance once again against any form of terrorism and issued a strong message of unity and solidarity.

While the hashtags "PKKisaHeinousTerroristOrganisation" and "PKKExecutesCivilians" became trending topics on Twitter, Turkish officials also decried the execution of 13 Turkish citizens in a cave in northern Iraq and reiterated their determination in the fight against terrorism.

"PKK, a designated terrorist organization in Turkey, the United States and the European Union, murdered 13 Turkish citizens who were held in northern Iraq. They were brave sons of Turkey, a key NATO ally and a key contributor to the global war on terror," Turkey's Communications Director Fahrettin Altun said on Twitter.

Noting that Turkey will continue its counterterrorism efforts with "unwavering determination until the terror threat is completely and permanently eliminated," Altun said necessary steps will also be taken against those promoting and encouraging terrorism at home and abroad.

He also criticized Western nations for their "deafening silence" on the incident.

"The West's deafening silence in the face of the PKK's terrorist attacks and heinous crimes, too, serves as a reminder that there is a big difference between talking about democracy, rights and the law, and actually supporting those principles. Hence your utter lack of credibility," he said.

"Our revenge will be painful. Our justice will be swift," he added.

"The world is silent. This silence is a shameful act of complicity. But we will not remain silent," he added.

Interior Minister Suleyman Soylu wished Allah's mercy upon the martyrs and said the terrorist group will pay for its crimes.

"Let this nation and our martyrs spit on our faces if we do not catch (PKK ringleader) Murat Karayılan and shred him to a thousand pieces," Soylu said in a tweet.

The PKK managed to establish a foothold in Iraq, particularly in the Sinjar region, in mid-2014 on the pretext of protecting the local Yazidi community from Daesh terrorists. Since then, the PKK has reportedly established a new command base in Sinjar to carry out logistical activities.

Recently, Akar expressed that Turkey was prepared to provide assistance to Iraq in clearing terrorists from the region. Iraq's Kurdistan Regional Government (KRG) has called the PKK's presence in Sinjar unacceptable and urged the militants to leave the area.

Forty-eight PKK terrorists, including two senior members, were eliminated during the "extremely special and critical" operation in the Gara region, Akar said.

Akar said the region was mostly cleared of the terrorist group.

"The operation has been completed. Our land and air elements returned to their bases and barracks safely," he said.

During the campaign, more than 50 terrorist targets, including ammunition depots, caves and bases in Gara were destroyed, he added.

Three Turkish soldiers were killed and three others injured in the land operation, noted Akar.