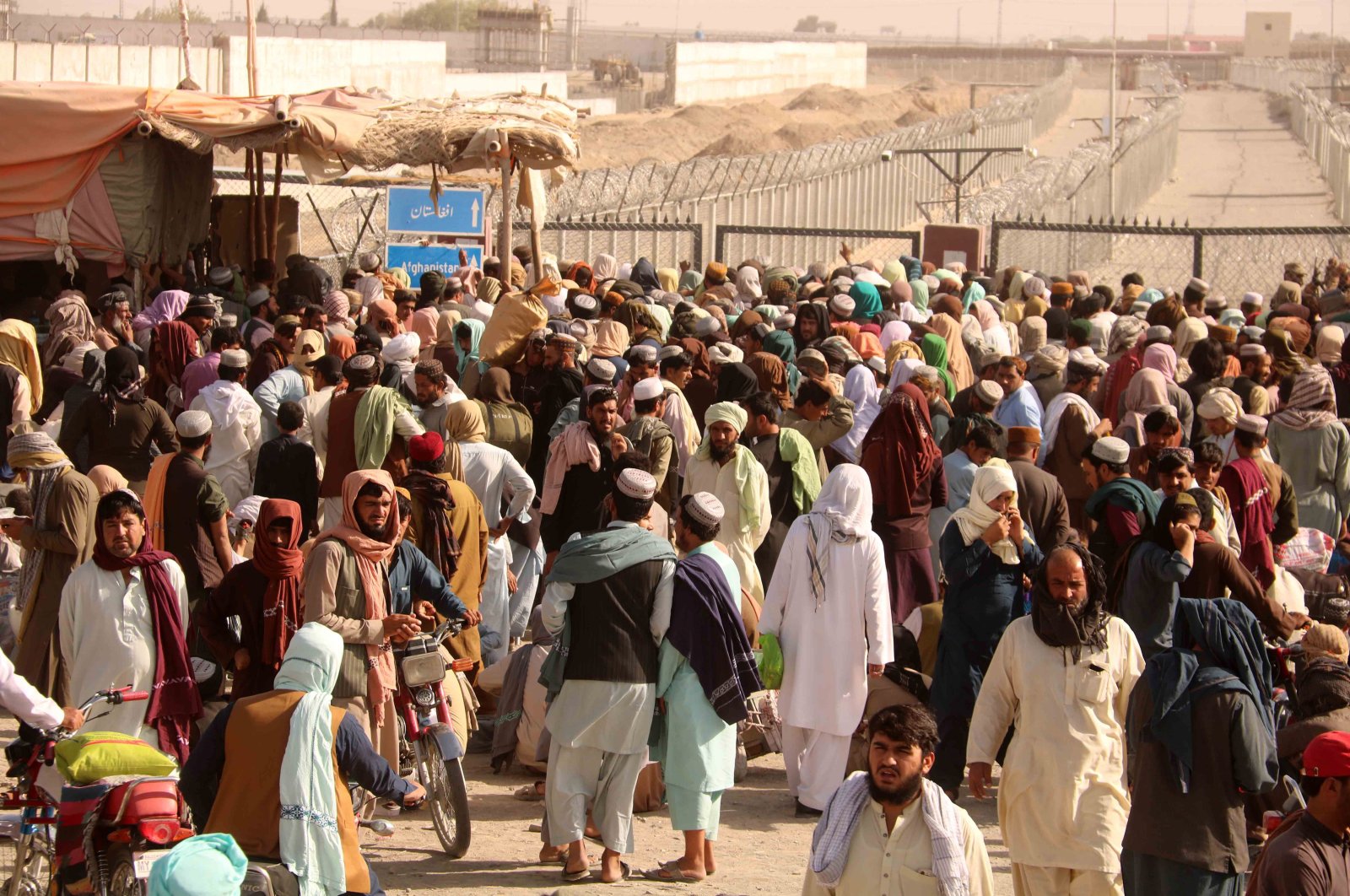 People stranded at the Pakistani-Afghan border wait for its reopening after it was closed by the Taliban, who have taken over the control of the Afghan side of the border at Chaman, Pakistan, Aug. 11, 2021. (EPA Photo)
by Betül Usta Aug 11, 2021 2:45 pm
RECOMMENDED

Turkey is set to increase measures against illegal migration, as diplomatic sources stated that irregular migration originating from the situation in Afghanistan must be handled through regional solutions.

Turkey has been a key transit point for asylum-seekers who want to cross into Europe to start new lives, especially those fleeing war and persecution. Ankara has recently seen an increase in refugees, particularly from Afghanistan.

Turkey has deployed additional reinforcements to its eastern border with Iran and new measures are expected to be applied. The border security will be supported by technological systems.

As recently announced, to ensure the safety and security of the Turkish-Iranian border, a 295-kilometer (183-mile) long wall will be constructed along the entire shared border. It is hoped that the wall will help to prevent illegal crossings and the trafficking of contraband and that it will also hinder terrorists from infiltrating the country.

Also, Turkish authorities plan a three-stage system to curb the migration wave. Surveillance, patrol, control and ambush activities of border units take place in the first leg of the three-stage barrier system established within the scope of combating illegal immigration. In the second stage, there is a mobile ambush and patrol in the back region with commandos, and in the third stage, the capture and deportation of passers-by with the coordination of the Gendarmerie and the relevant units of the Turkish Armed Forces (TSK).

Diplomatic sources note that the solution to the problem of illegal immigration originating from Afghanistan should be found between the countries of the region.

The European Union countries stand out among the countries that Afghans prefer to immigrate to. In this context, the governments of the Netherlands, Austria, Germany, Belgium, Denmark and Greece demanded that the citizens of Afghanistan, whose asylum applications were rejected and who exhausted all legal remedies, be returned to their country.

Adelbert Jahnz, one of the spokespersons of the EU Commission, also stated that the return of Afghans whose asylum applications were rejected is not at the disposal of the bloc and depends on the decisions to be taken by the member states.

While the uncertainty regarding asylum applications and illegal immigration within the EU continues, Ankara has stated that the European Union, which has not yet established migration mechanisms at the end of its NATO mission, should work to ensure that it is not "caught unprepared" as in the wave of migration from Syria.

Turkey underlines that it will not bear the burden of the migration crises experienced as a result of the decisions of third countries. In this context, security measures are being increased at the borders, and advanced technology products, including drones and planes, are being used to detect illegal immigrants. Border troops have been reinforced, especially against a possible increase in the illegal crossing point on the Iranian border. Cameras, thermal cameras, radar, binoculars and camera traps and other reconnaissance and surveillance tools are also used extensively at the borders.

Turkey's Foreign Ministry recently rejected an "irresponsible decision taken by the United States" regarding Afghan refugees. Ankara criticized the U.S. program to offer potential resettlement to Afghans who may be targets of Taliban violence due to their affiliations, saying the move would cause a "great migration crisis" in the region.

Turkey's Foreign Ministry said in a statement it rejected a reference to Turkey as a migration route for Afghans, and added that Turkey – the world's leading host for refugees with more than 4 million migrants – would not "undertake a new migration crisis on behalf of a third country."

Turkey and Iran are the countries most affected by the migration problem caused by increasing tensions resulting from the advance of the Taliban in Afghanistan, Turkey's Parliament Speaker Mustafa Şentop stated last week.