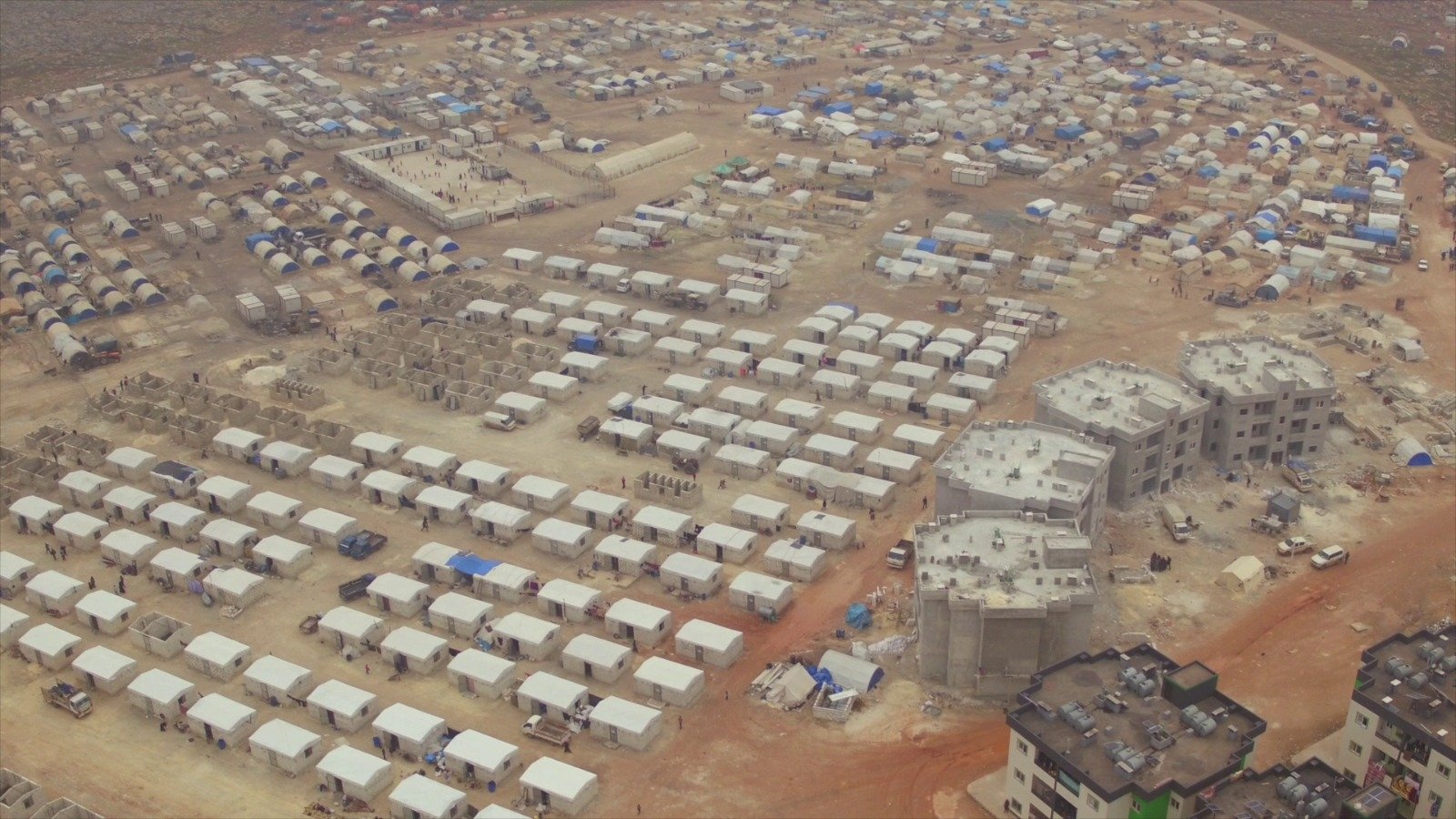 As part of the "Bağcılar Neighborhood" project, the construction of 450 briquette houses was completed in northwestern Syria's Idlib, June 10, 2021. (AA Photo)
by DAILY SABAH WITH AA Jun 10, 2021 1:24 pm
RECOMMENDED

A Turkish municipality has built a neighborhood with 450 briquette houses in northwestern Syria's opposition-held Idlib province.

Istanbul's Bağcılar district municipality came forward to ease the humanitarian catastrophe in Idlib, where millions of people who fled their homes due to the Bashar Assad regime's attacks live in overcrowded tent camps or in open spaces.

The municipality contributed to the Humanitarian Relief Foundation's (IHH) briquette homes project. As part of the "Bağcılar Neighborhood" project, which was launched in January 2020 in the rural Soran region, the construction of 450 briquette houses has been completed. The 1+1, 24-square-meter (258.34 square feet) are made of durable materials.

Families from Idlib, who were victims of war, have now been placed in all 450 houses. Families leaving the tents are happy to have a good life in their new homes.

Bağcılar Mayor Lokman Çağırıcı said they stand by everyone who is in trouble, no matter where in they are in the world.

He noted that they built housing for the refugees who migrated to the regions close to the Turkish border due to the conflicts in Idlib. "I thank God for being instrumental in such a beneficial event at a time when humanity is going through a difficult period. Our Syrian brothers have now found their comfortable homes. I hope the troubles in the region will end as soon as possible," Çağırıcı said.

The lives of the Syrian people, dealing with numerous difficulties in rural Idlib's tent camps, have become much harder due to the ongoing pandemic. As the humanitarian catastrophe in the region reaches new heights, people try to survive by taking shelter under trees or shaky tents built on mud and puddles.

Millions of displaced people in the region also need urgent humanitarian medical assistance. Although Turkish officials and charities continue their efforts to provide humanitarian aid, there are still thousands more who need urgent assistance from the international community.

Nearly 75% of the total population in the Idlib region depends on humanitarian aid to meet their basic needs as 1.6 million people continue to live in camps or informal settlements, the United Nations Office for the Coordination of Humanitarian Affairs (OCHA) recently said.

For 10 years, the Bashar Assad regime has ignored the needs and safety of the Syrian people, only eyeing further territorial gains and crushing the opposition. With this aim, the regime continues to bomb vital facilities such as schools, hospitals and residential areas, causing the displacement of almost half of the country’s population while adopting policies to ensure their lives are more difficult.

Since December 2019, almost 1 million people have fled the Assad regime’s offensive on Idlib, considered the last opposition bastion, with many seeking refuge in overcrowded tent camps near the Turkish border.

A fragile truce was brokered between Moscow and Ankara in March 2020 in response to the months of fighting by Russia-backed forces, but the regime still carries out attacks on civilians, hindering most from returning to their homes and forcing them to seek safety at makeshift camps.