Over 3M people in Idlib depend on aid to meet basic needs: OCHA 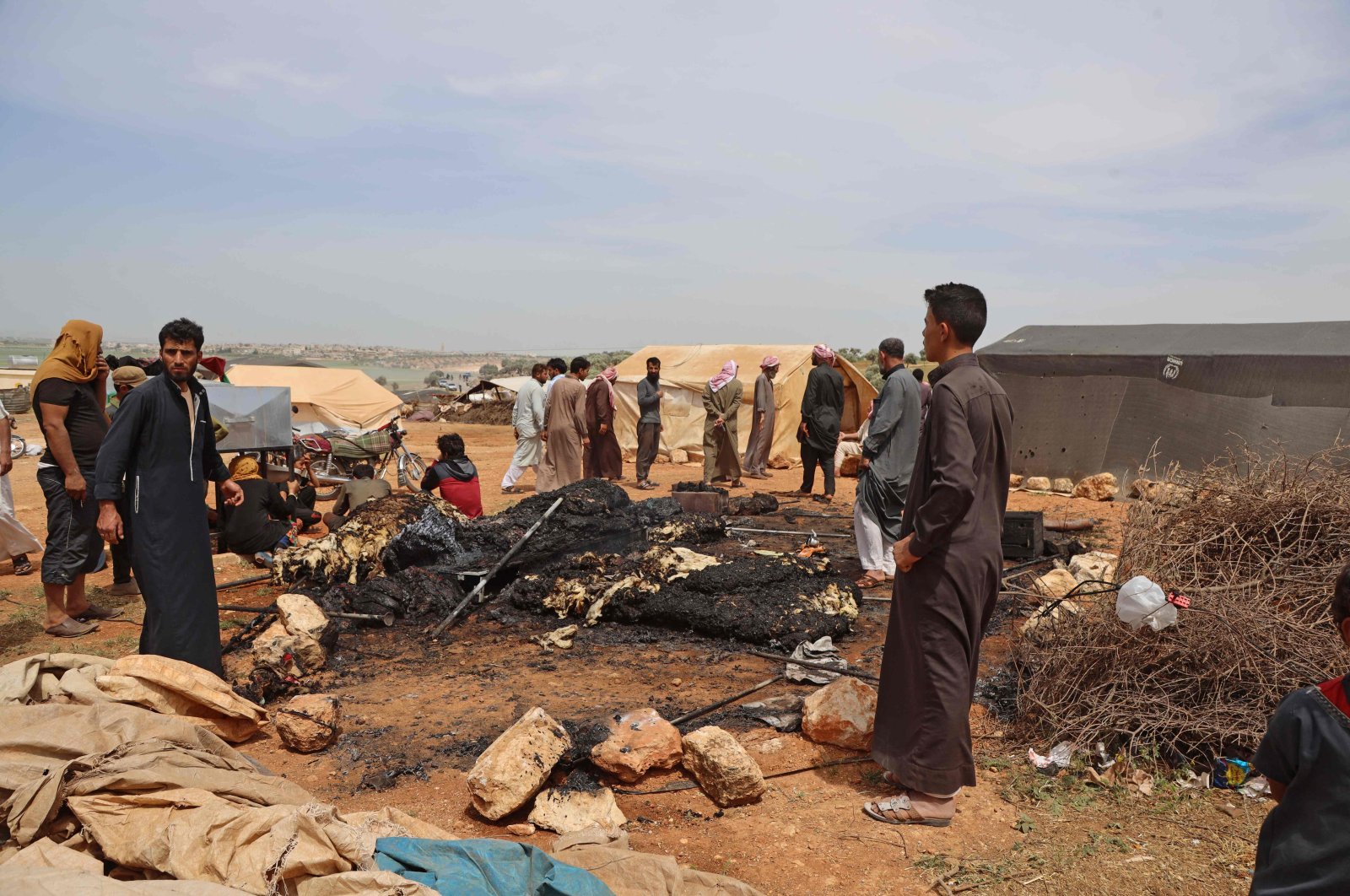 Syrian men survey the damage after a fire following a reported explosion in a depot close to a camp for the internally displaced near al-Fua, in the country's northwestern Idlib province, May 3, 2021. (AFP Photo)
by Eralp Yarar May 24, 2021 1:06 pm

Despite ongoing efforts to provide humanitarian aid in northwestern Syria, there are still millions who need urgent assistance from the international community

Nearly 75% of the total population in northwestern Syria's opposition-held Idlib region depend on humanitarian aid to meet their basic needs as 1.6 million people continue to live in camps or informal settlements, the United Nations Office for the Coordination of Humanitarian Affairs (OCHA) said.

An OCHA official told Daily Sabah that an estimated 3.4 million people, out of northwestern Syria total of 4.2 million population, are in need of aid. Almost 2.7 million are internally displaced, of which 1.6 million live in camps or informal settlements.

Many of these (camps) are overcrowded and needs are particularly high. Of the total population (4.2 million) approximately 75% depend on humanitarian aid to meet their basic needs, said the U.N. body.

According to OCHA, the cross-border operation reaches almost 85% of these people every month, while the U.N. and international non-governmental organizations (NGO) reached some 2.4 million people every month in 2020 and 2021.

The lives of the Syrian people, dealing with numerous difficulties in rural Idlib's tent camps, have become much harder due to the ongoing pandemic. As the humanitarian catastrophe in the region reaches new heights, people try to survive by taking shelter under trees or shaky tents built on mud and puddles. Many Turkish NGOs and state agencies continue to provide vital humanitarian aid and conduct humanitarian efforts in the region. Millions of displaced people in the region also need urgent humanitarian medical assistance.

The U.N. has also been providing aid to northwest Syria through Turkey since 2014, enabled by the Security Council Resolution 2165 and effectively renewed each year since. Under the Resolution, 37,405 trucks of assistance have been provided from Turkey. In the past, there has also been assistance provided from Jordan and Iraq. Currently, around 1,000 trucks of assistance are provided each month via the Bab al-Hawa border crossing, the only remaining border crossing for cross-border humanitarian assistance under the current resolution, according to OCHA.

The assistance provided in the region includes food supplies, medical equipment, water and sanitation supplies, tents, blankets, non-food items, agriculture supplies and similar items, the OCHA stated adding that in addition to sending supplies, the resolution also allows the U.N. to fund the salaries of doctors and teachers, run programs for survivors of gender-based violence, provide operating costs for health facilities and similar support that is not commodity-based.

As OCHA stated, these programs are implemented by NGOs on the ground. In addition to this, the NGOs also provide a huge level of assistance directly. In addition to the Red Crescent/Red Cross movement, more than 40 international NGOs, over 150 Syrian NGOs and a number of Turkish NGOs work in northwest Syria.

Last year, the U.N. warned that a halt to cross-border aid deliveries to Syria’s last opposition bastion Idlib would cause suffering and death. Yet, ignoring all calls, Russia accused the U.N. and Western nations of trying to “sabotage” assistance from within Syria.

"The northwest continues to suffer a major humanitarian crisis. The cross-border operation needs to be scaled up further," U.N. humanitarian chief Mark Lowcock had said, underlining that millions of people in the opposition-held northwest require humanitarian assistance, with growing economic hardship aggravated by the COVID-19 pandemic.

In January 2020, Russia scored a victory for its ally Syrian regime, using its veto threat to force the Security Council to adopt a resolution reducing the number of crossing points from Turkey to the northwest for aid deliveries from four to just two. It also cut in half the yearlong mandate that had been in place since cross-border deliveries began in 2014 to six months.

Russia’s U.N. Ambassador Vassily Nebenzia said at the time that cross-border aid is not the “magic bullet” for humanitarian problems in Syria but “has become a political tool for drawing lines of division inside Syria.” He said cross-border deliveries are “incompatible with international law and humanitarian principles.”

In addition to international efforts of cross-border humanitarian aid, several Turkish NGOs and state agencies have been spending efforts to build cinder block houses for displaced people in Idlib. Back in June 2020, Turkish President Recep Tayyip Erdoğan pledged to fund the construction of 50 cinder block homes for civilians in Idlib, saying Turkey planned to fulfill the target during the summer so the shelters would be ready for the refugees before winter sets in. Since then, multiple humanitarian agencies from Turkey have participated in the construction of the cinder block houses, among other aid services.

"OCHA and humanitarian partners continue to strongly advocate for better, more dignified, emergency locally built shelters in northwest Syria, through a range of shelter options that are appropriate to a range of shelter needs. These include immediate, life-saving interventions, as well as humanitarian shelter solutions that reflect situations of protracted displacement and build on the choices that are already being made by IDPs (internally displaced people) themselves," the OCHA official said.

"The need for infrastructure support in northwest Syria is still significant, especially for the sites that have been established by the IDPs themselves. The majority of IDP sites are currently 'self-settled,' meaning that they often lack proper site planning, infrastructure and camp management systems. Innovative solutions that are within the framework of humanitarian work are crucial to help meet people’s needs," it added.

Regarding the effects of the pandemic amid the ongoing vaccination efforts, the OCHA said it is clear that COVID-19 is a driver and multiplier of humanitarian needs across Syria.

"As the virus continues to spread throughout the population, it is the most vulnerable who suffer the most – particularly those living in densely populated IDP camps and informal settlements across northwest Syria, where basic service provision is weakest."

Also, UNICEF, in a report shared with Daily Sabah, stated that Syria has so far received 256,800 doses of the COVID-19 vaccine, with the first COVAX delivery of vaccines to reach the war-torn country. This delivery of AstraZeneca vaccines was given to frontline health workers across Syria, including in the northeast and northwest, it added.

The World Health Organization (WHO) has said the vaccination campaign in Syria aims to inoculate 20% of the total population residing in the country by the end of the year.

Since December 2019, almost 1 million people have fled the Assad regime’s offensive on Idlib, considered the last opposition bastion, with many seeking refuge in overcrowded tent camps near the Turkish border. A fragile truce was brokered between Moscow and Ankara in March 2020 in response to the months of fighting by Russia-backed forces, but the regime still carries out attacks on civilians, hindering most from returning to their homes and forcing them to seek safety at makeshift camps.