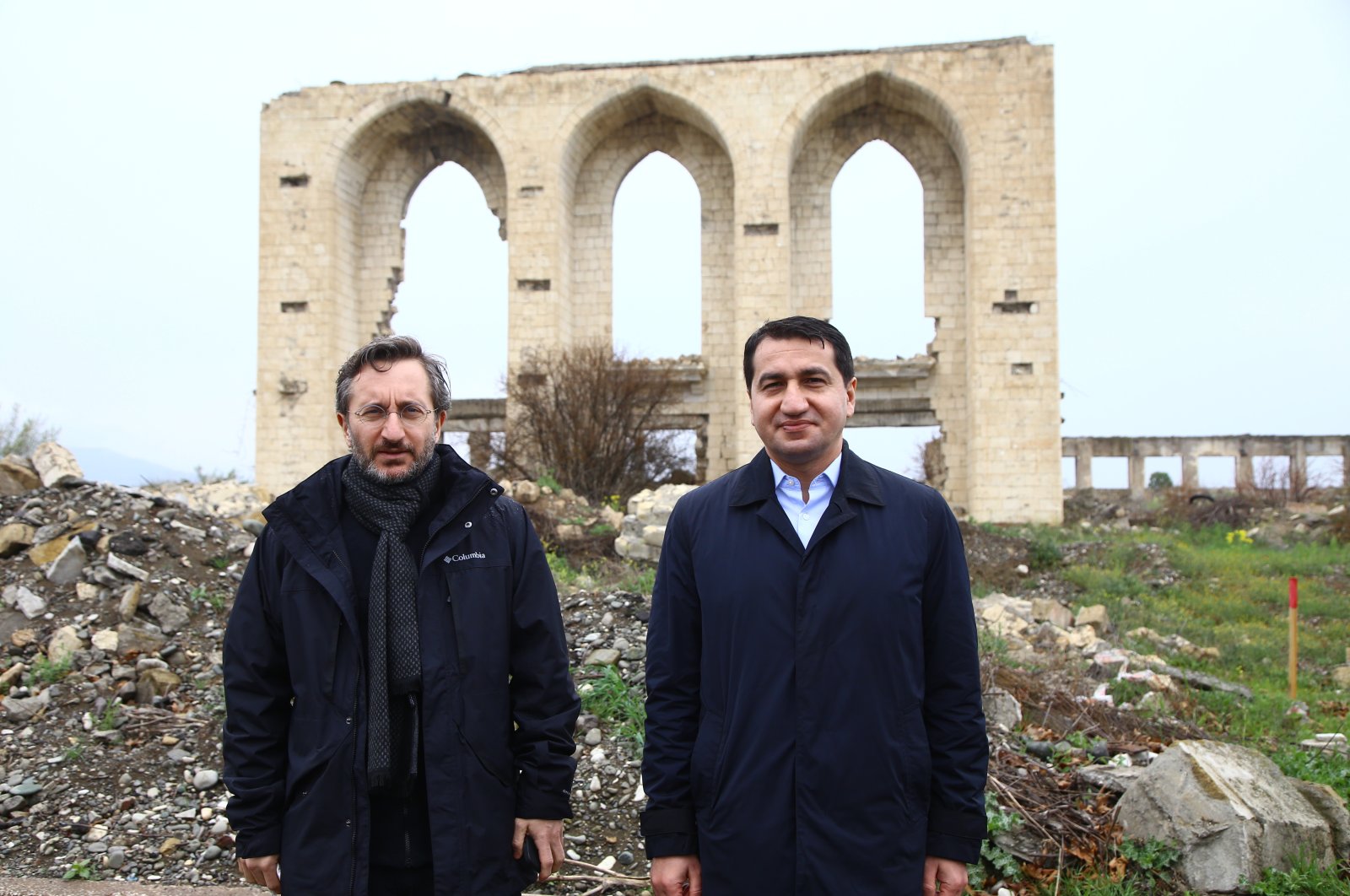 Presidential Communications Director Fahrettin Altun (L) and Azerbaijani Vice President Hikmet Haciyev pose for a picture during a visit to the city of Aghdam in Azerbaijan, April 11, 2021. (AA)
by DAILY SABAH WITH AA Apr 11, 2021 2:51 pm
RECOMMENDED

Presidential Communications Director Fahrettin Altun and the representatives of Turkic Council member countries on Sunday visited the city of Aghdam in Azerbaijan, which was liberated from the Armenian occupation. During the visit, Altun said international organizations have ignored the destruction caused by the Armenians and that all international organizations, particularly UNESCO, should look at the situation in Aghdam without being hypocritical.

The 3rd Meeting of the Cooperation Council of Turkic Speaking Countries (Turkic Council) Ministers and Senior Officials in Charge of Information and Media was held in Baku, the capital of Azerbaijan. Altun also attended the meeting. Later, Altun visited the city of Aghdam, which was destroyed by the Armenian Army during the last year's Nagorno-Karabakh war, accompanied by the representatives of the member states of the Turkic Council.

During their visit to Aghdam, which had been under Armenian occupation for 27 years, the participants saw the destruction caused by the Armenians to settlements and cemeteries.

Speaking to journalists, Altun said that the visit to Aghdam made clear the magnitude of the Karabakh victory, adding: “We wish mercy from Allah to our martyred heroes and a long life for our veterans, and we are grateful to them. This victory of Azerbaijan is a victory for the region and Turkey. A 30-year occupation was terminated by the determined fight. With the determined stance of Azerbaijani President Ilham Aliyev, the occupation ended and the region was freed. Under the leadership of our President Recep Tayyip Erdoğan, Turkey gave support to this just struggle. Today we once again experienced the pride of this victory."

Noting the unprecedented level of destruction to the settlements and cemeteries in Aghdam the officials witnessed, Altun said: “While this barbarism was experienced on the one hand, we also saw how the world and the international community displayed a hypocritical attitude here. Look, the cultural treasures have been destroyed here, but the institutions that are responsible for protecting the cultural treasures in the world remained silent. They totally played three monkeys. These cultural treasures have been completely destroyed to erase the traces of Turkishness and Islam, but they have not succeeded, they will not succeed. Because these lands are the lands of the Turks and Islam. The cruelty of the tyrants and their barbaric policies could not find any response.”

Referring to the Armenian persecution in the occupied regions, Altun said: “Regardless, the right has been manifested. Azerbaijan, the real owner of these lands, took back its lands. By the will of Allah, our 1 million Azerbaijani brothers will return to these places.”

"On the one hand, we have to make permanent peace by ending the occupation. On the other hand, we have shown that as the real actors of the region, we will never allow such an invasion again. First of all, the infrastructure problems should be completely eliminated here and the zoning process should continue. The issue of transportation should also be solved completely and the economic infrastructure should be settled,” he expressed.

Stating that Aghdam and Shusha will be transformed into thriving centers once again, Altun said: “We stand by our Azerbaijani brothers with all our efforts in this regard. Our president directed all our institutions and organizations to support this process. I hope we will complete the process. Together, we will ensure the development of these places through cooperation."

Azerbaijani officials earlier expressed that Turkish companies would be prioritized in tenders in a bid to improve the quality of construction projects and that procedures for planned investments would be simplified.

The rebuilding process was already underway across the region and surrounding provinces liberated from Armenian occupation in late 2020 after six weeks of intense conflict. The two countries signed a Russia-brokered agreement on Nov. 10 to end the fighting and work toward a comprehensive resolution.

The peace deal prompted a political crisis in Armenia that led to intense calls for Prime Minister Nikol Pashinian to resign. Pashinian late last month announced he would resign in April and that he would remain in office until the snap parliamentary elections due to be held on June 20.

During the 44-day conflict, Azerbaijan liberated several cities and nearly 300 settlements and villages, which have fallen into a dilapidated state since the Armenian invasion in the early 1990s.

The government plans to revive the area, allowing for the return of the Azerbaijanis who once called the region home.

Around 1.5 million Azerbaijanis will return to the region thanks to the projects being carried out in the areas of infrastructure, agriculture, energy, education and health.