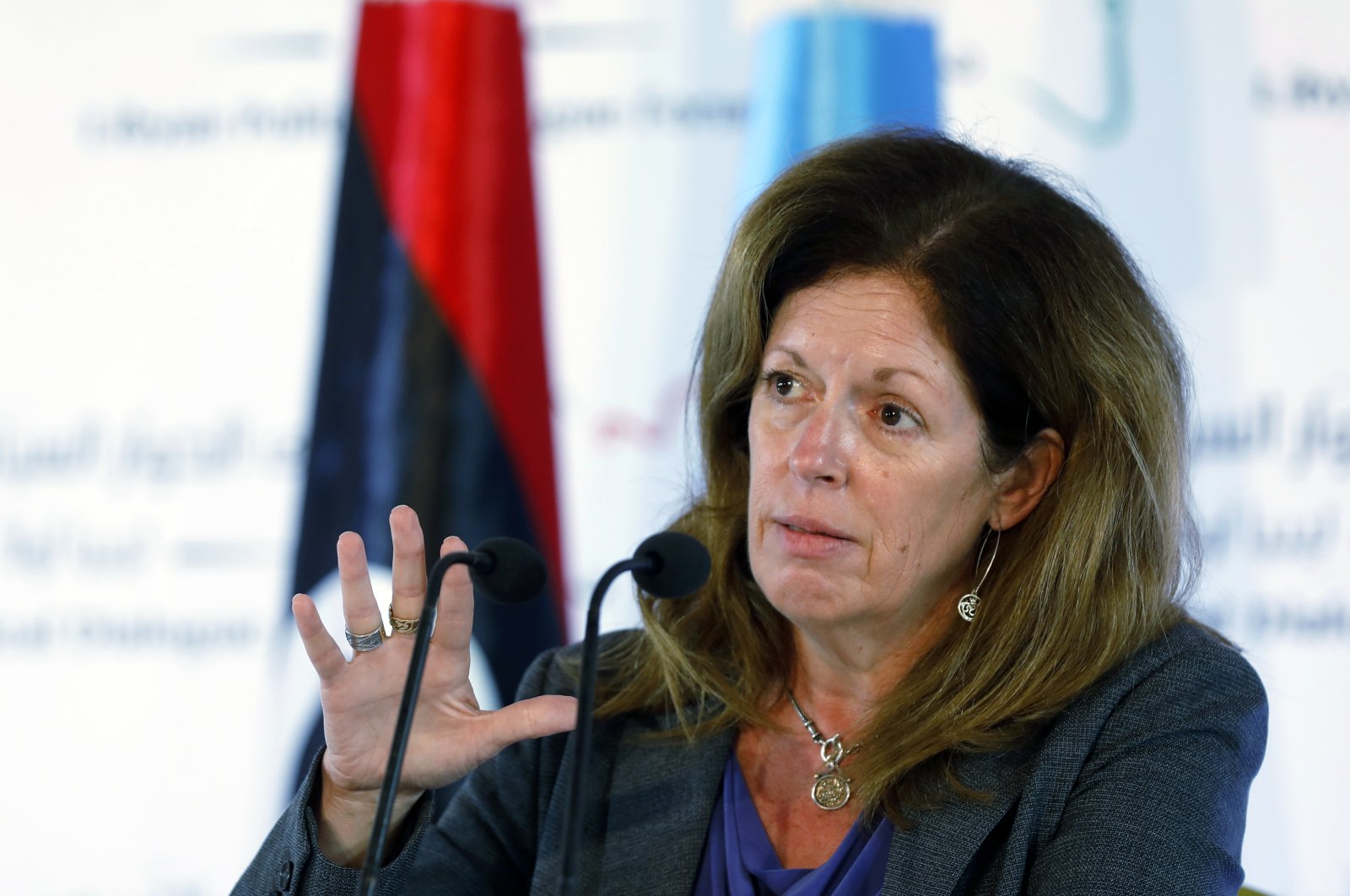 Stephanie Williams, acting special representative of the secretary-general and head of the United Nations Support Mission in Libya, speaks during a news conference in Tunis, Tunisia, Nov. 15, 2020. (AP Photo)
by DAILY SABAH WITH AGENCIES Feb 05, 2021 1:10 pm

The United Nations Security Council has approved a cease-fire monitoring mission in Libya while the delegates from Libya’s opposing sides continue their talks to choose an interim prime minister and a three-person presidency council in a bid to reunite the North African country before elections in December.

The Libyan Political Dialogue Forum (LPDF), including delegates ranging from regional and tribal figures to representatives of political factions, kicked off a five-day meeting Monday under U.N. mediation at an undisclosed site outside Geneva in hopes of stabilizing the oil-rich country that has been largely lawless since long time dictator Moammar Gadhafi's fall and killing in 2011.

The voting process is taking place under the mediation of the U.N. secretary-general’s acting special representative for Libya, Stephanie Williams. The interim authority to be chosen will seek to rebuild and unify state institutions and lead Libya to a national election on Dec. 24. A list of possible candidates has already been agreed upon.

"We have four lists on which you are going to decide today," Williams told delegates after they stood for the national anthem.

"They are diverse. They are representative of Libya's greatness and its potential."

The warring factions also agreed that a national referendum would be held on constitutional arrangements, laying the legal groundwork for the December vote.

The United Nations Support Mission in Libya (UNSMIL) announced Friday that it has received four lists of candidates for the positions and was “encouraged by the robust participation in this process and the diversity represented in the composition of the lists.”

The 75-member forum represents the three main regions of old Libya: Tripolitania in the west, Cyrenaica in the east, and Fezzan in the southwest – each to be represented on the three-member presidential council.

"Last but not least, they will commit to appointing not less than 30 percent women in senior leadership positions in the new government," said Williams.

Candidates running for the presidential council posts include Aguila Saleh, speaker of the east-based House of Representatives and head of the Tripoli-based High Council of State Khalid al-Mishri.

Among the candidates for the position of prime minister is Fathi Bashagha, the powerful interior minister in Tripoli. Bashagha, a front-runner, said the transitional government should be a national unity one that brings all Libyans together without discrimination.

“My candidacy for Prime Minister position stems from the experience I gained while being Minister of Interior which showed me that there is a possibility of rebuilding state institutions using unused national personnel,” he tweeted Wednesday, adding that he envisions a government based on “national partnership and competency that ensures geographical balance.”

Given the sheer number of candidates and the high bar needed to declare a winner, the U.N. mission is likely to resort to lists formed from Libya’s three regions, with each list consisting of three names nominated for the presidential council and one for the prime minister position.

In an internal document seen by Deutsche Presse-Agentur (dpa), the U.N. Security Council called on U.N. Secretary-General Antonio Guterres to establish and swiftly deploy an advance team to Libya.

The U.N. mission would monitor the departure of foreign forces from Libya, ensuring that the terms of the October agreement are met and initially focus on an area spanning several hundred kilometers around the coastal city of Sirte. This area would later be extended.

There will also be a particular focus on the key coastal road around Sirte, connecting the country’s west and east. The city is of strategic importance as it lies between the two warring sides' centers of power. It was controlled by an offshoot of Daesh in 2016.

Now, joint police forces are to be deployed, replacing militias and mercenaries, and traps and mines are to be removed.

The cease-fire deal inked in October included the departure of foreign forces and mercenaries from Libya within three months, but so far no progress has been made in that regard as mercenaries remain in Libya despite the deadline passing.

Foreign mercenaries and arms have poured into the country since putschist Gen. Khalifa Haftar launched his offensive, with Russia and the United Arab Emirates (UAE) serving as the warlord’s top suppliers. According to the U.N., there are currently 20,000 foreign forces and/or mercenaries left in Libya.

Most of the foreign forces are concentrated around the Jufra air base, held by Haftar's forces 500 kilometers (300 miles) south of Tripoli, and further west in Al-Watiya.

Local sources told Anadolu Agency (AA) on Friday that Russia transferred around 310 mercenaries from regions controlled by the Bashar Assad regime in Syria to fight alongside the ranks of Haftar’s forces in Libya.

Saying that Russia started to employ Syrian mercenaries for Haftar two months ago despite the ongoing peace process in Libya, local sources indicated that the Syrians would receive $1,000-$1,500 monthly.

After receiving their initial training in Syria, the mercenaries were sent to Libya on Thursday from Hemeimeem airbase in western Syria's Latakia on a military cargo plane.

Another large group of mercenaries is the Sudanese fighters, for whom the Libyan civil war has become a source of income as an alternative to working amid difficult conditions in goldmines and an escape from refugee camps.

Sudan, which shares a 330-kilometer (200-mile) border with southeastern Libya, is undergoing a fragile democratic transition after massive protests in 2019 pushed the military to topple former President Omar al-Bashir. The Darfur region remains scarred by war after a rebellion in the early 2000s against al-Bashir was brutally suppressed.

A U.N. report on Sudan released in January 2019 documented that many Arabs from the war-weary region of Darfur were fighting as "individual mercenaries" alongside warring Libyan parties.

According to the Sudan report by U.N. experts, seen by AA, Sudanese armed groups have started meeting their arms and financial needs from Libya and have significantly increased their military capacity by gathering a large number of fighters as well as new equipment.

The largest Sudanese militia groups are fighting alongside Haftar.

The report said that fighters under Haftar receive monthly $1,500 monthly, while middlemen receive $3,000 for every new fighter they recruit.

The UAE was also frequently reported to have a role in sending Sudanese mercenaries to war-torn Libya. Human Rights Watch (HRW) in November 2020 stated that around 270 Sudanese workers were lured by the promise of employment in the UAE as security guards and were brought to Libya to fight alongside Haftar instead.

While expecting to work as security guards in the air-conditioned skyscrapers or cavernous malls of Abu Dhabi, the Sudanese men were hired by Black Shield Security Services, an Emirati security services company, and a short time later, their passports and phones were confiscated.