US, NATO have strong interest in keeping Turkey close: Blinken 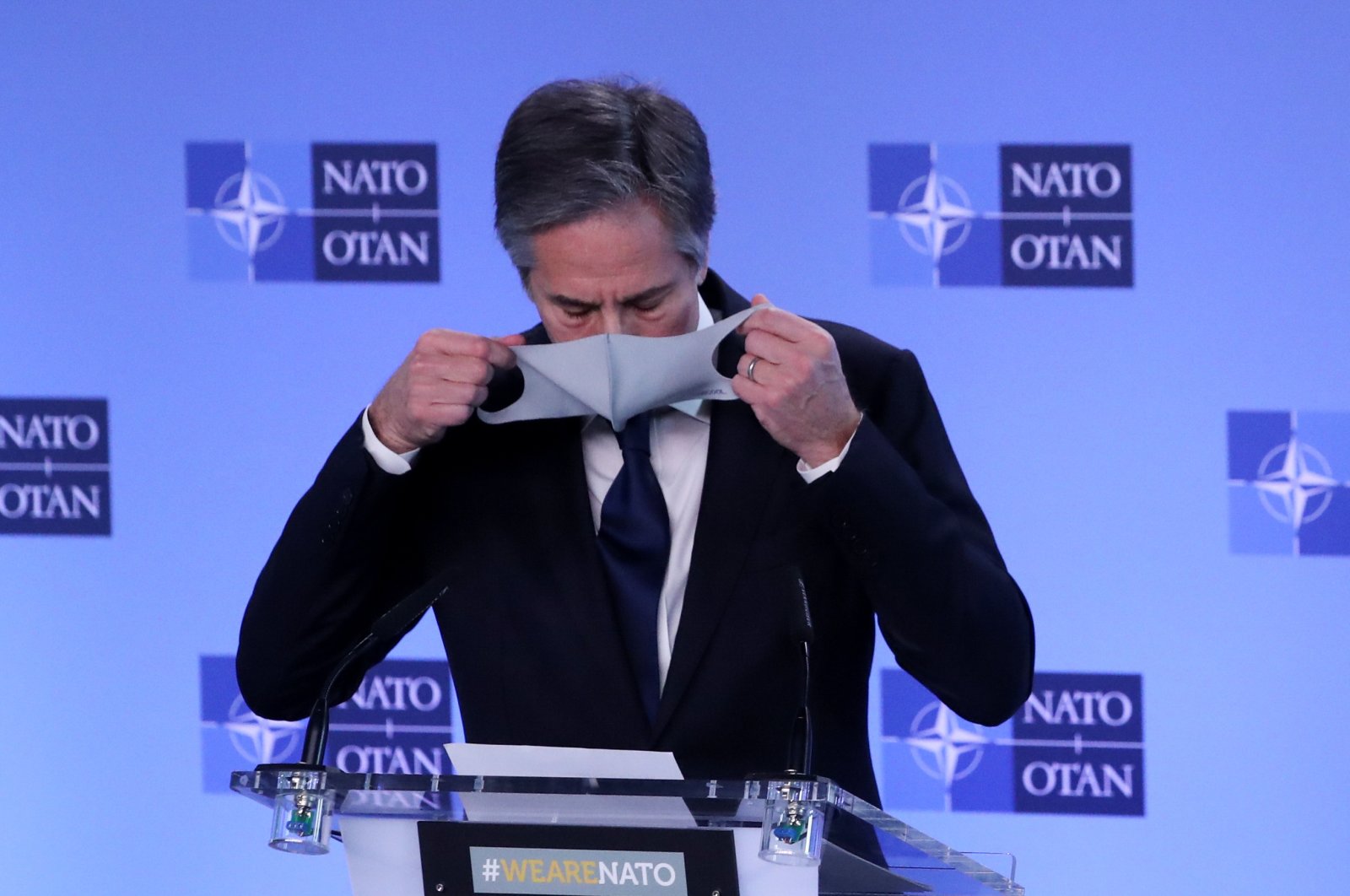 U.S. Secretary of State Antony Blinken puts on his protective mask during a news conference at a NATO Foreign Ministers' meeting at the alliance's headquarters in Brussels, Belgium, March 23, 2021. (REUTERS Photo)
by DAILY SABAH
Mar 23, 2021 12:36 pm

The NATO alliance could emerge stronger after a period of internal divisions and must keep Turkey at the heart of trans-Atlantic ties, U.S. Secretary of State Antony Blinken said on Tuesday.

Blinken said that, despite public differences with Ankara, the United States and NATO had a strong interest in keeping Turkey anchored in the alliance.

America's top diplomat adopted a positive tone at the start of a two-day meeting of alliance foreign ministers as he looks to rebuild ties strained by former U.S. President Donald Trump.

Diplomatic sources told Daily Sabah that Foreign Minister Mevlüt Çavuşoğlu and Blinken are expected to meet on the sidelines of the NATO meeting and discuss bilateral ties.

The two top diplomats had their first phone call under the new Joe Biden administration last month. Congratulating Blinken for his new position as the secretary of the state, Çavuşoğlu said that Turkey is willing to have a dialogue based on mutual respect with the new U.S. administration.

Issues, including Syria, the S-400 missiles and the extradition of Fetullah Gülen – the mastermind of the July 15 coup attempt orchestrated by the Gülenist Terror Group (FETÖ) – as well as U.S. support for a terrorist organization threatening Turkey’s security have led to mounting tensions between the two partners.

Speaking on the issue at the NATO summit, Blinken pledged to share Washington's "initial thinking" on a looming Afghanistan withdrawal deadline.

High on the agenda for NATO is the future of the alliance's 9,600-strong mission in Afghanistan after Trump struck a deal with the Taliban to withdraw troops by May 1.

"We have a review underway in the United States. I'm here today in part to share some of our initial thinking with our NATO allies," Blinken said in opening remarks with alliance chief Jens Stoltenberg.

Biden said last week that it would be "tough" for Washington to meet the looming deadline.

That prompted outrage from the Taliban, who warned that the U.S. would be "responsible for the consequences."

Ankara recently stated that Turkey will continue to support Afghan security. Turkey has been contributing to the security of Afghanistan and will keep its presence in the country as long as its Afghan brothers demand it, Çavuşoğlu said earlier this month, marking the 100th anniversary of diplomatic relations between the two countries.

The Turkish Parliament in late 2020 approved a motion to extend the deployment of Turkish troops in Afghanistan for 18 months as part of NATO's support mission in the war-torn country. The initial legislation took effect on Jan. 6, 2019, that allowed the Turkish government to send troops to Afghanistan to support the NATO-led mission Resolute Support. After ending the 17-year combat mission in Afghanistan in 2018, the mission has evolved into training and advising the nascent Afghan security forces.

Around 12,000 foreign troops from 28 NATO allies and 14 other partner nations agreed to support the NATO mission in Afghanistan. The legislation that was first passed in 2015 also grants the government authority to permit foreign army personnel to be transported to and from Afghanistan through Turkey.

Stoltenberg also touched upon relations with Turkey, acknowledging the difference in opinion regarding the S-400s issue and the Eastern Mediterranean conflict, but noted that NATO provides a significant platform to discuss and solve problems.