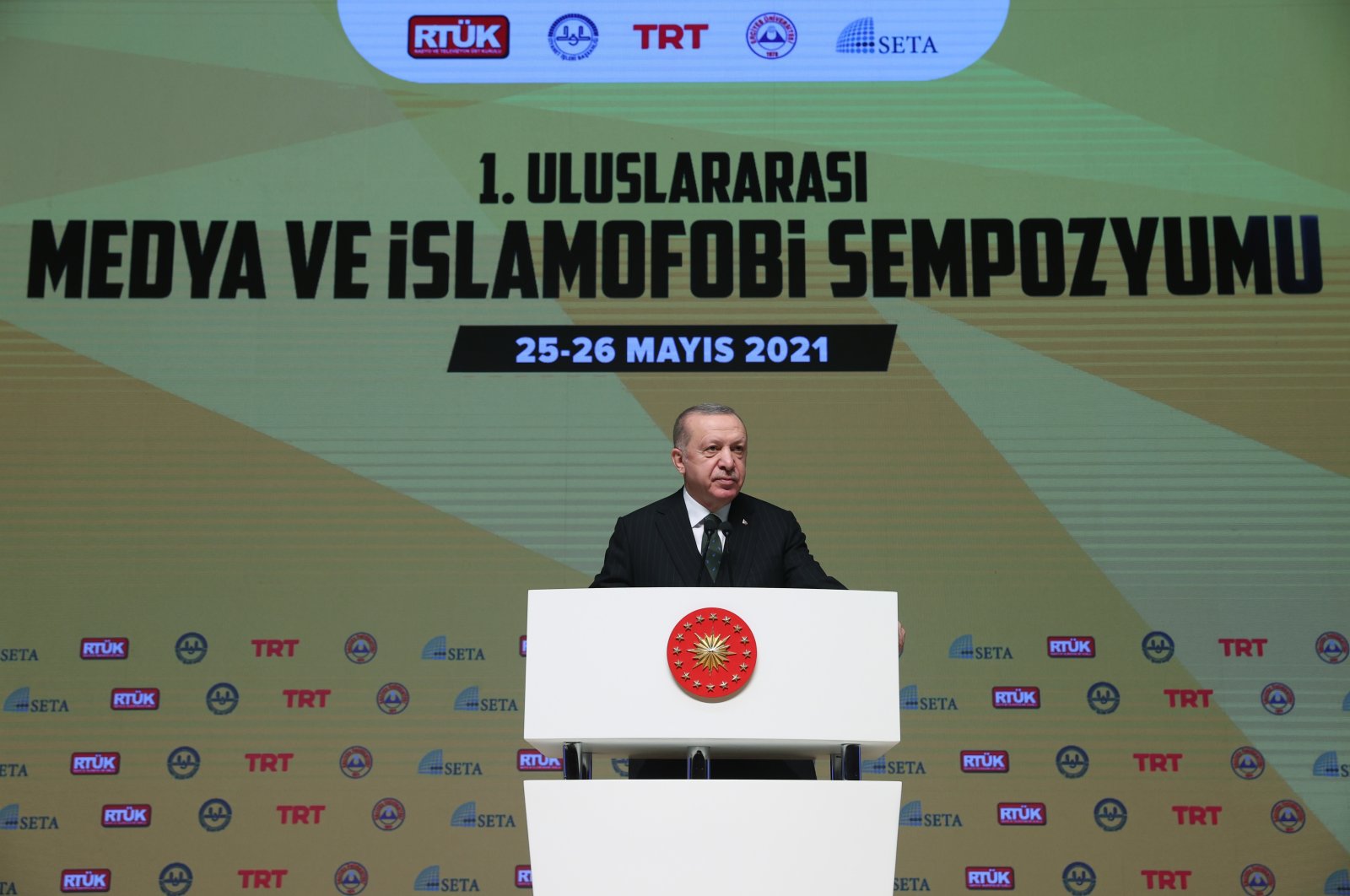 President Recep Tayyip Erdoğan speaks at the International Symposium on Media and Islamophobia in the capital Ankara, Turkey, May 25, 2021. (AA Photo)
by daily sabah May 25, 2021 2:25 pm
RECOMMENDED

President Recep Tayyip Erdoğan Tuesday warned against the rise of Islamophobia and anti-Muslim sentiment in Western countries as he said states are now openly embracing far-right and Islamophobic political movements and anti-Muslim policies.

Speaking at the International Symposium on Media and Islamophobia in the capital Ankara, Erdoğan stated that Islamophobia has become a serious concern as Western states fail to take action against it.

"Islamophobia and anti-Muslim sentiment have been spreading like cancer cells in many parts of the globe, primarily in the West," the president said, adding that far-right groups once considered radical and marginal have now become mainstream political movements in western countries.

"Instead of discussing the dimensions of the Western threat, those who fall under the influence of racist and discriminatory trends take the easy way out," he underlined.

Racist attacks targeting Muslims or immigrants increasingly make the headlines as white supremacists become more efficient in an age where their ideals, or at least parts of them, are going mainstream. There is no single large group orchestrating these attacks against Muslims and immigrants. Rather, individual attacks lead to more copycat attacks. The tolerant political climate under the pretext of freedom of speech has helped far-right sympathizers with violent tendencies expand their support.

Erdoğan said that those who once targeted the Jewish community now have turned Muslims into the main target.

"We clearly know that this new racism against Muslims is actually a hostility against Islam despite the efforts by Western societies to soften it by calling 'Islamophobia,'" he said.

"The U.S. administration’s strategy to demonize Muslims post-9/11 has served as a means to further trigger anti-Muslim sentiment that already existed in the cultural structure of many Western societies," he also underlined.

Erdoğan continued by urging all countries and societies to join forces and establish a strong communication network against the rising threat.

"Efforts to prevent Islamophobia, which play an important role in peace and security of the whole of humanity, should be carried out through common sense mechanisms that should be set up."

“We need to mobilize all politicians, intellectuals and media workers with a conscience and our own religious officials against the threat of Islamophobia,” Erdoğan said.

He noted that efforts against Islamophobia need to be conducted by joint mechanisms to ensure peace and security for all.

Turkish officials, including Erdoğan, have frequently urged European decision-makers and politicians to take a stance against racism and other types of discrimination that have threatened the lives of millions of people living within the bloc’s borders.

Every other day throughout the course of 2019, a mosque, an Islamic institution or a religious representative in Germany was targeted in anti-Muslim attacks. More than 90% of these were attributed to politically motivated crimes by the far-right. Germany is home to 81 million people and the second-largest Muslim population in Western Europe after France. Of the country’s nearly 4.7 million Muslims, at least 3 million are of Turkish descent.

Islamophobia is being disguised as secularism in France, a French opposition leader had said in criticism of the Emmanuel Macron-led government, which has recently come under fire for policies against French Muslims and just passed an anti-hijab bill.

Under the pretext of the "Islamization" of the countries they live in, racist terrorists switched from attacks on mosques to mass killings. Anders Behring Breivik, who slaughtered 77 people in July 2011 in Norway, is viewed as an inspiration for more attacks that followed. Four years later, Anton Lundin Pettersson, harboring similar views as Breivik, killed four students with immigrant backgrounds in Sweden. In 2016, 10 people were killed in Germany's Munich in another racist act of terrorism. On Feb. 19, 2020, in the German town Hanau, Tobias Rathjen, a terrorist harboring racist views, gunned down nine people of immigrant backgrounds, including five Turkish nationals, before killing himself.

The Hanau attack ignited the debate over the seriousness of far-right terrorist threats often ignored by authorities. It was one of the worst acts of terrorism with racist motives in recent memory.

The two-day symposium is taking place at the ATO Congresium, an international convention and exhibition center in Ankara. The symposium is being organized by the Radio and Television Supreme Council (RTÜK), the Presidency of Religious Affairs, Erciyes University, Turkish Radio and Television Corporation (TRT) and the Ankara-based policy think-tank Political and Economic and Social Research Foundation (SETA).