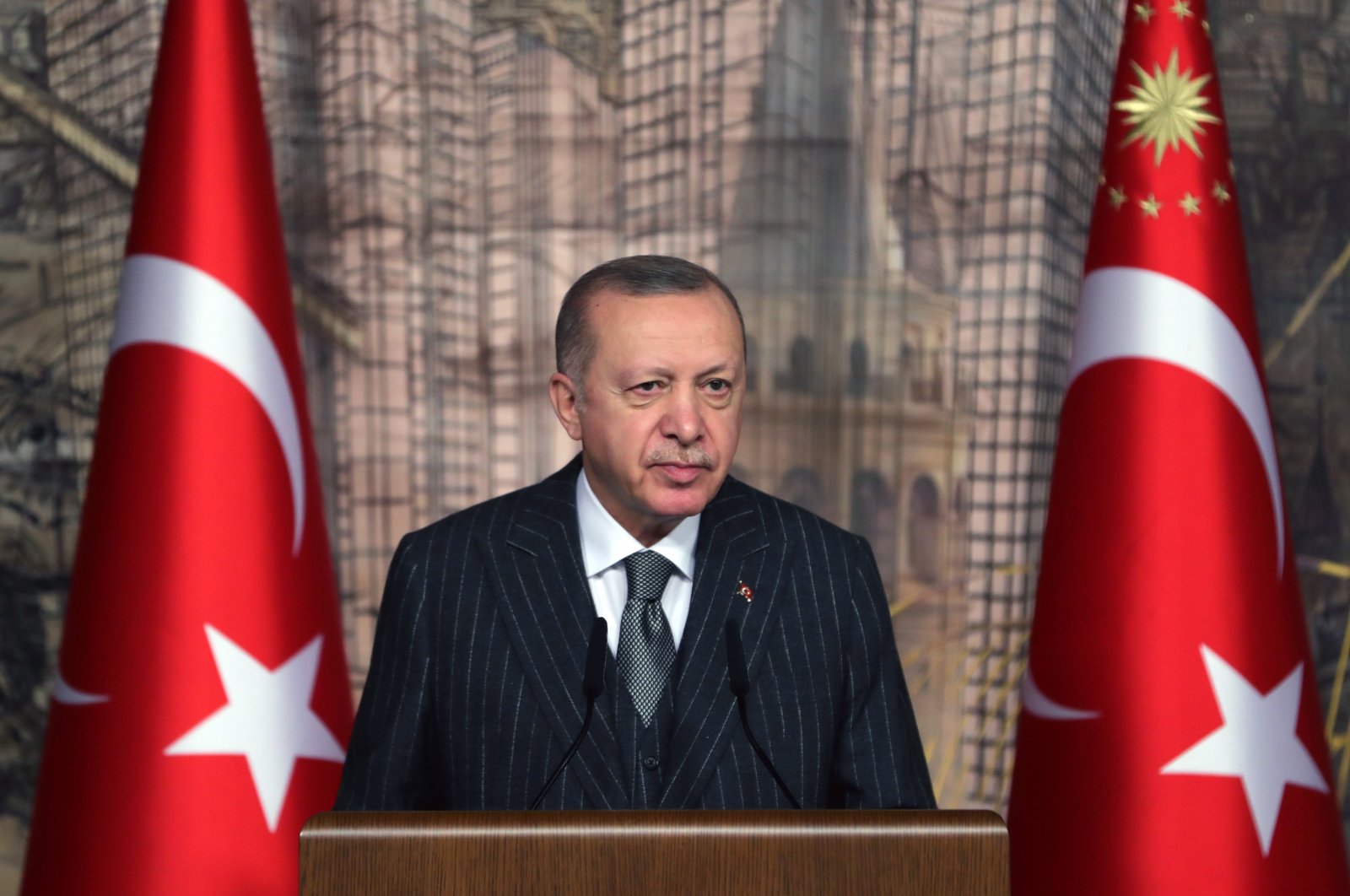 President Recep Tayyip Erdoğan speaks in a meeting with the women's branch of the Union of International Democrats (UID) in Istanbul, Turkey, April 11, 2021. (AA)
by DAILY SABAH Apr 11, 2021 2:32 pm
RECOMMENDED

Islamophobia has turned into one of the instruments used by Western politicians to cover up their failures, President Recep Tayyip Erdoğan said Sunday.

Speaking at a meeting with the women's branch of the Union of International Democrats (UID), a Turkish nongovernmental organization (NGO), in Istanbul, Erdoğan said: "Politicians who fail in foreign policy, get stuck inside and put their personal rivalries before their offices, try to camouflage their inadequacy by attacking myself and Muslims."

Racist attacks targeting Muslims or immigrants increasingly make the headlines as white supremacists become more efficient in an age where their ideals, or at least parts of them, are going mainstream. There is no single large group orchestrating these attacks against Muslims and immigrants. Rather, individual attacks lead to more copycat attacks.

Every other day throughout the course of 2019, a mosque, an Islamic institution, or a religious representative in Germany was targeted in anti-Muslim attacks. More than 90% of these were attributed to politically motivated crimes by the far-right. Germany is home to 81 million people and the second-largest Muslim population in Western Europe after France. Of the country’s nearly 4.7 million Muslims, at least 3 million are of Turkish descent.

Islamophobia is being disguised as secularism in France, a French opposition leader had said in criticism of the Emmanuel Macron-led government, which has recently come under fire for policies against French Muslims and just passed an anti-hijab bill.

Under the pretext of the "Islamization" of the countries they live in, racist terrorists switched from attacks on mosques to mass killings. Anders Behring Breivik, who slaughtered 77 people in July 2011 in Norway, is viewed as an inspiration for more attacks that followed. Four years later, Anton Lundin Pettersson, harboring similar views as Breivik, killed four students with immigrant backgrounds in Sweden. In 2016, 10 people were killed in Germany's Munich in another racist act of terrorism. On Feb. 19, 2020, in the German town Hanau, Tobias Rathjen, a terrorist harboring racist views, gunned down nine people of immigrant backgrounds, including five Turkish nationals, before killing himself. The Hanau attack ignited the debate over the seriousness of far-right terrorist threats often ignored by authorities. It was one of the worst acts of terrorism with racist motives in recent memory.

"Those who are still trying to squeeze the European Turks into the narrow patterns of the 1960s do not want to accept the reality of a growing and strengthening diaspora," the president continued and gave the example of Uğur Şahin and Özlem Tureci to point at how the times have changed.

"The success achieved by our teachers Uğur Şahin and Özlem Türeci in developing the COVID-19 vaccine has clearly shown what our people can do if they are supported and given the opportunity," he said.

Europe, a continent that quickly turned into the epicenter of the pandemic, is scraping through the crisis, as each country fends for itself while the European Union fails to come up with a collective response. Still, the Turkish diaspora on the continent holds onto its determination to overcome the coronavirus outbreak and are making do with what European states have to offer. Longing for their homeland, however, breeds discouragement.

Erdoğan also criticized the main opposition Republican People's Party (CHP) for siding with the West whenever it got the chance.

"We get upset when we see those who come upon us by waving the sword of the infidel in order to oppose us," he said.

"Turkey's record and the last 19 years of success, we hit our mark with our women and our young people," Erdoğan continued.

As far as the fight against the coronavirus is concerned, the president underlined: "We will hopefully overcome this disease together by following the rules of cleaning, masks and (social) distancing."

"With Allah's permission and blessing Turkey will be stronger than the process of this pandemic," he further added regarding the upcoming period.

“We will continue our fight against the pandemic, taking precautions regardless of the criticism of the ones who see the nation’s distress as a door to political favor.”

A total of 52,676 cases, including 2,497 symptomatic patients, were confirmed across the country, according to the data released by the Ministry of Health on Saturday. A decrease from Friday's nearly 56,000 cases was due to the reduced mobility thanks to weekend curfews in effect in almost all provinces. Turkey's overall case tally is over 3.79 million, while the nationwide death toll has reached 33,702, with 248 fatalities over the past day. As many as 32,539 more patients in the country won the battle against the virus, bringing the total number of recoveries to over 3.3 million. More than 41.2 million coronavirus tests have been done in Turkey to date, with 302,735 done since Friday.

Since the beginning of the crisis, Erdoğan highlighted, more than 100,000 of Turkish citizens have been brought to Turkey from 142 countries.

Turkey offered free air ambulance services for its citizens across the globe during the pandemic. In April 2020, Emrullah Gülüşken, another COVID-19 patient, was airlifted to Turkey from Sweden where his family claimed he was unable to receive treatment. Turkey also initiated a mass evacuation for citizens stranded abroad. The country also regularly dispatches air ambulances to other countries to transfer coronavirus patients who wish to be treated in Turkey.

“Yesterday we met with the president of Ukraine. We strive for Russia and Ukraine to resolve their disputes peacefully," the president also added regarding the recent developments in Ukraine.

Erdoğan on Saturday urged the parties to resolve tensions near the Ukraine-Russia border through dialogue, adding that Turkey’s primary goal is to make the Black Sea region a basin of peace.

"Tensions in eastern Ukraine can be resolved peacefully through dialogue, in line with international law and Ukraine's territorial integrity. Our primary goal is for the Black Sea region to be a basin of peace," Erdoğan told a joint press conference with Ukrainian President Volodymyr Zelenskiy.

He reiterated Turkey’s decision to not recognize the annexation of Crimea, saying that Ankara supports Ukraine's initiative of the Crimea Platform.

For his part, Zelenskiy said the views of Kyiv and Ankara coincide regarding threats in the region and responses to these threats.

The Russian military movements have fuelled concerns that Moscow is preparing to send forces into Ukraine. The Kremlin denies its troops are a threat but says they will remain as long as it sees fit.