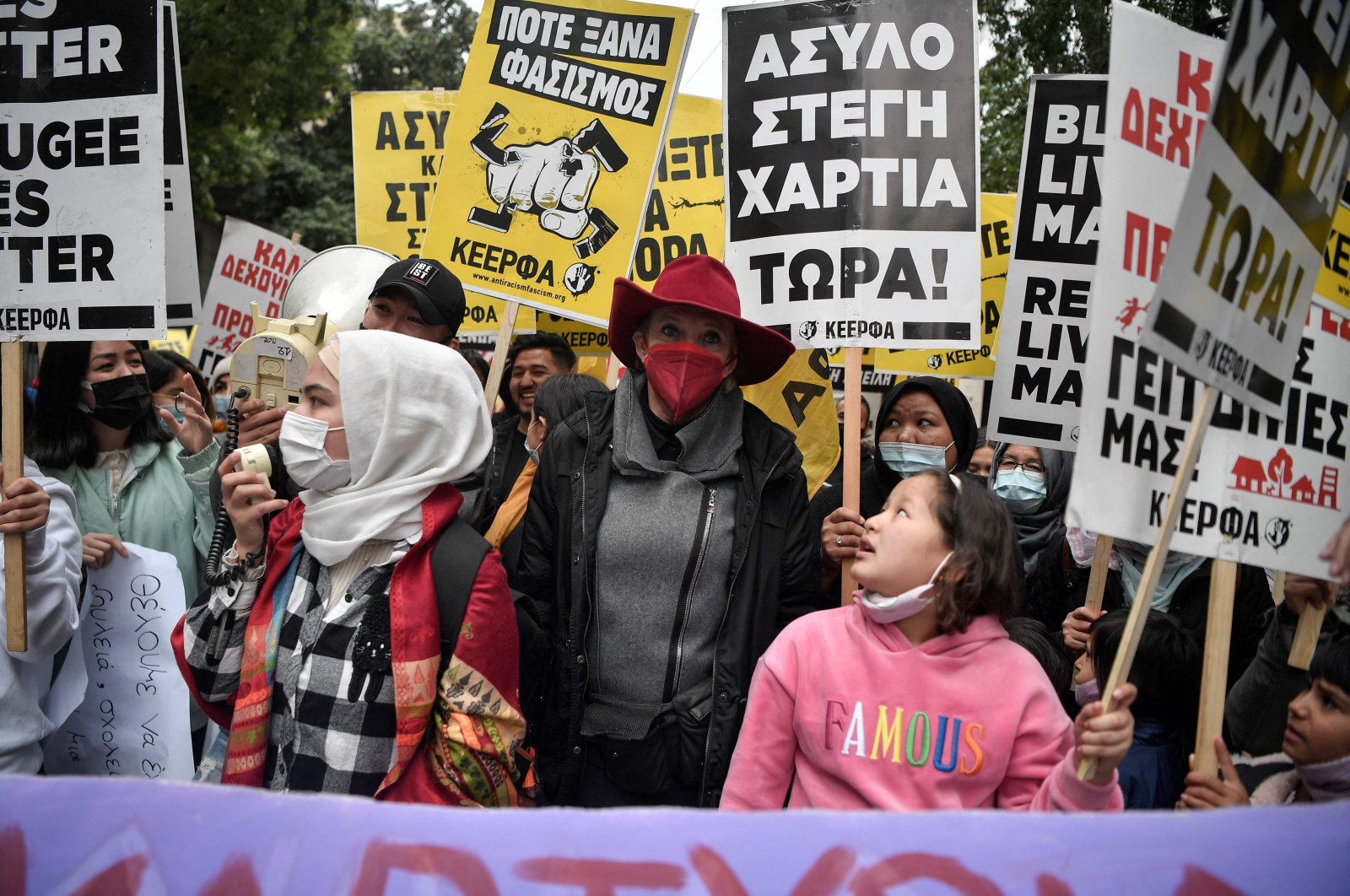 Dutch journalist Ingeborg Beugel (C), who questioned Greece’s treatment of refugees and accused it of illegal pushbacks, takes part in a rally in Athens, Greece, Nov. 17, 2021. (AFP Photo)
by Daily Sabah with AA Nov 18, 2021 9:41 am
RECOMMENDED

A Dutch journalist who earlier this month accused Greek Prime Minister Kyriakos Mitsotakis of lying about migrant pushbacks said Wednesday she plans to leave Greece out of concern for her safety after she became the target of pro-government media.

"I am being targeted and threatened by pro-government media and extreme right factions," Ingeborg Beugel told the Dutch online newspaper NU.

"Mitsotakis is not used to direct questions and responded in a very authoritarian manner. He thought he had managed to silence the press for the past two years," said Beugel.

She noted that she was even physically threatened as a result of a systematic hate campaign.

"When I was walking home along a dark street, a man threw a stone at my head. He called me a Turkish spy and told me to go to (Turkish President Recep Tayyip) Erdoğan. The stone hit my forehead, so I ran home very fast. That was a bit of a shock," she said.

Beugel noted, however, that she has also received sympathy from some Greek people who expressed support for her journalism.

Highlighting that she was not offered any kind of protection by Greek authorities against the threats, Beugel said the Dutch Journalists' Union (NJV) consulted with the Dutch Foreign Ministry regarding her safety in Greece.

Consequently, she was advised to leave Greece as soon as possible, she added.

Beugel was also briefly interviewed by Anadolu Agency (AA) at a demonstration in Athens late Wednesday to mark the 48th anniversary of the student uprising at Athens Polytechnic, which paved the way for the fall of the Greek military junta a year later.

She said she had been targeted by an intense hate campaign, affirming that the Dutch Foreign Ministry, Dutch Embassy in Athens, NJV and her children strongly advised her to leave Greece.

In a related development, Reporters Without Borders (RSF) strongly condemned the attack on Beugel and urged Greek authorities to identify the perpetrator.

Arguing that the Dutch journalist has faced a campaign on social media and in pro-government media to discredit her for her direct questioning of Mitsotakis on the pushbacks, RSF said: "It is unbearable that a journalist has to leave an EU country after verbal & physical attacks!"

On Nov. 9, Beugel confronted Mitsotakis at a press conference, accusing him of lying about migrant pushbacks.

"Why do you lie about pushing back migrants?" she asked him.

Mitsotakis rejected the allegations, saying he could not accept the "insulting of him and the Greek people."

In a report published in September, the European Union's Fundamental Rights Agency (FRA) revealed that migrants continue to be subject to difficult conditions and violations of their rights in detention and reception centers at EU borders. The report also noted that pushing migrants back to Turkey has become the de facto border policy of Greece, and that torture, ill-treatment and pushbacks continue.

According to the report of the Vienna-based FRA on fundamental rights, covering June 1-June 30, there have been cases of violent pushbacks in Croatia, the Greek Cypriot administration, France, Greece, Hungary, Malta, Romania, Serbia and Slovenia.

In the report, it was stated that children seeking asylum without an accompanying person or with their families were detained in Bulgaria, Croatia, the Greek Cypriot administration, France, Greece and Poland.