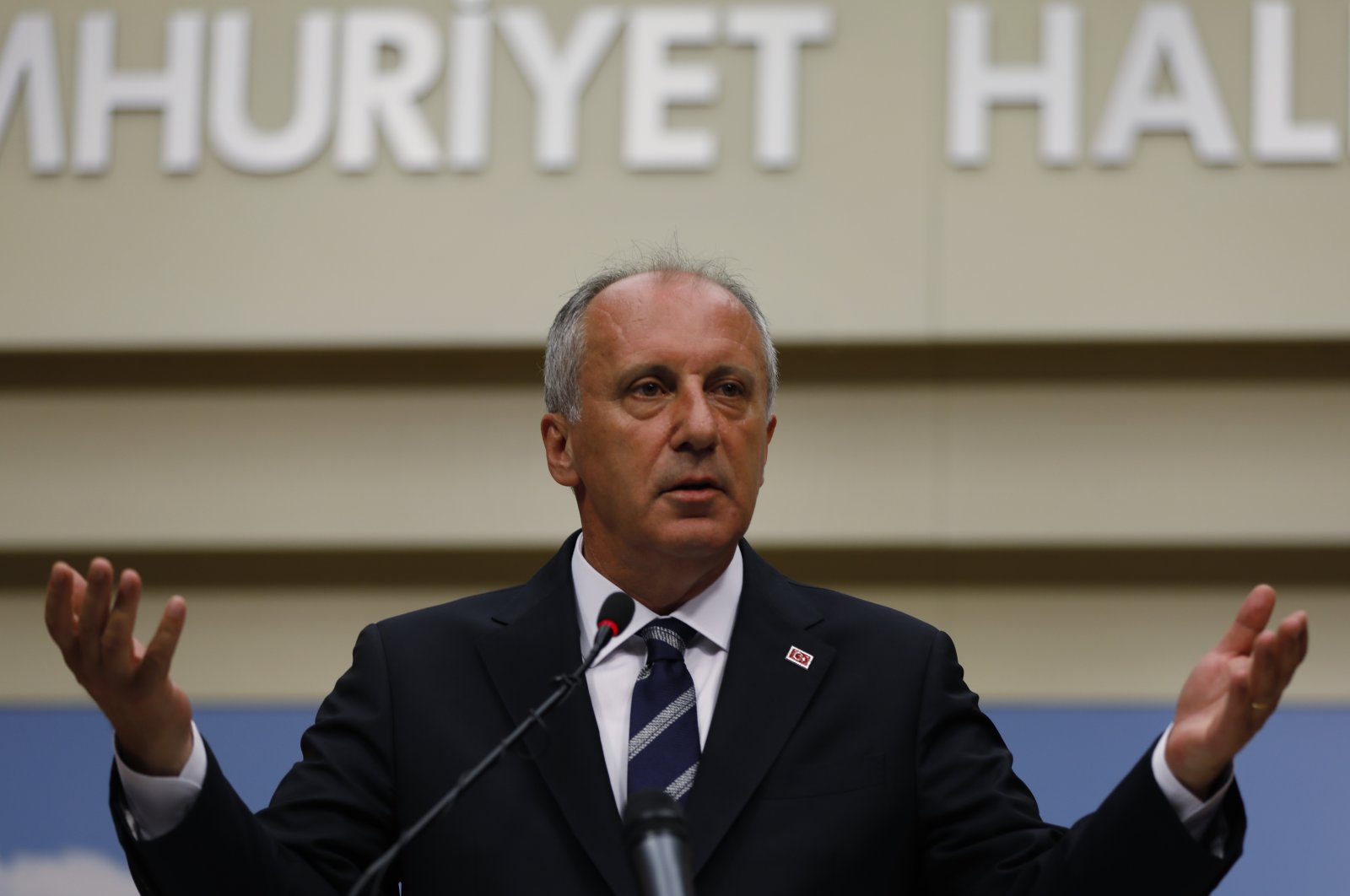 A day after the elections, Muharrem Ince, the candidate of Turkey's main opposition Republican People's Party (CHP), gestures as he speaks at a news conference in the capital Ankara, Turkey, June 25, 2018. (AP Photo)
by DAILY SABAH Jan 25, 2021 12:38 pm
RECOMMENDED

Main opposition Republican People’s Party (CHP) dissident Muharrem Ince is planning to make a “significant” announcement on March 1, which he says will be a groundbreaking development for the party and himself, he said in a recent interview, as he accused the party of moving away from the ideals of Republic of Turkey founder Mustafa Kemal Atatürk.

“Something very important will happen (on March 1),” Ince told the Independent Turkish.

Although he did not openly say it, he is expected to announce the details of his new party on that day.

“Our goal is to govern the country by obtaining 51% of the votes,” Ince said.

The dissident politician, who has been a member of the CHP for over four decades, has been touring different parts of Turkey as part of his "Homeland in A Thousand Days" campaign. He dismissed a recent claim by Hürriyet daily columnist Yalçın Bayer about renting a 4,500-square-meter (48,438-square-foot) building in the capital’s Çankaya district for his new party.

“We have several options that we’re still considering,” he said.

He noted that the COVID-19 pandemic has significantly impacted his campaign, as he was only able to visit 48 provinces, contrary to the planned 81 provinces.

“We did not want to risk ourselves, the people, or increase the burden of health care workers,” Ince said.

While Ince did not dismiss claims about convincing some CHP dissidents to join his party, he said he has not spoken with any Good Party (IP) members about it.

Referring to the main opposition party as “hopeless,” Ince said his Homeland movement will continue to work to win the elections. He noted that CHP Chairperson Kemal Kılıçdaroğlu has not spoken with him about his plans nor attempted to convince him to stay in the party.

The dissident politician also unintentionally dismissed the potential of joining the ruling Justice and Development Party (AK Party)-led People’s Alliance while responding to a question about splitting the CHP’s votes.

“Splitting the votes would happen if I were to leave the CHP to join the People’s Alliance, but we would not take such a step, and even if we did, we would have no followers,” Ince said.

He also criticized the CHP for lacking passion and vision and resorting to alliances to win elections.

“Nobody out there says, come on, we are a 100-year-old party and can win 50 + 1% of the votes by ourselves,” Ince said, adding that the CHP fails to reach its destination because it refuses to get on its way.

No hostility against CHP members

While noting that he has no personal grievances with any members, Ince claimed that the CHP is making two mistakes: One is not getting on the road, and the other is that it is deviating from the party’s ideology set by Atatürk.

“It is moving away from its principles. There are provincial chairpersons who refuse to pronounce Atatürk’s name,” Ince said.

He continued by criticizing the party for its unjust treatment of members who defend Atatürk’s principles.

Ince also claimed that the party has been carrying out a witch hunt-like purge against members who had openly supported him.

As the main opposition party’s candidate in the 2018 Turkish presidential election, Ince received just over 30% of the votes, placing him second behind the first-round winner, President Recep Tayyip Erdoğan, with 53%.

Ince was elected four consecutive times in 2002, 2007, 2011 and 2015 as a CHP deputy for his hometown, Yalova. He also served as the CHP’s parliamentary group deputy chairperson for two terms. He is not the first CHP dissident to part ways with the party. Recently in December, the former mayor of Istanbul’s Şişli district, Mustafa Sarıgül, announced the name of his new party, the Party for Change in Turkey (TDP), in an official launch ceremony held in Istanbul.