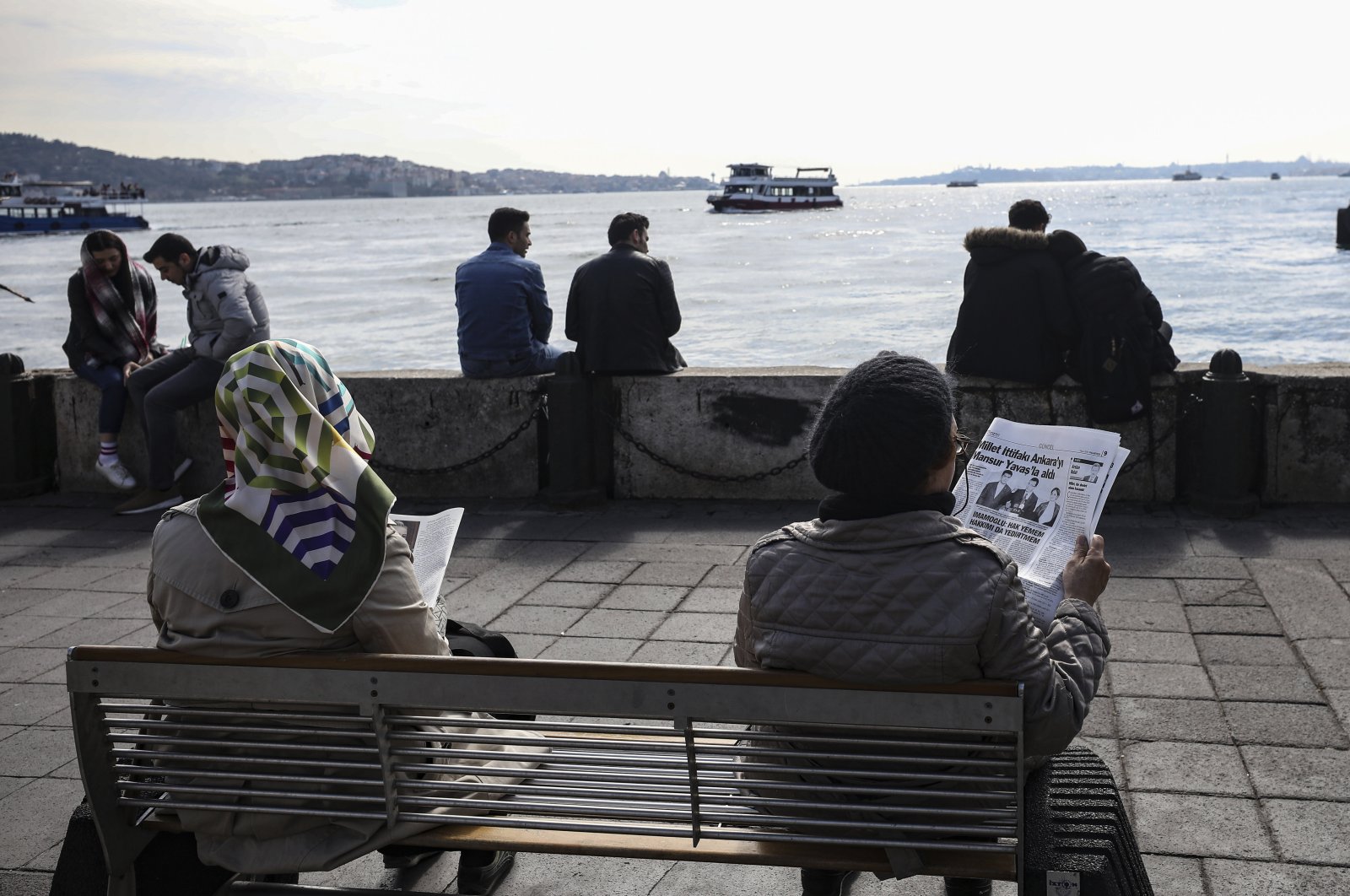 People sit reading newspapers that contain information regarding local elections a day after the vote, next to the Bosporus in Istanbul, Turkey, April 1, 2019. (AP Photo)
by DAILY SABAH Jan 28, 2021 2:00 pm
RECOMMENDED

The vote percentage of the Good Party (IP) is increasing while the popularity of the Nationalist Movement Party (MHP) and the pro-PKK Peoples' Democratic Party (HDP) is declining, a survey by MAK Consultancy revealed Thursday. The study also showed that the percentage of undecided voters passed 10%, which also happens to be the election threshold.

The survey was carried out with 2,850 people. The participants were asked which party they would vote for if there were to be parliamentary elections tomorrow. According to the results, the ruling Justice and Development Party (AK Party) would get 32.2% of the votes, followed by the opposition Republican People's Party (CHP) with 22.5%, the IP with 12.3%, the HDP with 8% and the MHP with 7.7%.

The survey revealed that newly established parties had little sway with voters, as only 2.2% of participants said they would vote for the Democracy and Progress Party (DEVA) led by former Economy Minister Ali Babacan and 2% prefered the Future Party (GP) led by former Prime Minister Ahmet Davutoğlu.

Almost half of the participants, 49%, said that they would prefer an early election, while 41% noted the next elections should be held at the designated time, in 2023.

Despite speculation by opposition parties, Turkey is expected to hold its upcoming presidential and parliamentary elections in June 2023. So far, the AK Party has consistently denied rumors of early elections.

A question about life satisfaction revealed 73% of CHP voters are not satisfied with their current living conditions, while 54% of voters who preferred the CHP’s partner, the IP, gave the same answer. The percentages stood in contrast to the People’s Alliance, as only 11% of MHP voters and 14% of AK Party voters indicated dissatisfaction.

The survey also included a question about the implications of Joe Biden’s election as the new U.S. president regarding Turkish-U.S. relations. Just under half of the respondents, 46%, said that Biden’s presidency will adversely affect bilateral relations.

Biden targeted Turkey several times while campaigning, calling on the Donald Trump administration to press Ankara on foreign policy. Also, in a video that surfaced in August, Biden said he would seek a regime change in Turkey and expressed his willingness to work with "opposition leadership" in the country to topple Erdoğan in Turkey's 2023 elections.

The participants were also asked about recent attacks on journalists and politicians. While 28% of participants said that they are worried about the incidents, 41% stated that the attacks were individual incidents and cannot be generalized.