Erdoğan accuses CHP of adopting political mentality based on lies 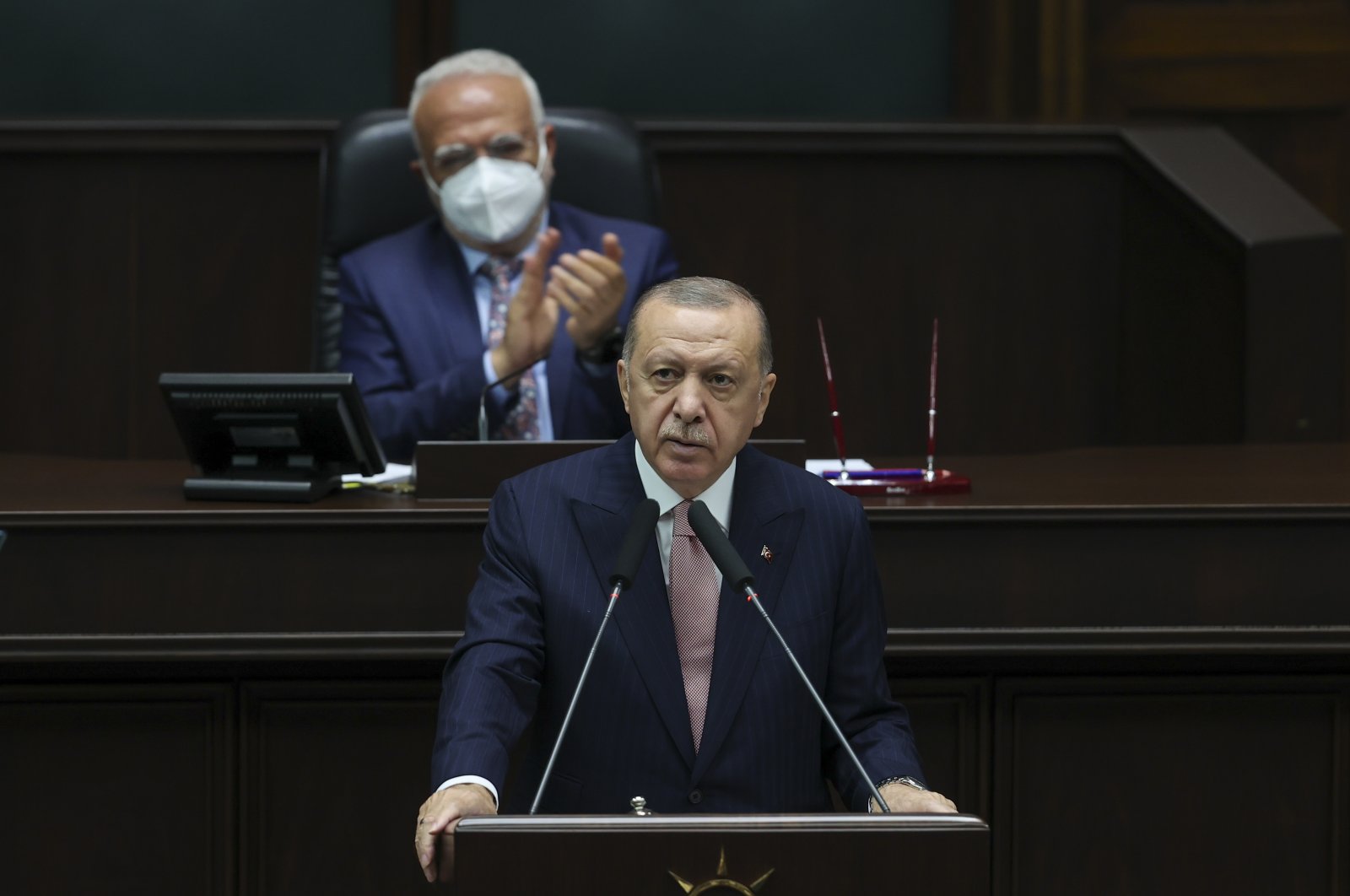 President Recep Tayyip Erdoğan on Wednesday slammed the main opposition Republican People's Party (CHP) for their opposition to the government projects and accused it of maintaining a political stance based on lies and slander.

Addressing the ruling Justice and Development Party (AK Party) group meeting in Parliament in the capital, Ankara, President and AK Party Chair Erdoğan said: "Turkey is exposed to the persecution of lies and slander by the CHP mentality. This is called the terrorism of lies."

"Just as our coasts are struggling with the risk of being without oxygen under the threat of mucilage, we are faced with a mucilage that tries to destroy every domestic and national step in politics, and moreover, pollutes politics. This political mucilage, led by the CHP, rains all kinds of slander, lies and distortions on our nation with a large media and social media network that also has a global dimension," Erdoğan said.

Noting that the main opposition falsely claimed that Qatari students will come to Turkey and study medicine without any examination or precondition due to an agreement between the two countries, Erdoğan said: "There is a mentality that can go so low that it shamelessly repeats the lie that Qatari students will enter medical school without examination, without respecting (our) 2.6 million students."

"I believe that all the youth of our country will hold (CHP head Kemal) Kılıçdaroğlu and CHP executives accountable for this disgrace," he added.

Just hours ahead of the national university entrance exam, Turkish online newspaper T24 reported, “Qatar youth will be able to study medicine in Turkey without an exam.” Referring to the news article, Kılıçdaroğlu criticized the government. Later, it was discovered that the protocol is a "student exchange program" only in the field of military health education and only for Qatari military personnel and military school students.

Releasing a statement about the situation, T24 apologized to its readers and clarified the truth. Despite expectations and protests from government officials and people, Kılıçdaroğolu did not apologize or correct his mistake. Some students who took the university entrance exam filed a TL 1 moral compensation lawsuit against Kılıçdaroğlu on the grounds that their motivation had been hindered before the exam.

Also touching upon the CHP's opposition to the Kanal Istanbul project, Erdoğan said: "Even with their statements on Kanal Istanbul, they make it clear that they do not recognize the Constitution, law or state manners, and that they have no respect for the nation."

The CHP and its leader Kılıçdaroğlu frequently state that they will cancel the project and will not fulfill the government's financial obligations to contractors, investors and companies if they come to the power in the next elections.

Erdoğan once again underlined that the government aims to complete the project within the next six years.

Championed by Erdoğan and revealed in 2011, Kanal Istanbul is one of Turkey’s most strategic megaprojects, meant to stem the rising risk posed by ships carrying dangerous goods via the Bosporus, especially oil tankers. The 45-kilometer (27.96-mile) long canal, which will be built through Istanbul’s Küçükçekmece-Sazlıdere-Durusu corridor, will connect the Black Sea north of Istanbul to the Marmara Sea in the south. It will boast a capacity of 160 vessels a day and is expected to create significant economic value by reducing transit periods and costs while at the same time providing a return through the collection of passage fees.

In his speech, Erdoğan also reiterated that the next general and presidential elections will be held in 2023 as planned, dismissing the opposition's calls for and speculations about an early election.

"June 2023 is the election calendar of Turkey. This is our decision as the People's Alliance, this is the date we announced," he said referring to the AK Party's political alliance with the Nationalist Movement Party (MHP).