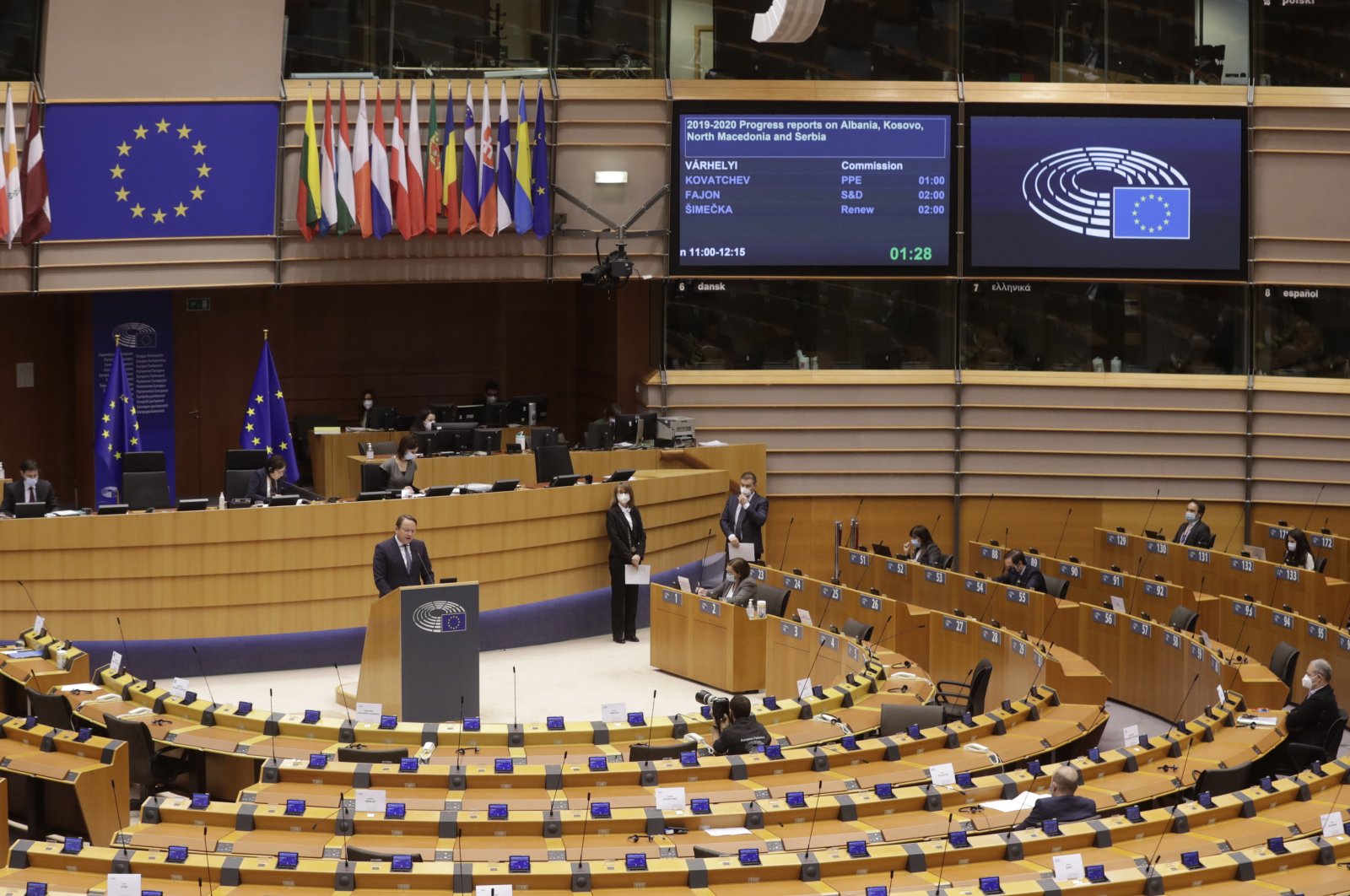 European Commissioner in charge of neighborhood and enlargement policy, Hungarian Oliver Varhelyi (C) speaks during a debate on 2019-2020 Progress reports on Albania, Kosovo, North Macedonia and Serbia during a mini plenary session at the European Parliament in Brussels, Belgium, 25 March 2021. (EPA Photo)
by DAILY SABAH Mar 25, 2021 11:42 am

EU leaders convened in a video summit where Turkey was one of the focal areas of discussion, as Brussels seeks to turn a new page with Ankara after a tumultuous 2020

European Union leaders will on Thursday consider diplomatic and economic incentives to encourage its strategic southeastern neighbor Turkey to continue improving ties with the EU as tensions in the Eastern Mediterranean have been on the decline as of late.

Merkel called for closer cooperation between the EU and Turkey, underlining Ankara's strategic importance for regional stability and its key role in addressing the refugee crisis.

Addressing lawmakers in parliament ahead of a key summit of European leaders via videoconference, Merkel said they would have extensive discussions at the summit on future ties between the EU and Turkey.

"Turkey is not just a NATO partner and an ally, it's our close neighbor, it is of strategic importance to us, as being the second-most populous country in the external borders of the European Union," she said.

"In the last meeting of the European Council we agreed that if Turkey contributes to de-escalation, we would offer further options to enhance our cooperation. Now, we will discuss how we can continue down this path," she said.

"Our discussions won't be easy, but I hope that we would reach an outcome," she added.

"There are areas where we share common interests. The important challenge of migration is of course one of these. We can solve this problem only together with Turkey," she said.

Relations with Ankara are on the table at a video summit of the 27 EU nations as the bloc plots a way forward after an alarming spike in tensions last year over gas exploration rights and maritime borders in the Eastern Mediterranean.

European Council President Charles Michel, who chairs the meeting, said the bloc wants to step up "engagement with Turkey in a phased, conditional and reversible manner."

The EU is trying to build on recent conciliatory moves from Turkey. Brussels has been encouraged by the resumption of talks with Greece over a disputed maritime border and by plans to restart U.N. peace efforts for the divided island of Cyprus. The U.N. is hosting informal talks April 27-29 in Geneva between the rival Greek and Turkish Cypriot sides as well as the island’s guarantors – Greece, Turkey and former colonial ruler Britain.

However, the EU has recently voiced concerns over Ankara's moves to shut down pro-PKK Peoples' Democratic Party (HDP) and its departure from a treaty on violence against women.

The EU "needs to work on concrete proposals for a 'positive agenda' that fosters a constructive dynamic, including in terms of regional stability," Italian Prime Minister Mario Draghi told lawmakers.

EU members are divided over the approach to Turkey, with the Greek Cypriot administration, Greece and France urging a tough line while others, led by economic powerhouse Germany, take a softer approach.

“The EU has parked sanctions in the drawer for now. But, on the flip side, the bloc might not have much to offer Turkey in the way of carrots,” said Alissa de Carbonnel at the International Crisis Group think-tank.

Turkish Foreign Minister Mevlüt Çavuşoğlu met Monday with the EU foreign policy chief in Brussels and discussed bilateral ties, regional issues and other matters, underlining that Turkey and the bloc will work together for a positive agenda.

"More cooperation is needed on updating (the) Customs Union, visa liberalization, irregular migration and (the) fight against terrorism," said Çavuşoğlu.

EU leaders at the December summit asked Borrell to report on how to advance relations with Turkey. In this context, a report presented at Monday's meeting summarized economic and political relations between Turkey and the EU in recent years.

EU leaders during a meeting in Brussels on Dec. 10 decided to draw up a list of Turkish targets to sanction over what they described as Ankara's "unilateral actions and provocations" in the Eastern Mediterranean.

Turkey has a very long history with the union and the longest negotiation process. The country signed an association agreement with the EU’s predecessor, the European Economic Community (EEC), in 1964, which is usually regarded as a first step to eventually become a candidate. Applying for official candidacy in 1987, Turkey had to wait until 1999 to be granted the status of a candidate country. For the start of the negotiations, however, Turkey had to wait for another six years, until 2005, a uniquely long process compared with other candidates.

Turkey has been putting special emphasis on the need to update the March 18 statement on migration struck with the bloc in 2016, saying that conditions have changed for refugees in five years.

In September 2015, the image of Syrian toddler Alan Kurdi's lifeless body that washed ashore in Turkey sent shock waves across the world.

Six months later, Turkish and EU leaders inked a migration pact under which Ankara was to receive political and financial benefits in return for tackling migration.

However, Brussels did not keep its promises to ease visa regulations and upgrade the Customs Union.

Shortly after the deal was struck in May 2016, arrivals of irregular migrants in the EU dropped sharply – but still remain high. Almost 860,000 irregular migrants made their way from Turkey to Greece by sea in 2015, compared to 60,000 in 2019. The numbers dropped to a record low of 9,714 people in 2020 – although this is likely related to the COVID-19 pandemic.