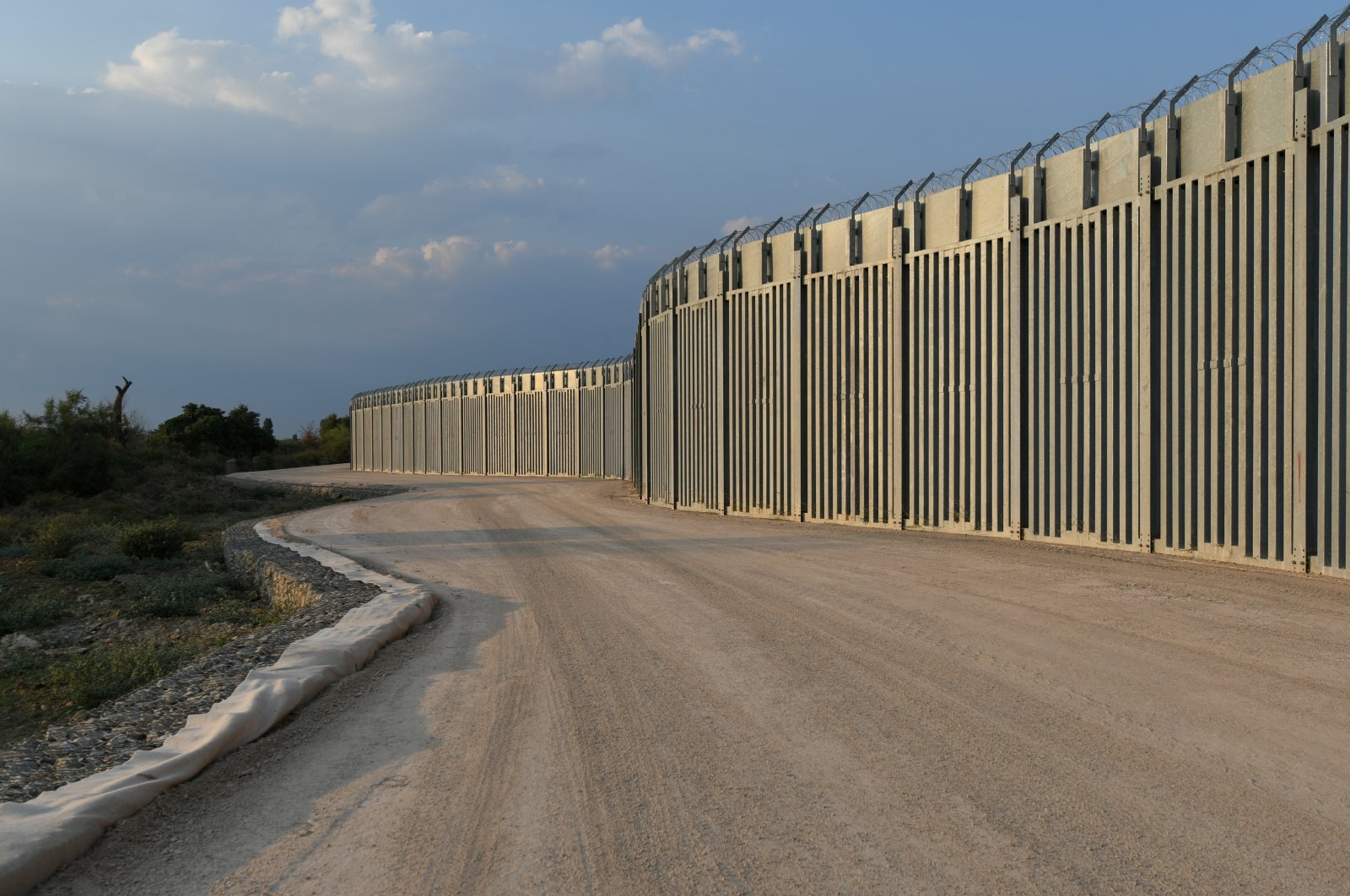 The European Union is considering providing support to Afghanistan's neighbors hosting people fleeing the new Taliban regime to prevent a new wave of migrants from heading to Europe, similar to a deal struck with Turkey in 2015.

In a closing statement following a meeting in Brussels, EU justice and home affairs ministers pledged Tuesday that the EU and its 27 nations “stand determined to act jointly to prevent the recurrence of uncontrolled large-scale illegal migration movements faced in the past, by preparing a coordinated and orderly response.”

European Commissioner for Home Affairs Ylva Johansson said there has not been a big exodus of Afghans out of the war-torn country so far but insisted there is a huge risk of a humanitarian crisis “if the Taliban turns out to be the same Taliban that we have seen in the past."

Johansson added that the EU is “quite far from recognizing the Taliban regime."

The EU said it will cooperate with the Afghan government following the Taliban’s return to power only if they respect fundamental rights and oppose terrorist groups operating on Afghan soil.

“We have not seen any answers to the important conditions that need to be fulfilled," Johansson said, adding that the EU has already frozen development aid to Afghanistan to apply pressure on the Taliban.

The meeting came the day after the last U.S. forces flew out of Kabul Hamid Karzai International Airport, ending America's longest war. Johansson said all EU staff and Afghans who worked for European institutions have now been evacuated.

The ministers called for the EU to boost its support to countries around Afghanistan “to ensure that those in need receive adequate protection, primarily in the region.”

The plan is reminiscent of the deal the EU sealed with Turkey after over 1 million migrants entered the EU in 2015, many of them fleeing conflict in Syria and Iraq. To persuade Turkey to stop people from leaving its territory, the 27-nation bloc offered the country 6 billion euros ($7.07 billion) to help Syrian refugees.

Johansson, however, said a “copy and paste" of the Turkish refugee deal would not be a good idea and that support to Afghanistan's neighbors should be tailor-made. She insisted the EU should work quickly and not “wait until people are here."

“We need to work comprehensively in the region with Afghans in Afghanistan and in the neighboring countries," she said. “The best way to prevent a migratory crisis is to prevent a humanitarian crisis."

According to the UNHCR, Iran hosts around 780,000 Afghan refugees. Moreover, it is estimated that some 2 million undocumented Afghans live in Iran.

Pakistan, on the other side, is hosting around three million Afghan refugees while authorities say there are 182,000 registered Afghan migrants in Turkey and up to an estimated 120,000 unregistered ones.

Austrian Chancellor Sebastian Kurz made clear that his country wouldn’t back a system for distributing refugees from Afghanistan across the EU. He told reporters in Berlin that Austria had already taken in a “bigger than proportionate share” of migrants since 2015.

Austria already has the fourth-largest Afghan community worldwide, he said before a meeting with German Chancellor Angela Merkel.

Merkel said, for Germany, the focus now is on how to help between 10,000 and 40,000 Afghans who are entitled to come to Germany with their close family members because they had worked for the German military or aid organizations.

“We need to see how many actually want to leave the country and how many don’t,” she said. “That will depend very much on the circumstances the Taliban create.”

Johansson plans to convene a meeting next month to discuss resettlement efforts.

The EU ministers also stressed the need to ensure that Afghanistan does not once again become a haven for terrorists.

“The EU will use all its available tools to closely monitor and respond to developments on the ground that might impact its security, in particular in the area of organized crime and terrorism,” their statement said.

Still, accommodating Afghans in countries close to their homeland will be difficult.

Rights groups were critical of the EU's focus on keeping migrants close to Afghanistan.

Amnesty International said in a letter to Johansson that the EU and its nations “must refrain from extremely damaging responses that put emphasis on keeping the EU’s border ‘protected’ and proposing or adopting measures that shift the responsibility for the protection of refugees to third countries.”

The human rights group said the EU should give Afghans who reach Europe “access to the territory and to fair and effective asylum procedures” and also consider all Afghan women and girls as “prima facie refugees” due to the risks they face in Afghanistan.

American forces helped evacuate over 120,000 U.S. citizens, foreigners and Afghans after the Taliban regained control of the country, according to the White House. Coalition forces also evacuated their citizens and Afghans. But both foreign nations and the U.S. government acknowledged they didn’t evacuate all who wanted to go.

According to some EU estimates, around 570,000 Afghans have applied for asylum in Europe since 2015.

As the EU looks for ways to prevent a new refugee wave, some member states have already taken matters into their own hands and announced reinforcements to their physical borders.

Since the massive migration movement from Syria in 2015, fortifications and barb wire have gone up along the borders of some EU countries, mostly to keep out migrants – despite the right to asylum anchored in international law. According to research conducted by Deutsche Presse-Agentur (dpa), more than half of the bloc's members have now built physical barriers to secure their territory.

With more people likely to come from Afghanistan, possibly via new routes like Belarus, many have vowed to further reinforce the existing fences and walls.

Here's an overview of the European Union's border fortifications:

In Austria, there is a fence along 4.4 kilometers (2.7 miles) of the border with Slovenia, which was built in 2015. The fence, which has been dismantled in places to allow hikers to pass, cuts through the Schengen Area, in which travel is usually allowed without border checks.

In Poland last week, works began for a barrier along the 400-kilometer-long border with Belarus to prevent irregular crossings. The fence is to span 190 kilometers, in addition to 130 kilometers already protected by barbed wire. Some 1,500 soldiers currently help protect the border, with an additional 500 to arrive as reinforcement.

The Greek government is trying to prevent migrants from crossing the EU's external border with Turkey along the Maritsa (Meriç) River by building 27 kilometers of fences at shallow areas, in addition to 11 kilometers of already existing barriers. The fences are surveilled by thermographic cameras, drones and an airship of the EU's border agency, Frontex. Barbed wire was also laid out at the border triangle with Bulgaria and Turkey to prevent people smugglers from operating, and there is a 34-kilometer-long fence along the North Macedonian border.

The Greek Cypriot administration similarly has built a fence with barbed wire cutting through the divided capital Nicosia (Lefkoşa). It is meant to keep migrants coming from Turkey to the Turkish-Cypriot north of the island and then crossing into the south, which is part of the European Union.

Moreover, the British government has invested millions in the construction of walls and fences in the port area of the French city of Calais, to prevent migrants from traveling from the EU to Britain. London and Paris recently agreed to step up border controls further.

Turkey is also taking new security measures at its borders. The beefed-up border measures in Turkey, which already hosts nearly 4 million Syrian refugees and is a staging post for many migrants trying to reach Europe, began as the Taliban started advancing in Afghanistan and took over Kabul last week.

Authorities plan to add another 64 kilometers by the end of the year to a border wall started in 2017. Ditches, wire and security patrols around the clock will cover the rest of the 560-kilometer frontier.