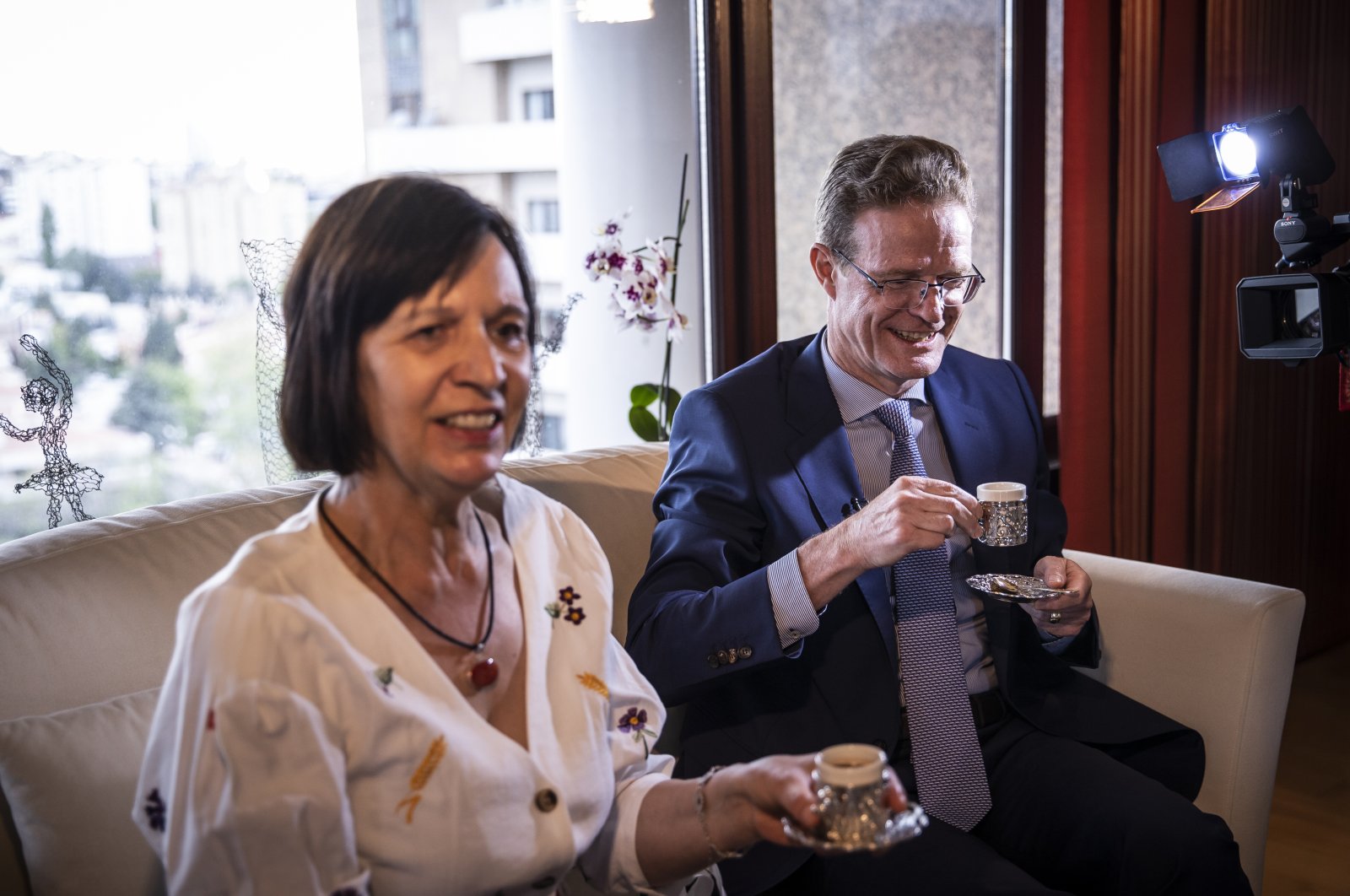 Nikolaus Meyer-Landrut, head of the EU Delegation to Turkey together with his wife, Brigitte Meyer-Landrut, are seen in Ankara, Turkey, May 7, 2021. (AA Photo)
by DAILY SABAH WITH AA May 07, 2021 2:25 pm
RECOMMENDED

Europe Day, celebrated on May 9 every year, signifies the many ties between Turkey and the European Union, Nikolaus Meyer-Landrut, head of the EU Delegation to Turkey stated.

Speaking to Anadolu Agency (AA) together with his wife Brigitte Meyer-Landrut, the ambassador talked about his impressions of Turkey since he started his duty last September.

Meyer-Landrut stated that although he had not been able to travel around Turkey as much as he had planned due to the pandemic, he had still managed to visit at least 10 provinces. He elaborated that he had the pleasure to see the different cultures and arts and crafts of various regions and was offered Turkish coffee during his visits.

The ambassador voiced regret that the mission is unable to organize big events during Europe Day as in previous years, due to the pandemic, but added that this year the day will take on another dimension.

Saying that it has been eight months since he came to Ankara, Meyer-Landrut said that he noticed that people had connections to Europe.

“I have seen that Europe has a big place in the private or working lives of people. Again with EU projects, Europe is within many people’s living and working lives from east to west and north to south.”

He continued to say that the EU projects in Turkey positively affect the lives of many people and that empowering women and promoting gender equality are significant within this scope.

Meyer-Landrut pointed out that while women around the world already had difficulties in seizing job opportunities, the situation, as well as violence against women, worsened during the pandemic, which is why the bloc puts emphasis on the Istanbul Convention.

Turkey withdrew from the convention on March 19, arguing that the pact conflicted with local traditions and that Turkish laws provide ample protection to women.

Speaking on current relations between Brussels and Ankara, Meyer-Landrut said that the desired positive agenda is encouraging.

“Topics around this positive agenda include the renewal of the customs union and related economic and trade issues. On the other side, there is also cooperation in the fields of climate problems and the COVID-19 pandemic. Besides these, there is also a need for continued cooperation on migration management and aid.”

He added that relations will be reevaluated during the June summit.

Regarding the Eastern Mediterranean conflict over drilling rights and maritime borders, the envoy said that potential for cooperation also exists in this area.

“We have a big agenda and a big potential.”