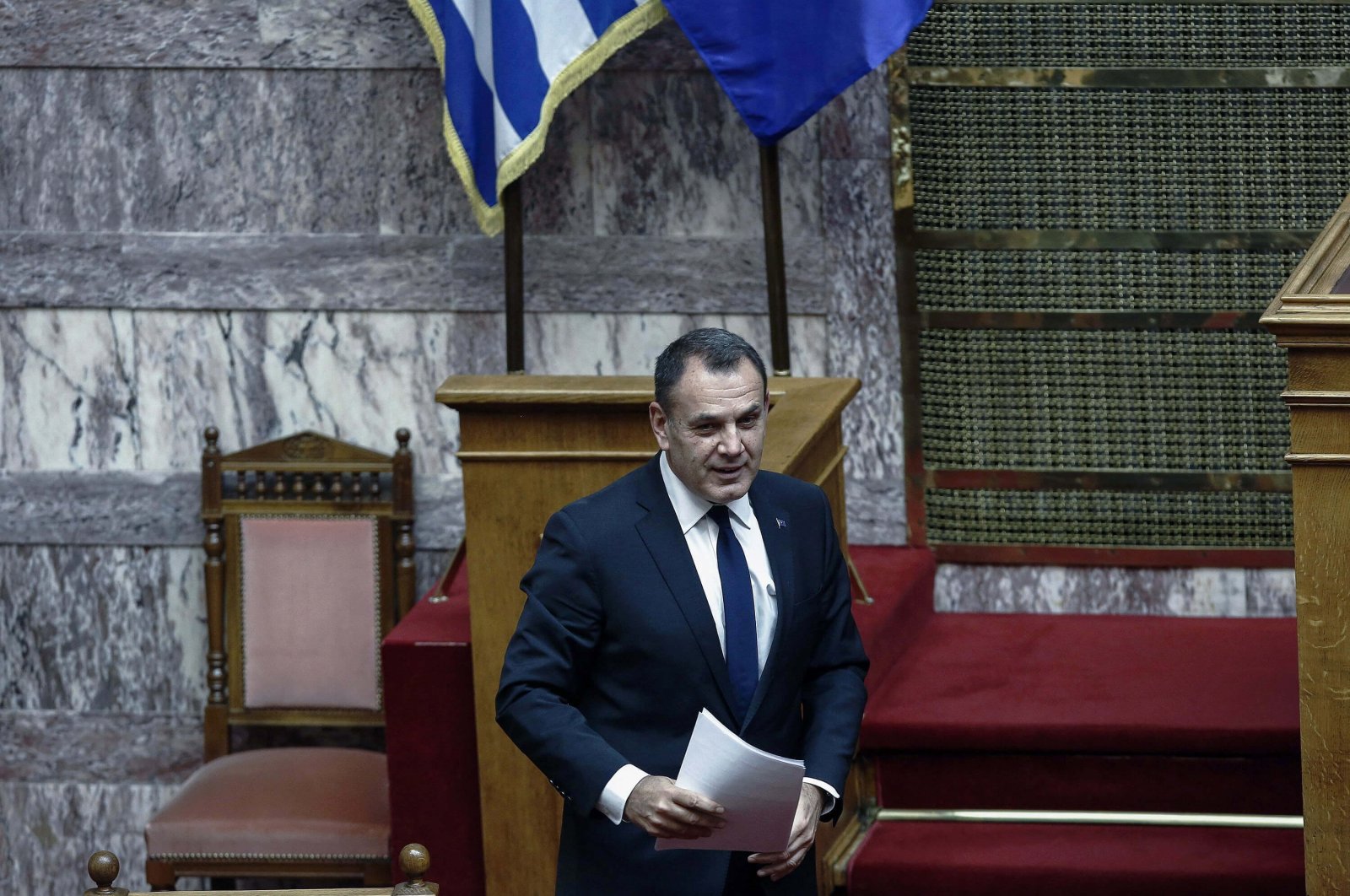 Greek Defense Minister Nikos Panagiotopoulos walks toward the podium during a Parliament session on a bill for the purchase of 18 French-made Rafale fighter jets, in Athens, Greece, Jan. 14, 2021. (EPA Photo)
by DAILY SABAH Jan 29, 2021 1:46 pm
RECOMMENDED

Defense Minister Nikos Panagiotopoulos asked his German counterpart Annegret Kramp-Karrenbauer to suspend the sale of six German-made submarines to Turkey, a Greek news outlet said Thursday, only to be rejected by the German defense authority.

The Greece-based Proto Thema newspaper said in an article that Panagiotopoulos made the request to the German minister on Wednesday during a teleconference.

According to Proto Thema, Kramp-Karrenbauer replied, “The program to build and sell in Turkey the six type-214 submarines cannot be stopped – or even delayed – because the construction company Thyssen is bound by contracts signed since 2002.”

It added that the Greek minister argued that the sale would upset the balances in the Eastern Mediterranean.

Kramp-Karrenbauer, on the other hand, asked to be informed of the Greek positions on issues raised by the Turkish side regarding the Aegean and the Eastern Mediterranean.

The official statement on the phone call by the Greek defense ministry said that Panagiotopoulos briefed his German counterpart in detail on the Greek views concerning security and stability matters in the broader region.

Speaking to Deutsche Presse-Agentur (dpa), Maas said: “I do not find the demand of an arms embargo against Turkey strategically correct. It is not easy to do this against a NATO partner. We saw that NATO ally Turkey easily bought missiles from Russia because it could not buy from the U.S.”

The German minister also expressed his hope that the disputes in the Eastern Mediterranean will be resolved through diplomatic channels.

Turkey and Greece on Monday launched the first direct exploratory talks in nearly five years to address their disputes related to sovereignty rights in the Eastern Mediterranean.

The two countries first initiated exploratory talks to discuss the issues in the Eastern Mediterranean on March 12, 2002, in an effort to find a fair, sustainable and inclusive solution. The most recent discussions are the 61st of their kind between the nations.

NATO members Turkey and Greece also participated in deconfliction talks last year, initiated by NATO Secretary-General Jens Stoltenberg. Those meetings were designed to reduce the risk of incidents in the Eastern Mediterranean. The talks facilitated the establishment of a hotline between Athens and Ankara, allowing for conflict resolution at sea or in the air.

During a meeting in Brussels on Dec. 10, EU leaders decided to draw up a list of Turkish targets to sanction over Eastern Mediterranean tensions. While France, Greece and the Greek Cypriot administration have pushed hardest for a tough line on Turkey, other EU states led by economic powerhouse Germany have been far keener on a more diplomatic approach.