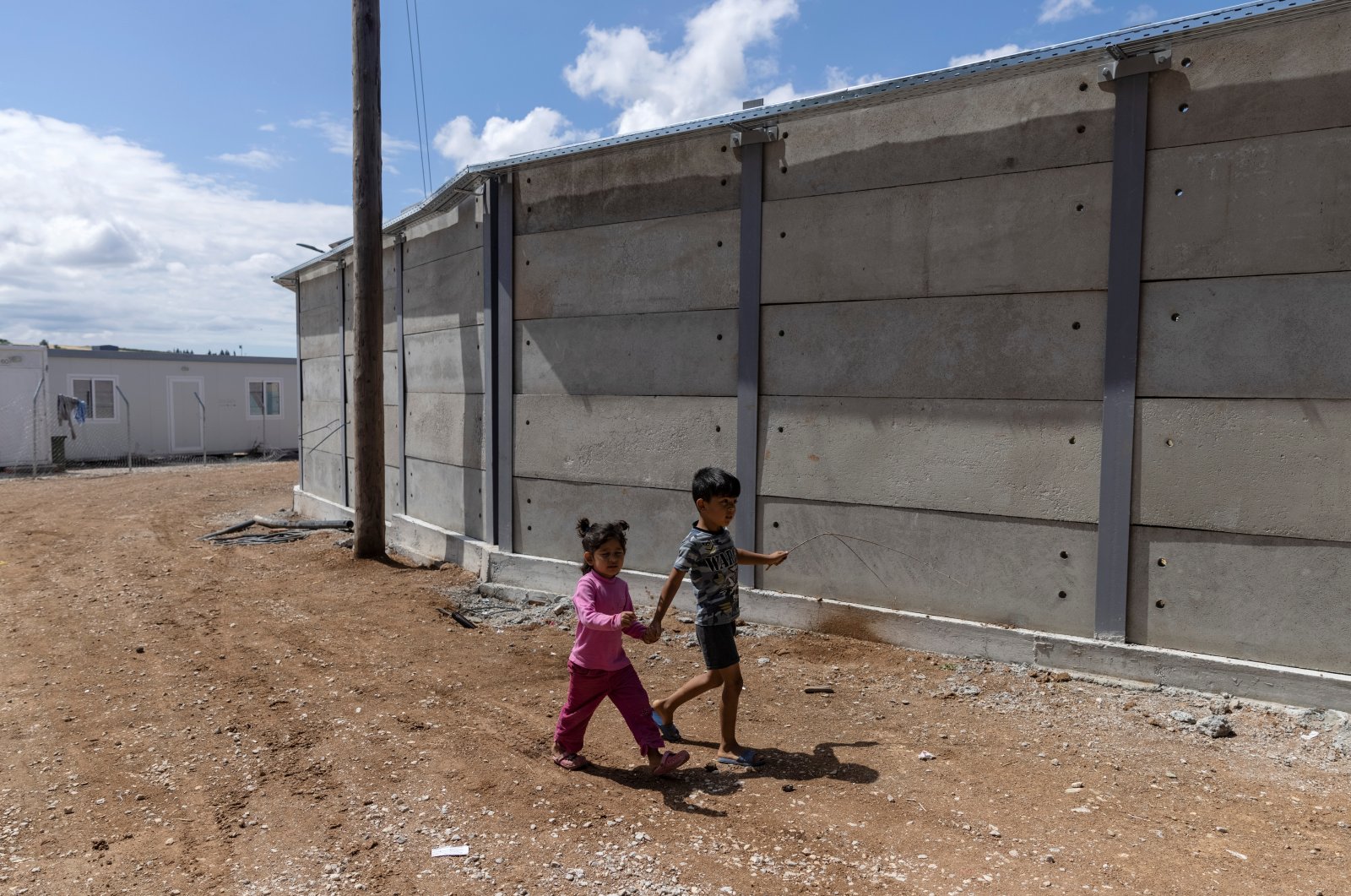 Children walk next to a newly built concrete wall inside the Ritsona camp for refugees and migrants, in Greece, June 15, 2021. (Reuters Photo)
by Daily Sabah with Agencies Jun 20, 2021 2:29 pm
RECOMMENDED

Greece has ramped up its anti-migrant measures with the installation of Long Range Acoustic Device (LRAD) systems, which can cause permanent damage to hearing, on the country’s border with Turkey. The country has now started testing the systems, Anadolu Agency (AA) said in a report Sunday.

Being a sonic weapon, the LRAD is known for its potential to cause permanent damage to ears with its strong sound waves. The systems have been criticized for their use in crowd control due to their high decibel capacity as they were originally designed for long-range communications and are considered sonic weapons.

The devices can cause hearing damage and other health implications. They are used by law enforcement agents in the U.S., the Czech Republic, Japan, Spain, Poland and the United Kingdom.

Besides deploying the LRADs along its border, Greece also forces migrants to live in prison-like environments by building walls around the migrant camps, AA reported.

Greece is hardening its approach ahead of summer when migrant arrivals typically pick up. The country has defied criticism from aid groups and said it has little choice given a lack of support from the rest of Europe.

The squalid conditions, including walled camps and tougher border controls, facing many asylum-seekers were laid bare last year when a fire devastated the sprawling Moria camp on Lesbos. Greece has also denied repeated accusations that its coast guard vessels have pushed back migrant boats as they entered Greek waters from Turkey.

Greek Migration Minister Notis Mitarachi says the government is taking a tougher approach "so we don't send the wrong message of incentivizing people to come" to Greece.

"Our policy is strict but fair," Mitarachi told Reuters.

Greece was the front line of Europe's migration crisis in 2015 when a million refugees from Syria, Iraq and Afghanistan landed. The numbers have slowed sharply since, but Greece says it is still left shouldering much of the burden.

Outside Athens in the camp of Ritsona, signs of the stricter policy are visible. Concrete-fenced, it resembles a small walled town, with makeshift grocery stores, a butcher and a cafe blasting Arabic music.

"Before, we were in an invisible jail. Now it (is) a visible jail," said Liban, who fled Somalia in 2018 when drought and ongoing conflict left half the population without food, water or shelter. He asked that his full name not be used because his asylum application was pending.

In addition to fencing off camps, Greece launched an EU-wide tender in June to build two closed-type facilities on the islands of Samos and Lesbos, where the former occupants of Moria are housed on an abandoned army firing range.

Medical charity Doctors Without Borders (MSF) said a "policy-driven humanitarian crisis" was unfolding on the five islands near Turkey, where it has treated more than 1,300 people, a third of them children, for mental health issues.

"This obsession with deterrence and the obsession of control and at the same time, zero investment in integration, is only causing pain and nothing else," MSF's Greece director Christina Psarra said.

Greece says its policies are bearing fruit. In the months through May, there were more returns than arrivals and flows were down 68%, the migration ministry said. The number of people in camps was down 71% since last May.

But with instability in Syria, conflict in Somalia and the Taliban gaining strength as international forces prepare to leave Afghanistan, the drivers of migration remain strong.

In June, Greece issued a decision designating Turkey a "safe country" for asylum-seekers from those countries, making it harder for their asylum requests to be approved.

Mitarachi said Greece granted asylum to qualified applicants but "we don't want to be the gateway to Europe for the smuggling networks."

Greek forcefully pushes back migrants, refugees and asylum-seekers either from land or sea and in some cases, tortures and mistreats them, seizes their personal belongings, puts their lives at risk and even causes their deaths, all in violation of international law.

Rights groups, including the United Nations High Commissioner for Refugees (UNHCR), have repeatedly called on Greece to investigate pushback claims.