Greek side pushes for federal solution to Cyprus issue 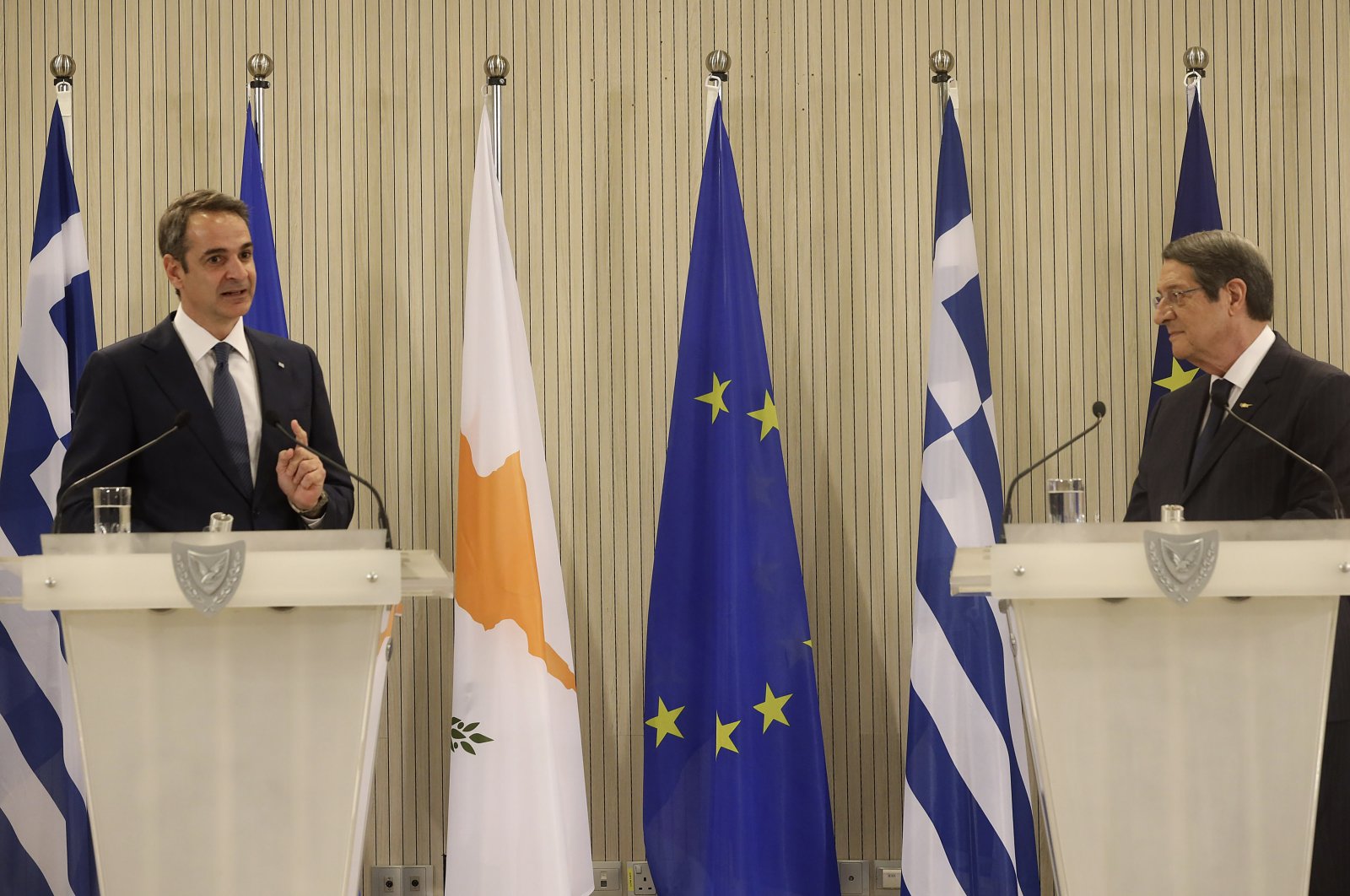 Greek Prime Minister Kyriakos Mitsotakis (L) and Greek Cypriot leader Nicos Anastasiades talk during a press conference after their meeting at the presidential palace in Nicosia on the island of Cyprus, Feb. 8, 2021. (AP Photo)
by DAILY SABAH Feb 09, 2021 11:25 am
RECOMMENDED

Greece and the Greek Cypriot administration on Monday continued to press for a federal solution to the Cyprus issue, though that position has yielded nothing in a half-century of efforts.

In a joint statement following a meeting in southern Cyprus, Greek Prime Minister Kyriakos Mitsotakis and Greek Cypriot administration leader Nicos Anastasiades reiterated their desire to participate in an informal 5+1 meeting on Cyprus that includes the two parties on the island, the three guarantor countries and the United Nations but refused to discuss any solution not based a bi-communal, bi-zonal federation.

Mitsotakis underlined that Athens' top priority in Cyprus is to find a functional solution that can be accepted by the two sides of the island and argued that the Turkish side's insistence on a two-state solution has been rejected by the European Union.

Anastasiades stated that the reunification of the island should include the end of the "outdated" guarantor system and that Turkey should withdraw its troops from Cyprus that were deployed there to protect Turkish Cypriots from ethnic violence.

Tatar, a fierce supporter of the two-state solution for the Cyprus issue, was elected president of the TRNC in October.

Last week, British Foreign Minister Dominic Raab urged flexibility and compromise so the most can be made from the U.N.'s new bid to restart Cyprus talks. He pledged support in helping to “break the logjam” that has blocked a peace deal for nearly a half-century, fueled tensions over offshore energy reserves and encumbered Turkey’s relationship with the EU.

U.N. Secretary-General Antonio Guterres is expected to call a meeting next month that will bring together rival Greek and Turkish Cypriots as well as Cyprus’ guarantors – Greece, Turkey and Britain – to gauge the chances of resuming talks.

Ankara's first reaction to Mitsotakis and Anastasiades' statement came during the opposition Good Party's (IP) group meeting in the Turkish Parliament on Tuesday.

IP chair Meral Akşener condemned the Greek Prime Minister's remarks and said: "Although you could never accept it, the TRNC is a sovereign state. You should know your place."

She also criticized Mitsotakis' statement that "our strategic target is to end the Turkish occupation on the island" and said that it was the latest example of a discourse always used by populist Greek politicians.

"There is no Turkish occupation in Cyprus, but there is a Turkish presence. Keep it in your mind," she said, while urging Mitsotakis to keep his focus on the domestic issues of his country.

The TRNC was founded in 1983. Currently, the TRNC has a population of almost 400,000 people. Even though it is not recognized by any country other than Turkey, it is a model state in terms of its democracy and freedom. A 2016 Freedom House report called the nation "free" when it comes to political rights and civil liberties.