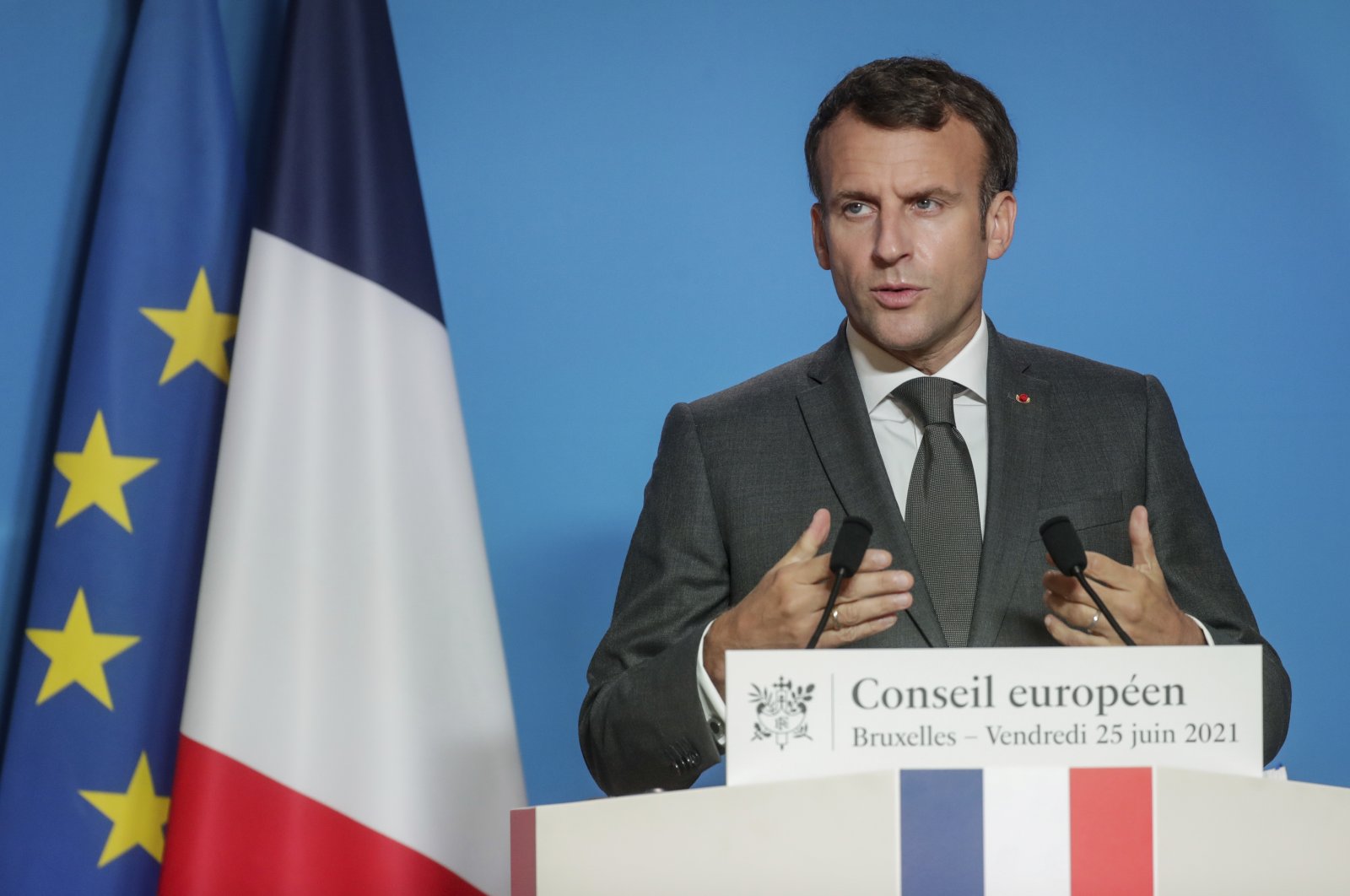 French President Emmanuel Macron talks to journalists during a news conference at the end of an EU summit at the European Council building in Brussels, Friday, June 25, 2021. (AP Photo)
by Daily Sabah with Reuters Jun 25, 2021 3:17 pm
RECOMMENDED

French President Emmanuel Macron said Friday that tensions with Turkey have eased over the last few weeks but European countries will remain cautious.

"Tensions have eased in recent weeks," Macron told a news conference when speaking about Turkey.

"We will continue to be vigilant throughout the summer but also to reengage in joint work," he added.

European Union leaders greenlighted plans Friday to give Turkey another 3 billion euros ($3.6 billion) over the next few years to provide fresh assistance to Syrian refugees on its territory and to help the country boost border controls.

“It’s about additional funds of 3 billion euros, then afterward also funds for Lebanon and Jordan,” German Chancellor Angela Merkel told reporters. She said the plan, drawn up by the EU's executive branch, “will soon be formally endorsed.”

Turkey reacted coolly to the plan, saying it is a way for the Europeans “to ensure the EU’s own peace and security.”

Turkey’s Foreign Ministry said in a statement Friday that “reducing cooperation on migration to a financial dimension is a big delusion.” It called for greater cooperation between Turkey and the EU to deal with the issue.

The ministry called for a review of the Turkey-EU migration deal reached in 2016 in a manner that “responds to the needs of the day and common interests.” It said that other European decisions about Turkey were far from “containing expected and necessary steps.”

The ministry specifically complained that no decision was taken to implement a “positive agenda” in relations between the bloc and Turkey, including the agreement on the customs union update. It insisted that Turkey has fulfilled its “responsibilities in terms of reducing tension and initiating a dialogue” with Greece.

Well over 1 million migrants entered the EU in 2015, many of them fleeing conflict in Syria and Iraq. The arrivals through Turkey overwhelmed facilities in the Greek islands and sparked one of the EU’s biggest-ever political crises. To persuade Turkey to stop people from leaving its territory, the 27-nation bloc offered the country 6 billion euros for Syrian refugees in Turkey and the prospect of fast-track EU membership talks and visa-free travel in Europe for its citizens. Arrivals quickly dropped to a relative trickle, and the EU is keen to update the arrangement.