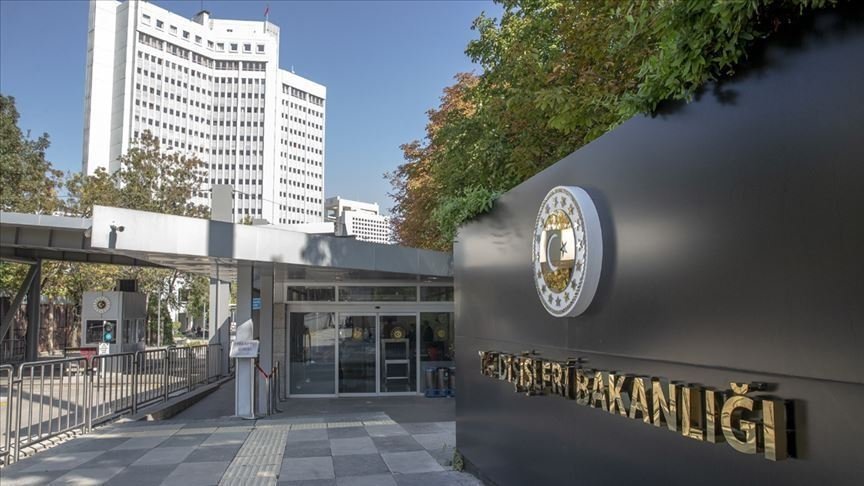 Turkish Foreign Ministry in Ankara, Turkey. (File Photo)
by DAILY SABAH WITH AA May 20, 2021 3:33 am
RECOMMENDED

Turkey on Wednesday rejected the European Parliament's "unilateral and by no means objective" 2019-2020 report on Turkey, underlining that drafting such a statement at a time when efforts are being made to revive Turkey-EU relations on the basis of its prospective EU membership within the framework of a positive agenda "is unacceptable."

"We reject this biased text that not only includes false allegations regarding human rights, democracy, the rule of law, our governmental system and political parties; and views Turkey's effective, solution-oriented, humanitarian and enterprising foreign policy as a threat; but that also reflects the completely unfair and biased Greek and Greek Cypriot arguments regarding the Aegean, the Eastern Mediterranean and Cyprus issue and supports the one-sided and inconsistent Armenian narratives regarding the 1915 events," the Foreign Ministry said in a statement.

The ministry stressed that the wording of the report, which attempts to call Turkey's accession negotiations into question, reflects a "lack of vision and an effort to deviate from the principle of pacta sunt servanda," meaning agreements must be kept.

"It is well known by the EU institutions and the EP members that the standstill in Turkey's accession negotiations is not due to Turkey's lack of will for reforms or any shortcoming in assuming the EU acquis, but, rather, to the fact that certain circles have exploited the membership process as an opportunity for political gains against Turkey since the beginning of this process," it added.

The ministry also underlined that EU membership is a strategic goal for Ankara and would benefit all of Europe and beyond, adding that Turkey will "decisively" continue its efforts in line with this objective.

"While the EU expresses its appreciation for our efforts, particularly with regard to the migration issue, within the scope of the Turkey-EU Statement of March 18, 2016, for which we have fulfilled our commitments, the EU should get out of the vicious circle of not taking any concrete step to fulfill its own commitments in the March 18th Statement, ranging from Turkey's EU accession process to cooperation on migration," it said.

In exchange for these promises, Turkey took responsibility for discouraging migration through the Aegean Sea by taking stricter measures against human traffickers and improving the conditions of Syrian refugees living in Turkey. Despite significant developments controlling migration traffic, the EU has not delivered on its commitments stated in the deal.

Although the first stage of funding was provided to Turkey, the EU has yet to fulfill the second stage or other provisions such as establishing the visa-free deal for Turkish citizens and updating the customs union. Turkey currently hosts some 3.6 million Syrian refugees, more than any other country in the world, and has spent $40 billion (TL 334.68 billion) through the process, according to official figures.

It also highlighted that as a candidate country, Turkey expects the European Parliament to carry out "constructive efforts" about how relations can be improved with Ankara and how it can contribute to Turkey's EU integration process, rather than "being a platform for baseless allegations and blind accusations against Turkey."

An official candidate for bloc membership since 1999, Turkey's EU accession talks began in 2005. The talks have stalled in recent years, a development Turkey blames on political moves by the Greek Cypriot administration and others.

Turkish Foreign Ministry spokesperson Tanju Bilgiç later answered a question regarding the European Parliament's report, which also suggested an EU-wide ban for Turkish associations, nongovernmental organizations and foundations associated with the Nationalist Movement Party (MHP) in Turkey, among other things.

Underlining the fact that some associations that are clearly affiliated with the PKK terrorist group and the Gülenist Terror Group (FETÖ), responsible for the July 15 defeated coup in Turkey, operate in some EU countries under the guise of freedom of expression and assembly, Bilgiç said: "Suggesting a ban and incorporation into the bloc's terrorist list for organizations affiliated with one of our country's long-established political parties can be understood only through an abdication of reason."

He emphasized that such actions, which would amount to limitations on basic rights and freedoms, indicate that the European Parliament has lost sense of reality, and essentially drifted from European values. He stressed that racism and fascism belong in Western political terminology and should not be confused with understanding nationalism in Turkey.

Such slander, which is fabricated by the anti-Turkish Armenian diaspora, PKK and FETÖ circles and utilized by European politicians for internal policy purposes, is unacceptable, Bilgiç remarked.

In its more than 40-year terror campaign against Turkey, the PKK – listed as a terrorist organization by Turkey, the U.S. and the EU – has been responsible for the deaths of at least 40,000 people, including women, children and infants. The YPG is the PKK's Syrian offshoot.