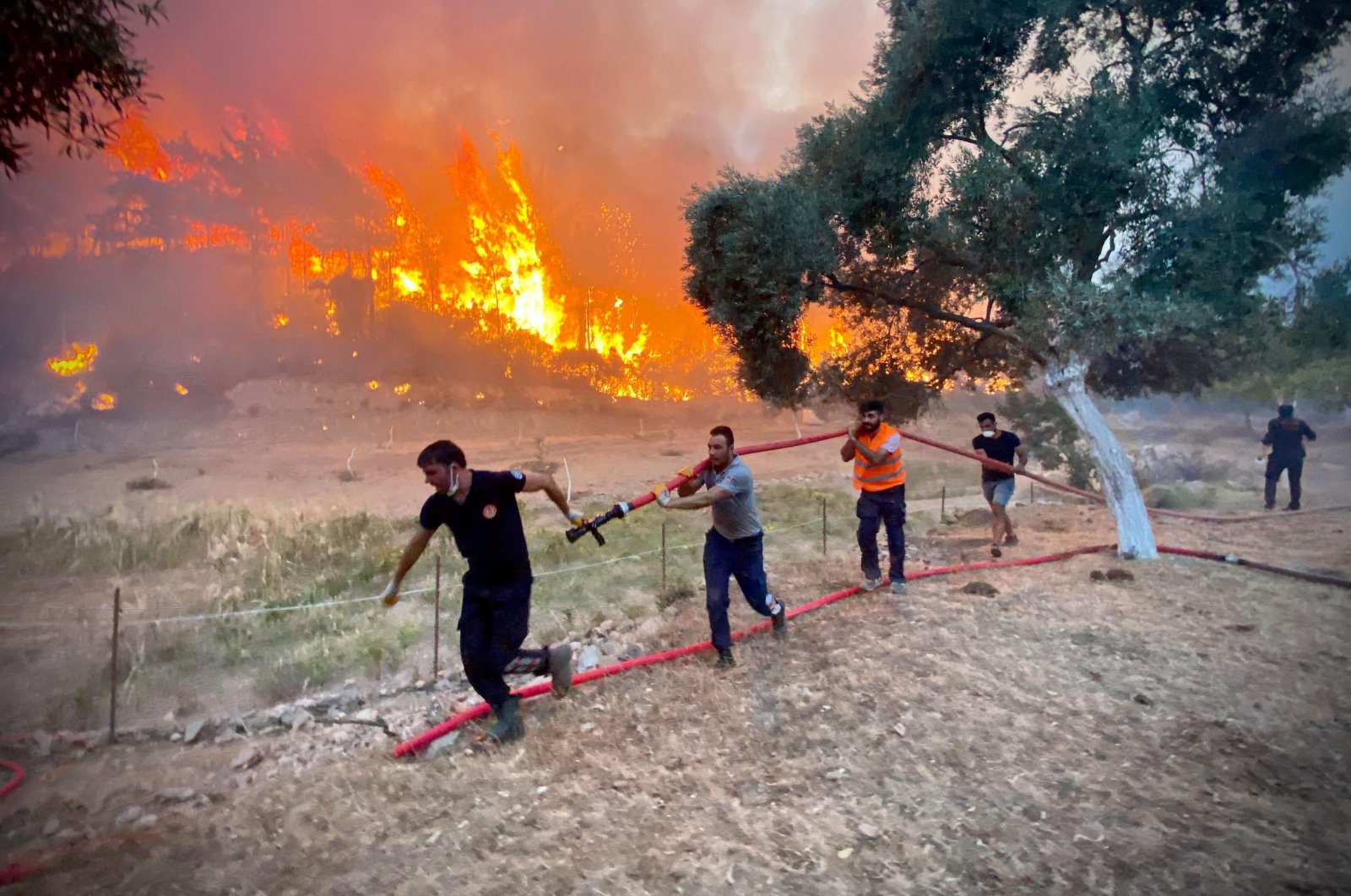 Firemen and local volunteers carry hosepipes as they fight to extinguish a wildfire in Ören, in the holiday region of Muğla, southwestern Turkey, Aug. 6, 2021. (AFP Photo)
by DAILY SABAH Aug 06, 2021 1:06 pm
RECOMMENDED

Informing people to raise awareness and fighting against disinformation are two prior strategies for the Turkish government, the country's head of Strategic Communications and Crisis Management Department Gökhan Yücel at the Directorate of Communications said Friday, amid the recent reports on possible influence operations spreading misinformation about Turkey's forest fires.

In a briefing about Turkey's ongoing forest fires, organized by the Directorate of Communications in Istanbul, Yücel said that the directorate aims to provide people with the most accurate and updated information about the disaster.

However, he added that there are some people and certain groups that try to disrupt these efforts.

"Some people want to manipulate and create an agenda to harm Turkey," he said, adding: "The campaign was used and manipulated by those certain groups who wanted to use it for their own agenda to show the government and people in a false way through disinformation."

As Turkey battles forest fires, many social media users took to Twitter to express their sorrow and to call for global help to Turkey through an aid campaign under the hashtag "#HelpTurkey," also prompting a nationalistic reaction over the call’s perceived implication that the country is portrayed as unable to fight the blazes.

Yücel underlined that the best strategy against disinformation is to inform people by simplifying everything to make the information simple and accessible.

He stated that the directorate keeps daily reports prepared by the staff on the situation of forest fires. According to these reports, 208 fires in 44 provinces have been recorded since July 28. While 196 of them were gotten under control, 12 fires in 5 provinces still continue to burn.

He noted that the prosecutors launched investigations over public disinformation and manipulation efforts, underlining the intention to understand what is going on behind the scene.

The Ankara Chief Public Prosecutor's Office on Thursday opened an investigation into the content being shared with the "#HelpTurkey" hashtag on social media that was supposedly created in response to the ongoing wildfires gripping the country.

According to a statement released by the prosecutor's office, the relevant units have launched technical investigations into posts being shared on social media and news about the forest fires that began on July 28.

It stated that as a result of the research, it was determined that certain fake accounts were trying to create panic while insulting the Turkish state and government. The accounts spread disinformation and tried to cause an atmosphere of chaos, it noted.

British academic Marc Owen Jones, for his part, said at the briefing that his studies focus on research on disinformation, generally based on social media analysis.

He explained that through disinformation in social media, some groups with their own agenda try to create an artificial manipulation of the narrative.

He said that there are hundreds of fake accounts behind the campaign supported by bot accounts to promote the hashtag.

Jones said that these types of disinformation campaigns especially flourish in this region of the world, and Turkey is often the target of external influence operations in the region.

He said that he used the recent campaign as an opportunity to maximize awareness of disinformation and manipulation.

The “#HelpTurkey” hashtag created on Twitter in the wake of forest fires in Turkey “suggested a possible influence operation,” even though many people with good intentions also participated in it, Jones said in a thread on the microblogging site late Monday.

“This, coupled with the scale of the campaign, suggested a possible influence operation. To be clear, though, the hashtag had many real users.”

The academic that works at Qatar’s Hamad Bin Khalifa University’s College of Humanities and Social Sciences also underlined that even though many people joining the hashtag did not have any ulterior motives, the technical analysis of the hashtag suggested a possible “influence operation.”

Fueled by sweltering summer temperatures baking much of the Mediterranean region, blazes erupted in Turkey last week, many of them along southern coasts beloved by Turkish and foreign tourists.