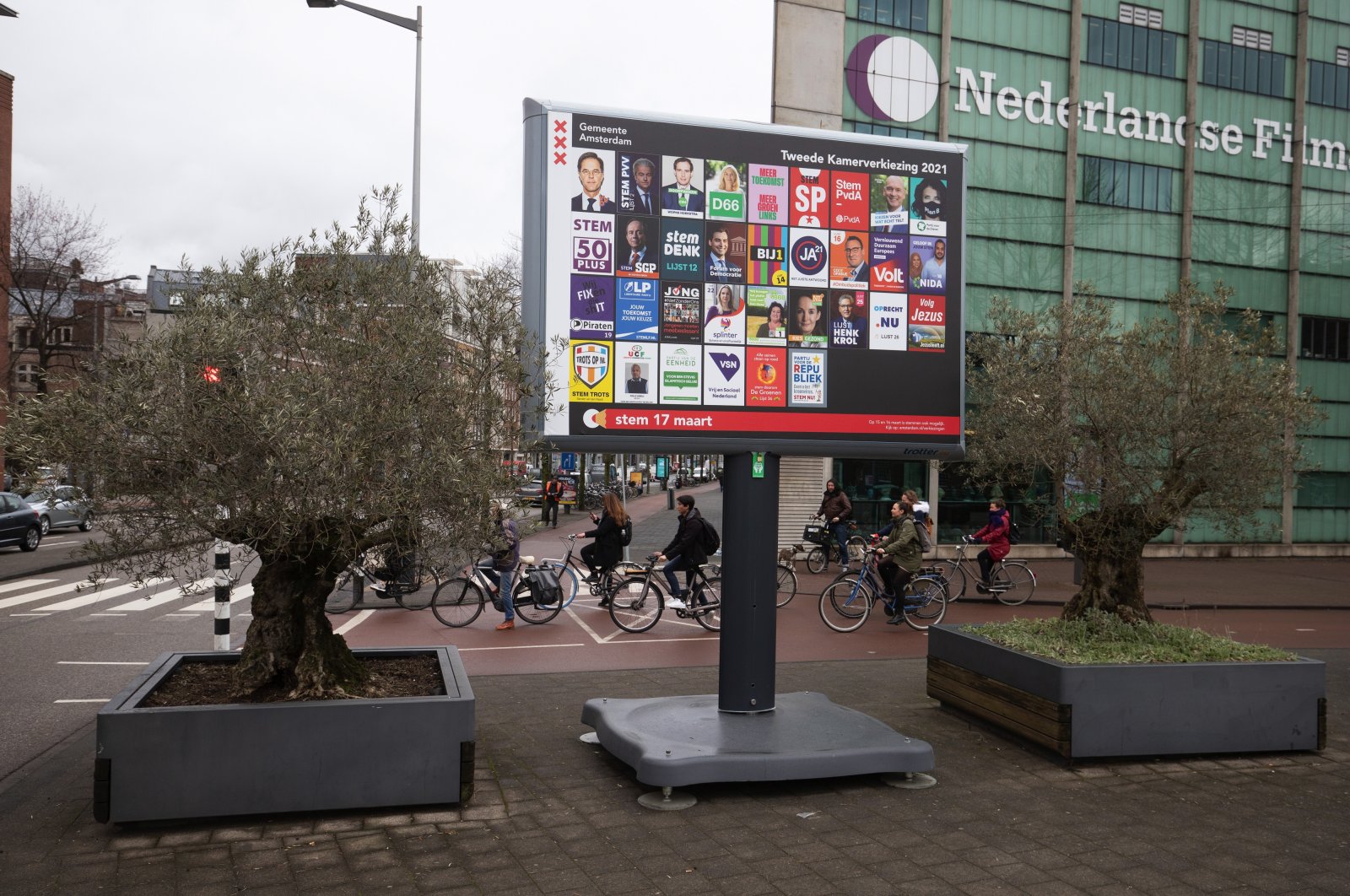 As COVID-19 restrictions and anti-Islam, anti-immigration rhetoric come to the fore in the upcoming elections, the DENK party aims to tackle this problem and adopt a more inclusive stance in the Dutch political scene

The coronavirus pandemic and the much-debated issue of immigration are set to dominate the upcoming Dutch general elections as voters will head to the polls next week with Prime Minister Mark Rutte on course to win a fourth term in office.

“As in every election, populism, unfortunately, increases further. A policy against Turkey and Islam is emerging,” head of the Dutch DENK Party and deputy Tunahan Kuzu told Daily Sabah, indicating that his party stands against those discriminating against people and defaming Islam.

Elaborating that DENK was created after having left the Labour Party in 2014 due to their rigid integration policies, Kuzu underlined that he aimed to build a new political movement in the face of a politics that is gradually becoming harder and leaning toward the right.

“Hundreds of thousands of youth of foreign origin living in this country are not treated equally due to a false integration policy,” Kuzu pointed out, saying that they even face discrimination in everyday routines, including in finding a job or renting a house. “We raise our voice so that our citizens of third-generation Turks, Moroccans, Surinamese have equal rights. Our role is to voice this everywhere, including in Parliament.”

The DENK Party currently has three deputies in parliament as well as almost 30 council members in municipalities. The party is supported by Turkish, Moroccan, Surinamese and Dutch people. “Our message is not only to people of foreign origin but also to the Dutch people. The Netherlands belongs to all of us. The hundreds of thousands of foreign origin people in the country are a part of the Netherlands,” Kuzu highlighted.

Though the far-right has never been a major force in the Dutch political landscape, it has existed and attracted a substantial number of people.

Despite the Netherlands recently suffering the worst riots for decades over its COVID-19 curfew, Prime Minister Mark Rutte leads in the polls as the Dutch appear to rally around the flag after a year of the pandemic.

But amid a tough COVID-19 lockdown, that support is showing signs of eroding as the Dutch grow weary of pandemic restrictions.

“Though the Dutch people are angry at Rutte due to the coronavirus restrictions, they will still give him enough votes to gain 39 seats due to their common sense,” journalist Ilhan Karaçay said.

Kuzu explained that although the atmosphere is influenced by the coronavirus pandemic, the DENK Party still met with voters, listened to their problems and carried these issues to parliament.

A total of 37 parties, the most for decades, are competing for 150 seats in the Dutch lower house of parliament, in a crowded political landscape that usually produces unwieldy coalitions.

The election is being held over three days, starting with a limited number of polling booths opening on March 15 and 16 for people who are extra vulnerable to the coronavirus before the main voting day on March 17. Some 2.4 million people aged 70 and above are entitled to vote by mail.

Rutte's conservative People's Party for Freedom and Democracy (VVD) is currently projected to win about twice as many seats as its nearest rival in the 150-seat lower house of parliament.

Rutte's VVD currently has 33 seats and leads a four-party coalition along with the conservative Christian Democratic Appeal (CDA) and Christian Union, and the center-left D66.

If the VVD emerges as the largest party in parliament, the 54-year-old Rutte will be first in line to form the country's next governing coalition and begin a fourth term in office. That would make him the longest-serving Dutch prime minister, overtaking the 12-year tenure of Ruud Lubbers.

The largest Dutch opposition party is the Party for Freedom (PVV) led by populist, anti-Islam lawmaker Geert Wilders, who has harshly criticized the government's handling of the COVID-19 crisis, from the slow start of its vaccination program to its imposing a curfew.

“Unfortunately, people like Wilders continue to defame Islam on a daily basis. Most parties have acknowledged this. Yet we do not hesitate to counter such racist acts everywhere and every time,” Kuzu added.

The right-wing populist Forum For Democracy of Thierry Baudet, which performed strongly two years ago during a provincial election, has imploded over the last year amid reports of anti-Semitism in its ranks.

“Geert Wilders and his kind are monsters created by 9/11. Previously, the Dutch people would not lean toward such ideologies. Infamous politicians such as (far-right Dutch politician Joop) Glimmerveen in the 1980’s and (Dutch politician of the Centre Party (CP) and later founder of the Centre Democrats (CD) party Hans) Janmaat in the 1990’s would not get votes,” Karaçay said.

He explained that however, after 9/11, a far-right politician, Pim Fortuyn, gained significant popularity but was murdered. The flamboyant Fortuyn, known for his far-right, anti-Islam and anti-immigrant stance, was gunned down in a parking lot by an animal activist, an act that shattered the liberal Netherlands' image of itself as a unified and secure society.

Saying that Wilders is currently losing points, Karaçay stated that Baudet “of the same ideology” was quite popular in recent years and has gained a significant number of votes.

Conversely, Ibrahim Görmez, retired director of the Netherlands Islam radio and television institution stated that: “Unfortunately Wilders and Baudet have built their party programs upon anti-Islam rhetoric and have a huge vote potential,” indicating that other parties also see that such a path proves effective. “The DENK Party in this regard is a big chance,” he continued.

Journalist Burhanettin Carlak explained that in the Netherlands the people are highly critical and question everything instead of following movements.

“I do not expect any change to the Dutch people’s ties to universal democracy and human rights. The Dutch are prudent, restrained and do not favor big political adventures,” he stated.

Saying that though marginal parties do not become the ruling party, they influence conventional parties, Carlak added: “Yet, currently there are again two racist, xenophobic and Islamophobic parties among the four main parties."

Voting is as important for people of foreign origin as for the Dutch, Karaçay underlined, elaborating that the Netherlands in 1986 gave foreign nationals the right to vote for local elections, while it is obligatory to be a Dutch citizen to vote in general elections.

According to statistics, there are around 410,000 people with a migration background from Turkey in the country. Karaçay stated that around 230,000 have the right to vote and stand for elections, while he pointed out that there are 34 people of Turkish origin in the election lists of 37 parties.

He said that the foreign ministry and religious officials should be from the Netherlands while also touching upon the new judicial reforms in Turkey, saying they will also benefit Turks in the country.

The last Dutch elections in 2017 sparked fears across Europe that Wilders could ride a wave of populism to victory after the 2016 Brexit vote in Britain and the election of Donald Trump in the U.S.

Wilders has recently said he has no regrets and is ready to "step up" his campaigning against immigration, despite the coronavirus set to dominate next week's general election.

"Issues such as immigration are still important. For my voters, it's still number one. But if you look at the average Dutchman, corona is the number one issue indeed," Wilders told Agence France-Presse (AFP) in an interview at the Dutch parliament this week.

Despite that, Wilders said he saw no need to drop the anti-immigration and anti-Islam rhetoric that has defined his two-decade political career.

"The immigration of non-Western immigrants is an existential problem," said Wilders. "I believe we should even step up, to invest more in realizing this policy (of opposing immigration)."

Rutte and other parties have vowed to exclude Wilders from any coalition, a move that the PVV chief calls "very undemocratic."

"The more people vote for my party, the more difficult it will be to exclude us," Wilders said.

Karaçay similarly pointed out that “it is impossible that Wilders will be part of a coalition. No party wants to be in a coalition with them.”

Wilders was also unrepentant about past actions, including plans for a cartoon competition of the Prophet Muhammad in 2018 that he canceled after receiving death threats.

He was also convicted of collectively insulting Moroccan people at a 2014 rally – though he was later cleared of discrimination.

Last month, Wilders also came under fire for a provocative post he shared on Twitter, calling Turkish President Recep Tayyip Erdoğan a “terrorist,” as officials criticized the lawmaker and prosecutors launched an investigation into his post.

“The rising populist, racist and anti-Muslim movement is indeed dangerous. Politicians must put emphasis on this issue. They have to reject this instead of normalizing it. This kind of politics complicates the futures of hundreds of thousands of youth and leads them to be alienated,” Kuzu stated, saying that everyone must be able to be proud of his identity and religion.

The combination of nationalism with an emphasis on anti-Islam and anti-EU rhetoric has appealed to some circles in the Netherlands.

According to the Migration Policy Institute, two traumatic events created an opening for Wilders on the Dutch political scene: the assassination of Fortuyn in 2002 and the subsequent 2004 murder of filmmaker Theo van Gogh by a Dutch-Moroccan citizen after he criticized the treatment of women in Islam.

“Wilders, who founded the radical-right PVV in 2006, capitalized on this by anchoring his platform in a virulent critique of Islam. And while his incendiary rhetoric has been disavowed by the mainstream, his popularity spiked after he was found guilty in December 2016 of hate speech against Moroccans,” it said in a report published during the previous elections.