How did Turkey's Kavala case become a subject of intervention? 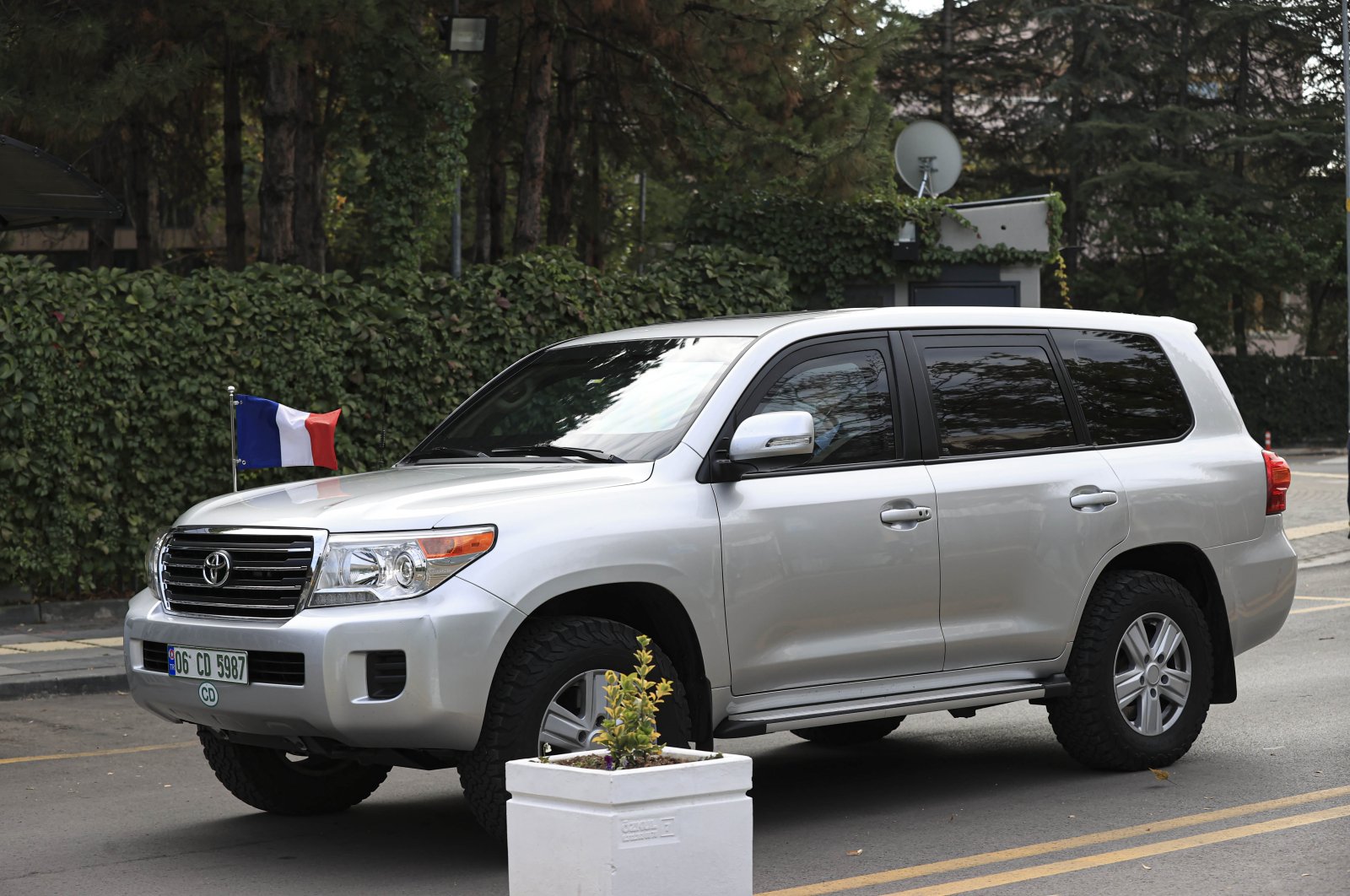 The French ambassador, who was summoned to the Turkish Ministry of Foreign Affairs for the statement about Osman Kavala, arrives at the ministry's headquarters in the capital Ankara, Turkey, Oct. 19, 2021. (AA Photo)
by Nur Özkan Erbay Oct 21, 2021 11:00 am
RECOMMENDED

Nowadays, Ankara's diplomatic traffic is busier than ever. President Recep Tayyip Erdoğan's African tour this week will be followed by visits to Azerbaijan, Italy and Scotland next week. Erdoğan will meet with the leaders of the G-20 in Rome and at the Climate Change Summit in Glasgow.

While Turkey has been striving for a permanent solution in Syria, using all its capabilities to ensure stability in northern Syria, Ankara also always keeps its military options on the table in the face of ongoing threats from terrorist organizations.

Meanwhile, despite the provocative moves and rhetoric of Greece in the Eastern Mediterranean, Ankara's patient and sober attitude continues. For the establishment of political stability in Afghanistan, Turkey is taking constructive diplomatic steps to maintain political stability and security in Afghanistan. Turkey is working with all its might for the proposed regional alliance for the achievement of peace in Karabakh and all the actors of the region. In fact, during Erdoğan's upcoming visit to Azerbaijan, the opening of Fuzuli Airport, which will be the gateway of Karabakh to the world, will be held.

Moreover, Turkey continues its intense diplomatic traffic with its interlocutors, especially the European Union, on solving and managing irregular migration caused by civil wars and conflicts in its region at the source.

There are numerous examples of Ankara's policies in the Eastern Mediterranean, the Caucasus, the Middle East and Africa, where Turkey prioritizes alliances in foreign policy and follows a win-win strategy. On the international scale, humanitarian crises, migration and pandemics can always be seen at the forefront of Turkey's headlines.

But despite of all this, it seems that Turkey's interlocutors do not attach the same importance to the principles of communication, dialogue, win-win strategies and multilateralism, which it prioritizes in diplomacy. Instead, select diplomatic missions seem to be more interested in Turkey's internal affairs nowadays.

As an example of this, ambassadors of 10 countries in Ankara have published a statement in the Osman Kavala case, which is actually an internal legal issue in Turkey.

The embassies of the United States, Canada, France, Finland, Denmark, Germany, the Netherlands, New Zealand, Norway and Sweden late Monday called for the release of jailed Turkish businessperson Osman Kavala, who has been imprisoned for four years over his alleged role in the 2013 Gezi Park protests and subsequent riots. Kavala is also accused of involvement in the failed 2016 coup attempt. Those charges were combined with the Gezi case in February.

Ankara reprimanded and summoned these ambassadors for once again attempting to intervene in its domestic politics and also called for them to respect the independence of Turkey's judiciary.

In accordance with the ambassadors' collective call, which was released on Monday, 10 ambassadors arrived at the Ministry of Foreign Affairs on Tuesday morning. Turkey's response was conveyed to the ambassadors, who were issued verbal warnings by Deputy Foreign Minister Faruk Kaymakcı.

A statement issued by the ministry also emphasized that the published joint statement contradicts diplomatic practices and international law.

"As recorded in our Constitution, it was emphasized that Turkey is a democratic state of law that respects human rights, and it was reminded that the Turkish judiciary would not be affected by such irresponsible statements," it added.

Considering all these statements and reactions, Turkey considers the statement of the ambassadors about the case to be a direct intervention in its independent judiciary and internal affairs. In addition, it also reminded of such violations of the sovereignty and independence of countries, as well as clearly and unequivocally warned the ambassadors to limit themselves within the responsibilities designated under the Vienna Convention.

Article 41, Section 1 of the Vienna Convention regulates the work of diplomats in foreign countries. It is considered the duty of ambassadors to comply with the laws and regulations of the receiving state, without prejudice to their privileges, sovereignty and independence. Again, it is also defined as the duty of ambassadors not to interfere in the internal affairs of the said state.

In fact, this is not the first time that the countries that made statements about the Kavala case have attempted to make statements about Turkey's internal affairs. Earlier, there were diplomatic crises over the ambassadors who came up with statements expressing concern about the interventions of the police in the Gezi incidents and about the events at Boğaziçi University. These ambassadors are not only sending political messages about the ongoing cases, but they are also trying to go to courts and put pressure on the independent judiciary, whether they are aware that it is a violation of the Vienna Convention or not.

In short, it is a great contradiction and undermines trust to see that ambassadors, especially regarding Turkey's internal affairs and judicial processes, do not offer the same sensitivity or performance in humanitarian and diplomatic crises in our region that require collective solutions.

For example, how many times have these ambassadors announced a solution to the humanitarian crisis in Syria? Did these countries agree to a conference proposed by Ankara to resolve tensions in the Eastern Mediterranean? What steps toward cooperation have they taken with Turkey to solve the hostility against Islam and Turkishness in their countries?

From this point of view, it should be taken into account that Turkey, which acts with a constructive and win-win approach in its region and in the world, maintains its tradition of not interfering in the internal affairs of any country.

In the road map followed by Turkey, whose soft power continues to grow with increasing momentum in many regions and countries, meddling in the internal affairs of these countries is not an option.

So, the countries that consider their own country in the first league in terms of democracy, human rights, an independent judiciary, sovereignty and their ambassadors must first make sure that their hands are clean before starting to point at others.

If I were to write which countries are involved in internal affairs, by what methods and what damage they are doing to those countries, it would likely be a book that would be too long to finish.