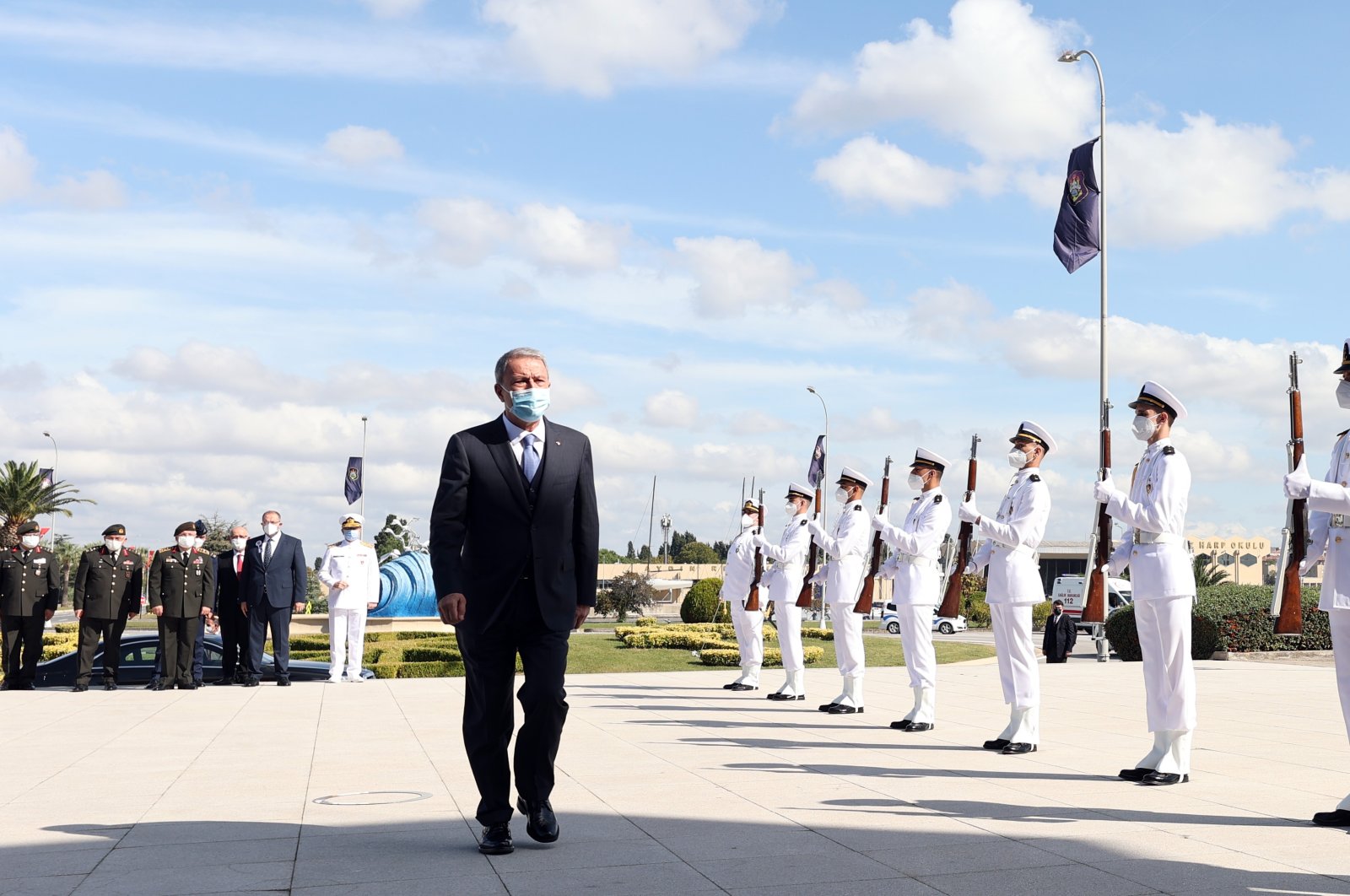 Some politicians in Greece are trying to escalate tensions rather than finding solutions to the problems, Turkey's Defense Minister Hulusi Akar said Friday, adding that "They should know that these are futile efforts and that they cannot defeat Turkey with such actions and rhetoric."

Speaking at the opening ceremony for the 2021-2022 academic year of the National Defense University Naval School, Akar touched upon the tensions between Turkey and Greece in the Eastern Mediterranean that have been increasing again recently, and Greece's recent bolstering of its military capabilities.

Akar underlined that Turkey wants the problems with Greece to be resolved within the framework of international law by finding political solutions through dialogue within the scope of good neighborly relations. He noted that the goal is for the people of the two sides to live safe, prosperous lives in a peaceful environment.

"This is our sincere opinion, our wish. Unfortunately, some politicians, especially in Greece, are escalating the tension with their aggressive actions and rhetoric, instead of finding solutions to the problems mentally and logically in order to disrupt bilateral relations. Statements made by senior politicians in Greece are irrational and illogical. It does not comply with international law and good neighborly relations. They should know that these are futile efforts and that they cannot defeat Turkey with such actions and discourses," he said.

Stating that they invited both the political and military leaders of Greece to examine the events with reason, logic and common sense, Akar said that some former soldiers, politicians and academics have come to realize that Turkey is in the right.

"Greece and the Greek Cypriot Administration think they can get somewhere with some exercises and activities," he added.

Tensions are once again rising between Turkey and the Greek and Greek Cypriot administrations over maritime borders and drilling rights in the Eastern Mediterranean after several months of relative calm.

The Turkish Foreign Ministry last week described recent Greek explorations as "provocative activities" that endangered peace and stability in the Eastern Mediterranean. Ankara announced that it would take all "necessary steps on the ground" to stop this. "The main cause of the tension in the Eastern Mediterranean in recent years has been Greece's and the Greek Cypriot administration's maximalist maritime jurisdiction area claims and unilateral acts that ignore Turkey's and the TRNC's rights and interests," read the statement.

Turkey has sent drillships with a military escort to explore for energy on its continental shelf, stressing that it and the Turkish Republic of Northern Cyprus (TRNC) have rights in the region. To reduce tensions, Turkey has called for dialogue to ensure the fair sharing of the region's resources. The ministry pointed out that President Recep Tayyip Erdoğan called on the European Union to convene an "inclusive conference" in the Eastern Mediterranean last year. Turkish Cyprus also made a detailed proposal to the Greek Cypriot side in July 2019 regarding hydrocarbon resources, it added.

Akar also pointed to Greece's penchant for armament, especially lately, noting the agreements Greece has come to with the encouragement and provocation of certain countries.

"You cannot gain an advantage against Turkey with such attempts, give up this effort. The economic situation in Greece is known, they are in serious debt. It makes the economy worse by making some wasteful expenditures with the love of armament (instead of) for the welfare of the Greek people. Reasonable people in Greece should see this. None of these initiatives can progress. We have taken every precaution to be taken against this, and we are taking it. We are extremely determined and capable in this regard," he said.

Despite having said that it has no intention of entering an arms race with its neighbor and NATO ally Turkey, Greece announced last week the purchase of three new Belharra frigates from France with the option for one more. Earlier last month, Greece also announced that it was planning to buy another six Rafale fighter aircraft. Athens has already ordered 18 of the jets. "Soon there will be 24," Greek Prime Minister Kyriakos Mitsotakis said in a speech in Thessaloniki that was broadcast on Greek television.

Most recently, the Greek parliament on Thursday ratified the defense deal struck with France for the purchase of three French-made Belharra frigates. Turkey has criticized the agreement, saying it threatens "regional peace and stability." Ahead of the Greek parliament vote on Thursday, Mitsotakis claimed that the new defense agreement between Greece and France will allow both sides to come to one another's rescue in event of external threats, as the country is involved in a number of disagreements with Turkey.

The Greek announcement of boosting military ties with France comes after Akar stated recently that secondhand French Rafale jets would not change the power balance in the region. Speaking then on Athens’ purchase of French Rafale jets, Akar had said: “They have been engaging in an arms race. They buy jets, arms, equipment. It is not possible to change the power balance with a few secondhand jets.”

Describing the consultation, trust and confidence-building meetings between Turkey and Greece and the technical meetings at NATO headquarters as an opportunity to further dialogue in a stable environment, Akar also said: "We held the meeting within the framework of confidence-building measures three times. We are waiting for them in Turkey for the fourth meeting."

"Turkey is in no way a threat to anyone, except to protect its own rights and laws, it does not seek to violate anyone's rights. We respect everyone's borders, rights, laws and sovereignty. Everyone should know that Turkey is a safe, strong and effective ally. We had the opportunity to have dialogue and contacts with our interlocutors, that is, at the level of ministers and chiefs of general staff. We had the chance to prevent possible crises through negotiations. Now this has disappeared. We say that we are ready to talk, but our interlocutors did not maintain this approach," Akar stated.

The 63rd round of consultative talks between Turkey and Greece was held in Ankara on Wednesday. The talks, which began in March 2002, aim to resolve bilateral disputes in the Aegean and Mediterranean and lay the groundwork for a fair, lasting and comprehensive settlement to outstanding issues in the Aegean Sea. In January they agreed to resume talks after a five-year hiatus following months of tensions. Since then, Ankara and Athens have held two rounds of talks, with the previous one in Athens in March.

Akar touched on Greece's continental shelf violations and recent military drills on islands very close to the Turkish mainland, saying: "it should be seen by the whole world, especially the EU countries, that the party that increased the tension with these provocations is Greece. We have taken every precaution and we are taking it. We are patiently following the issue closely. Necessary answers will be given on time and on time."

Stating that the Greek Cypriot administration has ignored the Turkish presence on the island for hundreds of years, Akar said: "You cannot produce any solution without acknowledging the Turkish presence, we will never allow this, it is not possible in any way. We are talking about two sovereign, independent states with equal rights. This is our aim and view, this will be accepted, negotiations will be held within this framework and states will continue their lives in their own fields."

The two NATO allies have been at odds over decades-old issues including the extent of air and maritime boundaries in the Aegean Sea and the future of the divided island of Cyprus. Turkey and the Turkish Cypriots have ruled out discussing a federal system to reunify the island, insisting that a two-state accord is the only way forward.