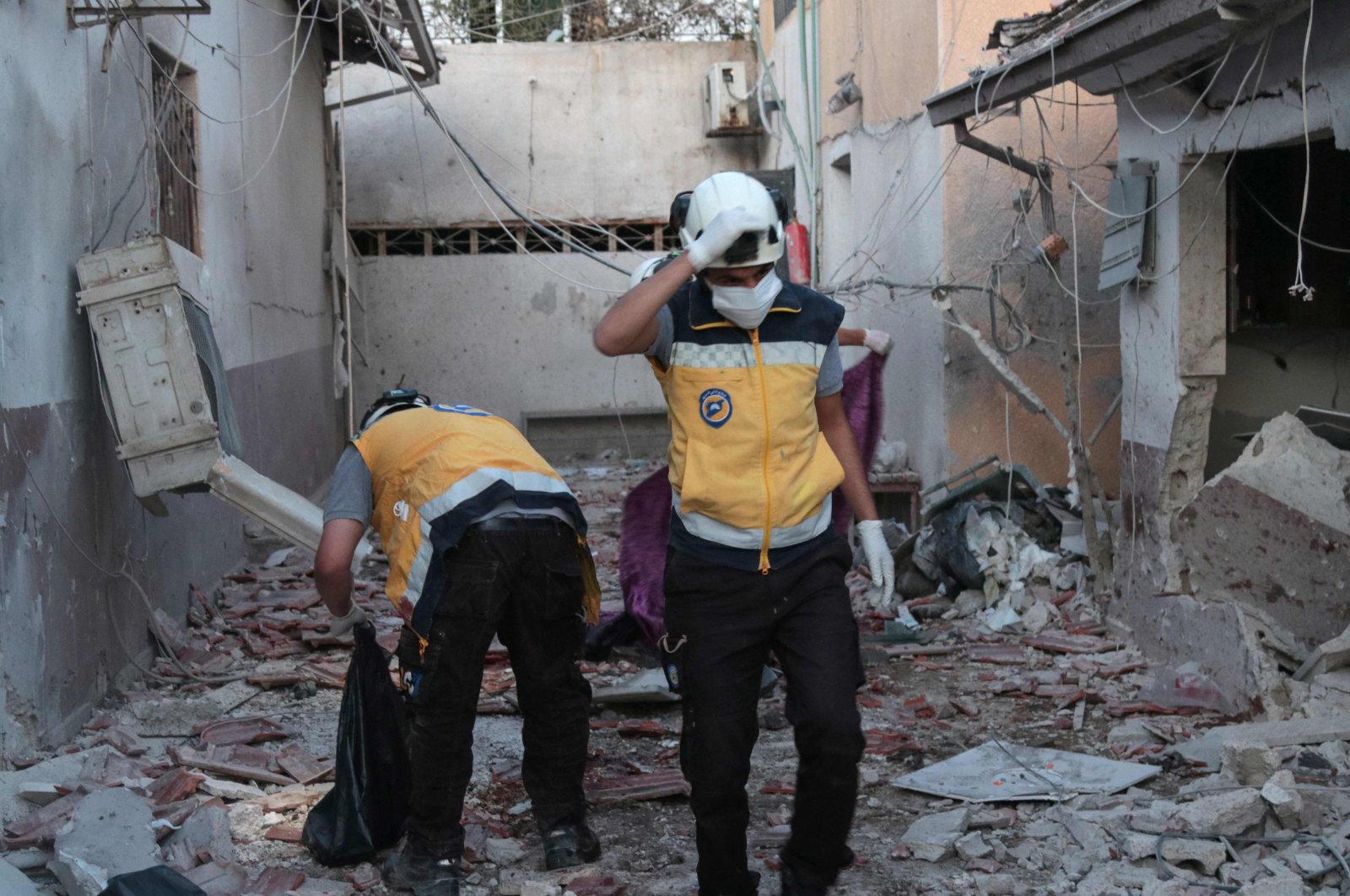 Members of Syria's Civil Defence (White Helmets) sift through the rubble at Al-Shifaa Hospital following the YPG shelling of the opposition-held city of Afrin in northern Syria, June 12, 2021. (AFP Photo)
by DAILY SABAH WITH AGENCIES Jun 13, 2021 11:11 am

Turkey has strongly condemned an attack carried out by the YPG, the Syrian branch of the PKK terrorist group, on a hospital in northern Syria's Afrin that killed at least 13 civilian patients and injured dozens more. The country called on the international community to see the truth and cease its support for the terrorist organization operating under different names.

President Recep Tayyip Erdoğan on Sunday during a press conference ahead of the NATO summit visit said that the terrorist attack on the hospital shows what kind of treacherous and savage terrorist group the YPG is.

In a statement, the Turkish Foreign Ministry "strongly" condemned the attack and its perpetrators.

"The PKK/YPG/SDF, which does not hesitate to target innocent civilians and health care workers who work tirelessly to serve the Syrian people under all conditions, with artillery and missiles, has once again demonstrated its terrorist organization identity and bloody face," the statement said.

"In this respect, we invite the international community to see the truth and to end their support for this terrorist organization operating under different names," it said.

"We reiterate that we will resolutely continue our fight against all terrorist organizations that pose a threat to our national security and Syrian civilians, always and everywhere," it added.

The statement also wished God's mercy on those who lost their lives and a swift recovery to those wounded.

"We know this terrorist organization with such a dark spirit that attacked a hospital in Afrin and killed innocents waiting for healing. I condemn the vile attack of the Syrian branch of the anti-human terrorist organization and wish God's mercy on those who lost their lives and a speedy recovery to the injured," Vice President Fuat Oktay also said on Twitter.

On Twitter, Altun wished God's mercy on those who lost their lives in the "malicious attack" and fast recovery to the wounded.

"The Syrian branch (YPG) of the terrorist group (PKK) showed its brutal face once again. Staying silent in the face of this attack means being complicit in this crime," Kalın said on Twitter.

"The YPG/PKK targeted the Al-Shifaa Hospital in Afrin and caused the death and injury of many of our civilian Syrian brothers, once again showing that it is an anti-human terrorist organization," Çelik said on Twitter.

"We condemn this cowardly attack which targeted innocent civilians and a hospital. Turkey's fight against the PKK and its extensions will continue. A total struggle must be waged against all forms of terrorism, as Turkish President Recep Tayyip Erdoğan said," he added.

Çelik also criticized certain countries that claim to support the YPG terrorists in order to eliminate Daesh in the country – an excuse cited by the United States.

He called on these countries to end their support for the terrorist group.

"The targets of the PKK/YPG terrorist organization, which carried out the attack, came under immediate fire. This cowardly attack, which directly targeted innocent civilians, was reported to the Russian Federation," said a ministry statement.

The greatest challenge to Turkey-U.S. relations is not the issue of Ankara’s purchase of the Russian S-400 missile defense system but rather Washington’s support for the PKK terrorist organization’s Syrian wing, the YPG, Turkish Defense Minister Hulusi Akar stated recently.

The YPG attack on the hospital in northwestern Syria killed at least 13 civilian patients and injured more than 27, said officials in southern Turkey.

In a statement, the governor's office in Hatay, just across the border, said that grad missile and artillery shells fired by the YPG terrorist group from the Assad regime-controlled Tal Rifaat region hit the emergency department of the private Al-Shifaa Hospital in the center of the Afrin district.

The governorship is investigating the attack in coordination with local authorities, the statement added.

A war monitor, the Britain-based Syrian Observatory for Human Rights, put the death toll at 18. The discrepancy could not be immediately reconciled.

The Syrian Observatory for Human Rights said a doctor, three hospital staff, two women and two children died at the hospital, which is located in a city held by Turkish-backed opposition groups.

"Most of the victims died in shelling on the hospital," the monitoring group said in a statement, warning the casualty toll could rise further with some of the wounded in critical condition.

The Syrian American Medical Society (SAMS), an aid group that assists health centers in opposition areas, said Al-Shifaa Hospital in the town of Afrin was targeted by two missiles. The attack destroyed the polyclinic department, the emergency and the delivery rooms, the group said.

Two of the 13 people killed were hospital staff and two were ambulance drivers, said SAMS, which supports the hospital. Eleven of its staff were injured. The hospital has been put out of service and patients were evacuated, the group said.

SAMS called for an investigation into the attack on the hospital, one of the largest facilities in northern Syria that offered thousands of medical services each month, including surgeries and maternity wards. The coordinates for the hospital, which is financed by the U.S Agency of International Development and U.N. funds, were shared as part of the U.N.-led deconfliction mechanism, the group said.

In its more than 40-year terror campaign against Turkey, the PKK – listed as a terror organization by Turkey, the U.S. and the EU – has been responsible for the deaths of nearly 40,000 people, including women, children and infants.