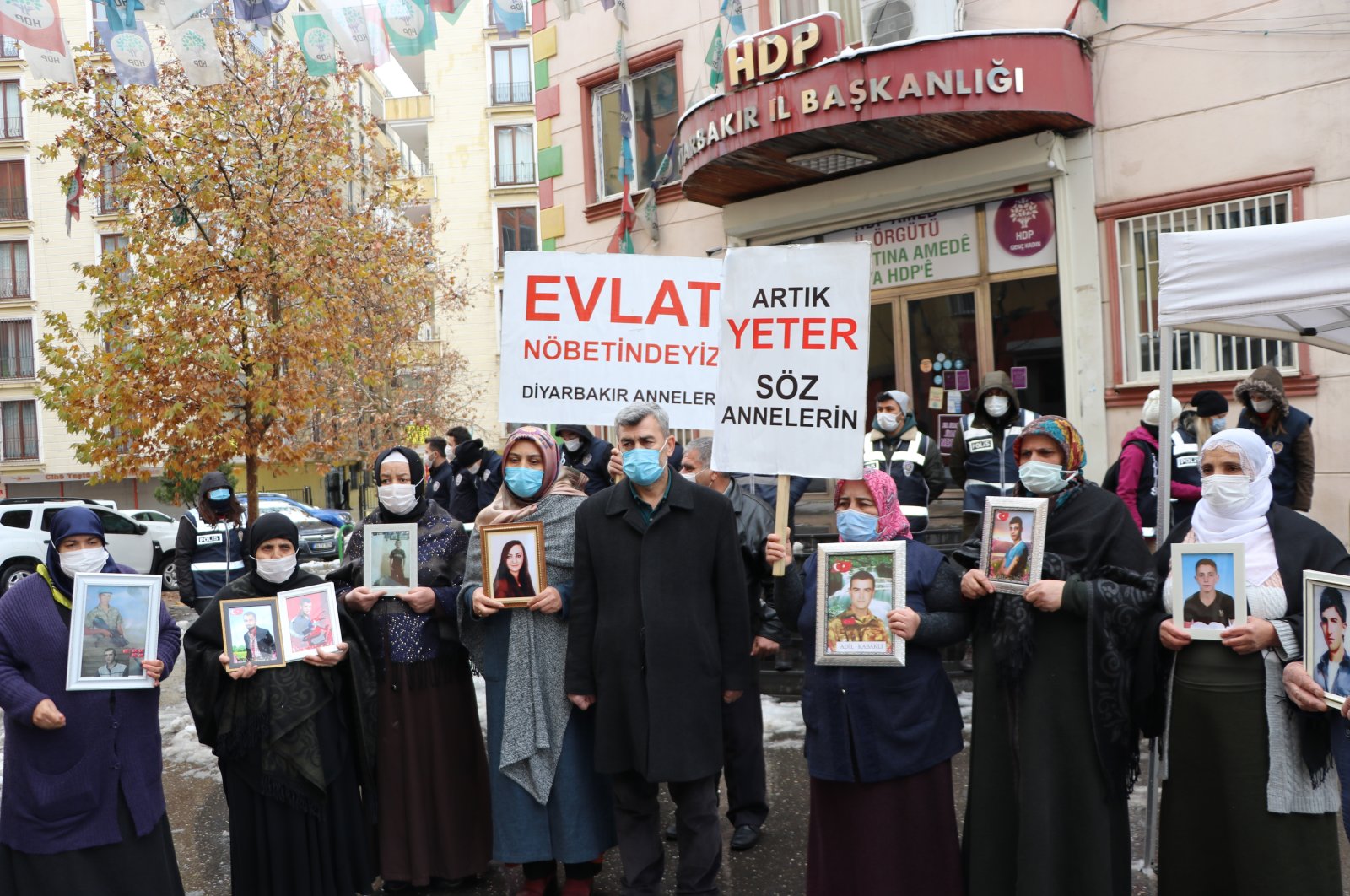 Families holding photos of their children abducted by the PKK terrorist group stand in front of the HDP headquarters in Turkey's Diyarbakır province on Jan. 19, 2021 (AA Photo)
by DAILY SABAH Jan 21, 2021 12:42 pm
Edited By Can Kazancıoğlu
RECOMMENDED

Families protesting the abduction of their children by the PKK terrorist organization in front of the pro-PKK Peoples' Democratic Party (HDP) headquarters in Turkey's southeastern Diyarbakır province slammed a lawmaker for making a provocative gesture Thursday.

HDP Istanbul Deputy Erol Katırcıoğlu flashed a victory sign in response to a parent asking about the whereabouts of their children. Katırcıoğlu was exiting the building on Thursday with Diyarbakır deputies Semra Güzel and Garo Paylan, and Batman lawmaker Necdet Ipekyüz.

The victory sign is often used by supporters of terrorist organizations like the PKK, DHKP-C and others during protests. Katırcıoğlu’s ignorant response to the families' question lead to an uproar, and the police intervened, while one father, Celil Begdaş, fainted during the dispute.

This was not the first standoff between the protesting families and HDP lawmakers.

“You traitor dogs! Are you not fed enough?” Tosun said, calling the peaceful protestors scum.

Meanwhile, one mother, Türkan Mutlu, who has been protesting her daughter Ceylan’s abduction by the PKK, said she has taken a stand against the terrorist group and the HDP for seven years now.

“When they first abducted Ceylan, I came to the HDP’s door and they told me that I should not worry and that Ceylan is working for an honorable cause,” Mutlu said, adding that she still asks that the party facilitate her daughter's return.

“If they had any sense of honor or pride, they would not hold my daughter for a single day,” she said, reiterating that she will continue to protest until her daughter returns.

Several families have been participating in a demonstration in front of the HDP’s main headquarters in Diyarbakır for 507 days now, claiming that the party supports the PKK terrorists recruiting and kidnapping the youth.

The Kurdish families' sit-in began as a reaction to the PKK, the terrorist group that recruited their children, and the HDP, a political party the families argue is allied with the terrorist organization.