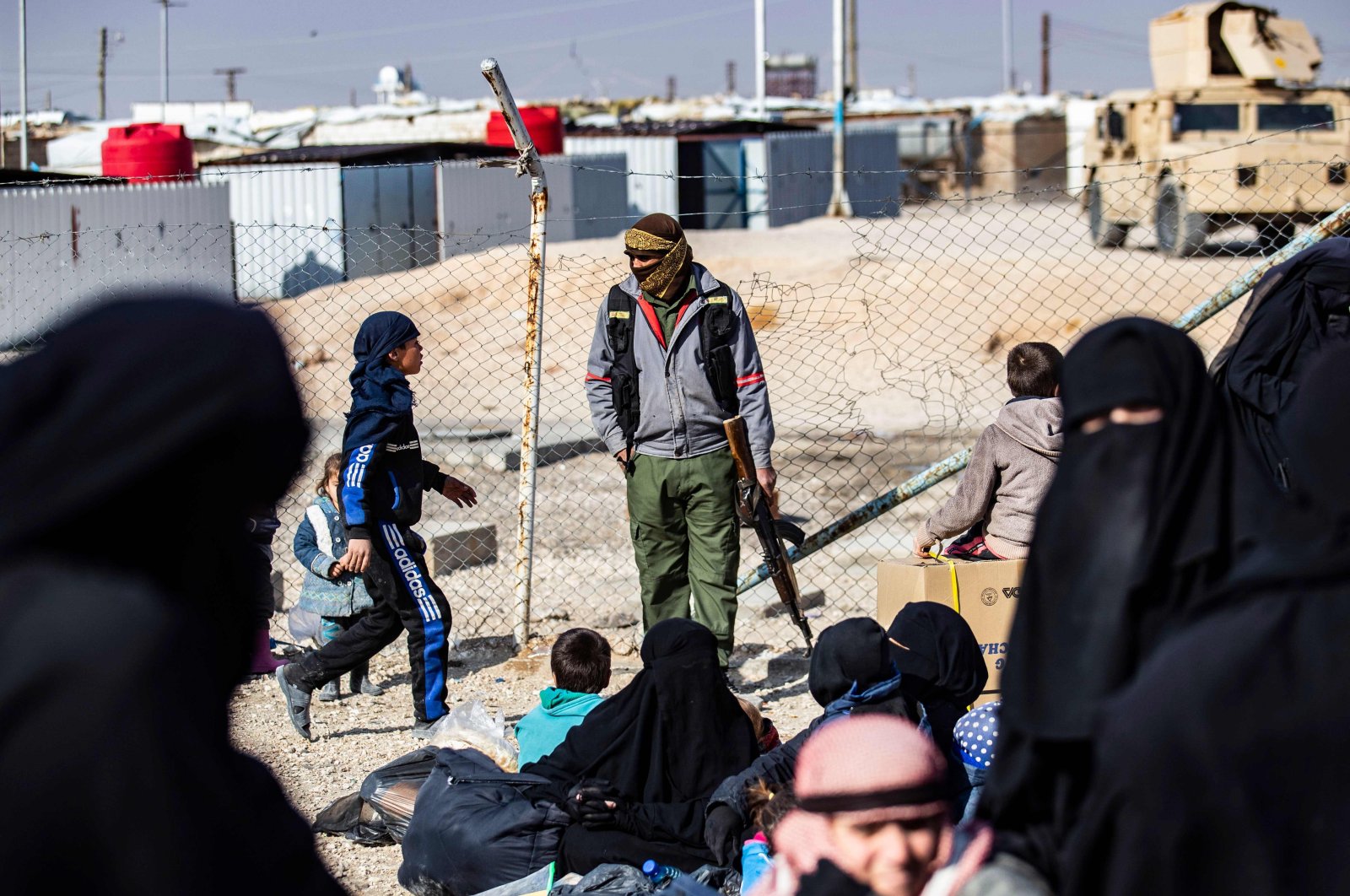 A YPG terrorist group member stands guard as women lead children ahead of departure during the release of another group of Syrian families from the al-Hol camp, which holds suspected relatives of Daesh fighters, in the al-Hasakah governorate, northeastern Syria, Jan. 28, 2021. (AFP Photo)
by DAILY SABAH WITH AA Feb 01, 2021 12:47 pm
RECOMMENDED

More than 400 Turkmen women are being held in the PKK terrorist group’s Syrian branch, the YPG-controlled prisons for Daesh members and their relatives, Iraqi Turkmen Front head Erşat Salihi said Sunday and called on Turkey for them to be rescued.

Releasing a statement, Salihi shared the official documents prepared by Iraqi authorities proving the presence of Turkmen women in the prisons or camps for Daesh members and their relatives.

“Following the correspondence by the Iraq Parliament’s Human Rights Commissions, Iraq’s National Intelligence Service confirmed that more than 400 Turkmen women are being held in Daesh prisons in Raqqa, al-Hasakah and Afrin and also al-Hol camp,” the statement said.

Salihi added that the commission made contact with Turkey’s Foreign Ministry for the rescue of these Turkmen women.

The YPG forces, backed by the U.S-led coalition, declared a military victory against Daesh in March 2019 after seizing control of the last sliver of land the militants had controlled in southeast Syria. The Daesh terrorist group has resorted to guerrilla attacks since losing its last significant piece of territory in Syria.

Forces led by YPG terrorists run more than two dozen detention facilities, scattered around northeastern Syria, holding about 10,000 Daesh fighters. Among the detainees are some 2,000 foreigners, including about 800 Europeans.

Families of Daesh militants and supporters who came out of the last territory controlled by the group are also holed in camps around the YPG-controlled areas. The largest one, al-Hol, hosts more than 60,000 people, including 24,300 Syrians that were either captured or displaced by fighting to expel Daesh from its last scrap of Syrian territory almost two years ago, according to the United Nations Office for the Coordination of Humanitarian Affairs (OCHA).

Several human rights organizations along with the U.N. have repeatedly warned that conditions in the al-Hol camp are worsening each day and have demanded access to the centers where the families of former Daesh members are being held. Iraqis make up the bulk of foreigners in al-Hol, which also holds alleged Daesh relatives from around 50 countries, including Western nations. Foreign governments have been hesitant to repatriate their citizens being held in al-Hol.

In recent months, more than 500 Syrians, some related to alleged Daesh members, were released by the YPG terrorist group from the overcrowded al-Hol camp. The YPG also this month released 40 more Daesh terrorists from prisons in Syria's northeastern al-Hasakah province after regional Arab tribes stood as guarantors, according to local sources.