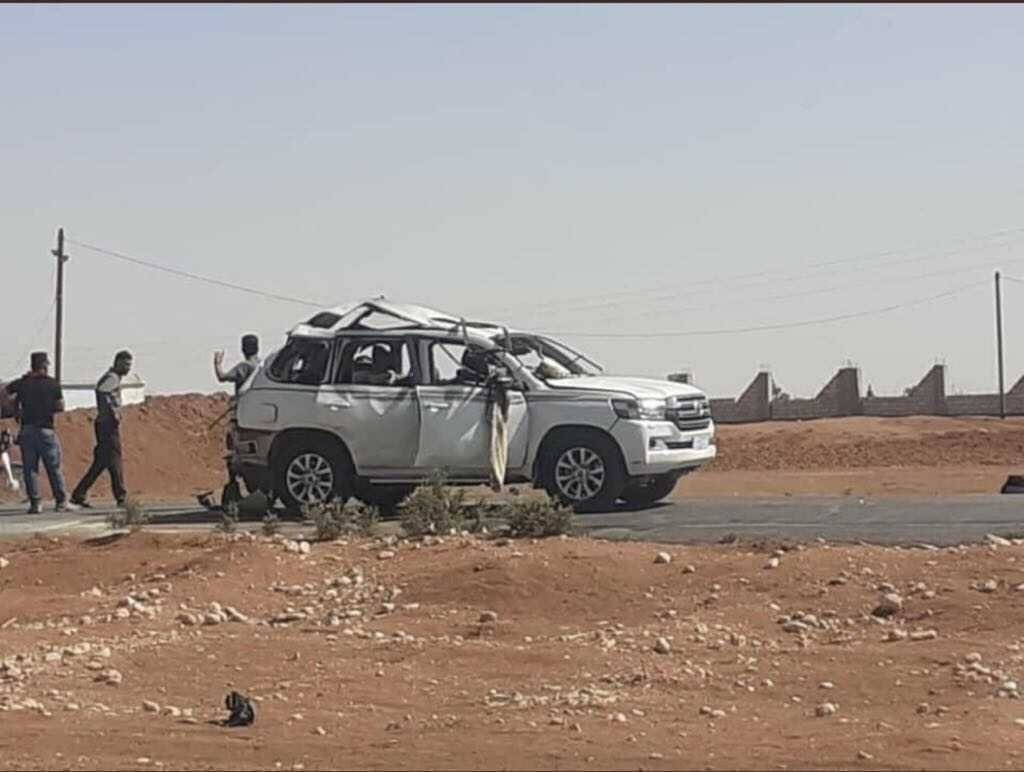 The car carrying a senior PKK terrorist was targeted during a Turkish operation in Qamishli, northeastern Syria, Sept. 28, 2021. (AA Photo)
by DAILY SABAH Sep 28, 2021 9:58 am
RECOMMENDED

In a cross-border counterterrorism operation jointly carried out by Turkish security forces and the National Intelligence Organization (MIT), a senior PKK terrorist figure classified under the Red Notice category on Interpol's wanted terrorists list was eliminated in northeastern Syria's Qamishli.

Karaaslan, who joined the PKK in the 1980s, received personal training from the group’s jailed leader Abdullah Öcalan in the Syrian capital Damascus in the 1990s, took on responsibilities as the PKK Armenia Representative in the 2000s and served as a member of the group’s so-called court of justice.

Karaaslan, who has been in Syria since 2019, was the PKK’s Syrian Secretariat member and PKK’s Syria general health officer.

During his time in the organization, Karaaslan was known to be a senior executive in the armed field and who personally planned many actions in eastern Turkey's Tunceli, Amanos and northern Iraq's main PKK base Qandil.

Karaaslan, who was known to be operating based in Syria’s Qamishli, was targeted with a drone operation in the Eli Fero location on the Qamishli-Hassakeh main road.

It was learned that the loss of Karaaslan sent shockwaves through the senior figures of the terrorist group and that this situation was hidden from the lower cadres in order to not demoralize them.

Karaaslan is the highest level terrorist in Syria to have been eliminated so far.

Among the terrorists eliminated this year were a number of senior PKK members.

Süleyman Öztürk, codenamed Cilo, was targeted in an air-backed operation by local gendarmerie teams in the southeastern Mardin province. He was on Turkey’s wanted terrorist list.

Süheyla Çelik, codenamed Nuda Sason, was killed in the eastern Van province during a reconnaissance and surveillance mission of the special operations police. Çelik was the head of the terrorist group in the eastern Tendürek region.

Haldun Altay, another terrorist killed, was among the perpetrators of the attack that killed a police officer in the eastern Ağrı province on May 13.

Hasan Said Hasan, the so-called head of the PKK branch operating in Sinjar, Iraq, was killed in an operation jointly conducted by the MIT.

Hasan was found to have been organizing the transfer of PKK terrorists between Syria and Iraq, as well as the arms and ammunition shipments of the terrorist group.

Furthermore, he was working on the recruitment of young Yazidi people for the PKK terrorist group. Hasan was a member of the so-called executive council of the PKK and was on Iraq's wanted list for his separatist activities.

Turkey launched Operations Claw-Lightning and Claw-Thunderbolt on April 23 in northern Iraq’s Metina and Avashin-Basyan regions near its borders. The PKK are being heavily targeted in the Metina, Avashin-Basyan, Zap and Qandil regions in northern Iraq. In addition to F-16 fighter jets, the operations are being supported by border artillery units, fire support elements in forward base areas and attack helicopters.

In mid-2014, the PKK also managed to establish a foothold in Sinjar on the pretext that it was protecting the local Yazidi community from Daesh. Since then, the PKK has reportedly established Sinjar as a base for its logistical and command and control activities. Iraq’s Kurdish Regional Government (KRG) previously said that the PKK’s presence in Sinjar is unacceptable and called for the terrorists to leave the area.