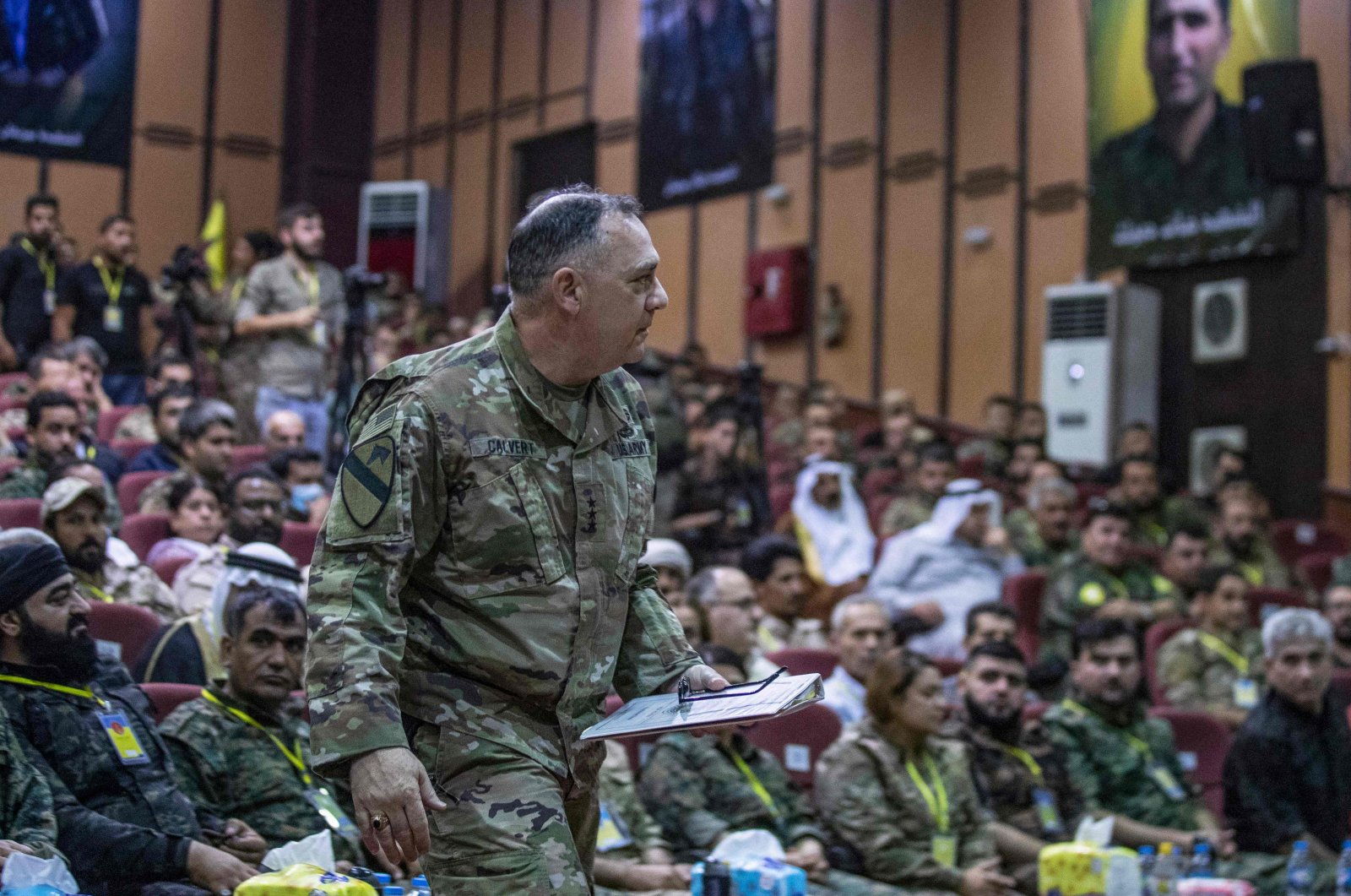 A top U.S. general attended the so-called annual meeting of the Syrian Democratic Forces (SDF), an umbrella group dominated by the terrorist PKK’s Syrian offshoot, the YPG, in northern Syria's Hassakeh on Sunday.

Lt. General Paul T. Calvert, who serves as the Commander of the Combined Joint Task Force – Operation Inherent Resolve, attended the meeting of the terrorists.

The notorious leader of the YPG, Ferhat Abdi Şahin, code-named Mazloum Kobani, made the opening speech at the meeting, reports said. The U.S.-backed SDF is a rebranded version of the YPG with which the U.S. has partnered under the pretext of fighting Daesh.

The U.S. primarily partnered with the YPG in northeastern Syria to fight the Daesh terrorist group. Turkey strongly opposed the terrorist group’s presence in northern Syria and the formation of a terror corridor, which has been a major sticking point in strained Turkey-U.S. relations. Ankara has long objected to the U.S.' support of the YPG, a group that poses a threat to Turkey and terrorizes local people, destroying homes and forcing people to flee. While underlining that a country cannot support one terrorist group to fight another, Turkey conducted its own counterterrorism operations, over the course of which it has managed to remove a significant number of terrorists from the region.

Under the pretext of fighting Daesh, the U.S. has provided military training and given truckloads of military support to the YPG, despite its NATO ally’s security concerns. The U.S. has a total of 11 bases in the provinces of Hassakeh, Raqqa and Deir el-Zour, which are currently under the control of the YPG. Interpol currently has a Red Notice warrant out in Şahin’s name for playing a crucial leadership role in the YPG. He is the adopted son of the PKK’s imprisoned founder Abdullah Öcalan, who is now serving a life sentence in a Turkish prison. Şahin had been invited by White House officials to Washington, despite the fact that he is a wanted terrorist. Turkish officials have criticized the U.S. for delays and inconsistencies in their pledges to cooperate against the YPG.

In February, Şahin stated that the YPG will prepare a “joint program” with the administration of newly elected U.S. President Joe Biden, signaling that Washington is eager to continue its trend of supporting terrorist forces in the region.

Şahin is also sought by the Turkish Interior Ministry with a red notice. The ministry divides its "wanted" list into five color-coded categories, with red marking the most wanted and dangerous. The ranking is followed by blue, green, orange and gray, depending on the sensitivity of the suspect's criminal activity. The terrorist leader's involvement in the PKK goes back to 1996, when he engaged in militant activity in Turkey's southeastern Hakkari province.

The PKK – listed as a terrorist organization by Turkey, the U.S. and the European Union – has waged a terror campaign against Turkey for more than 40 years and has been responsible for the deaths of nearly 40,000 people, including women and children.