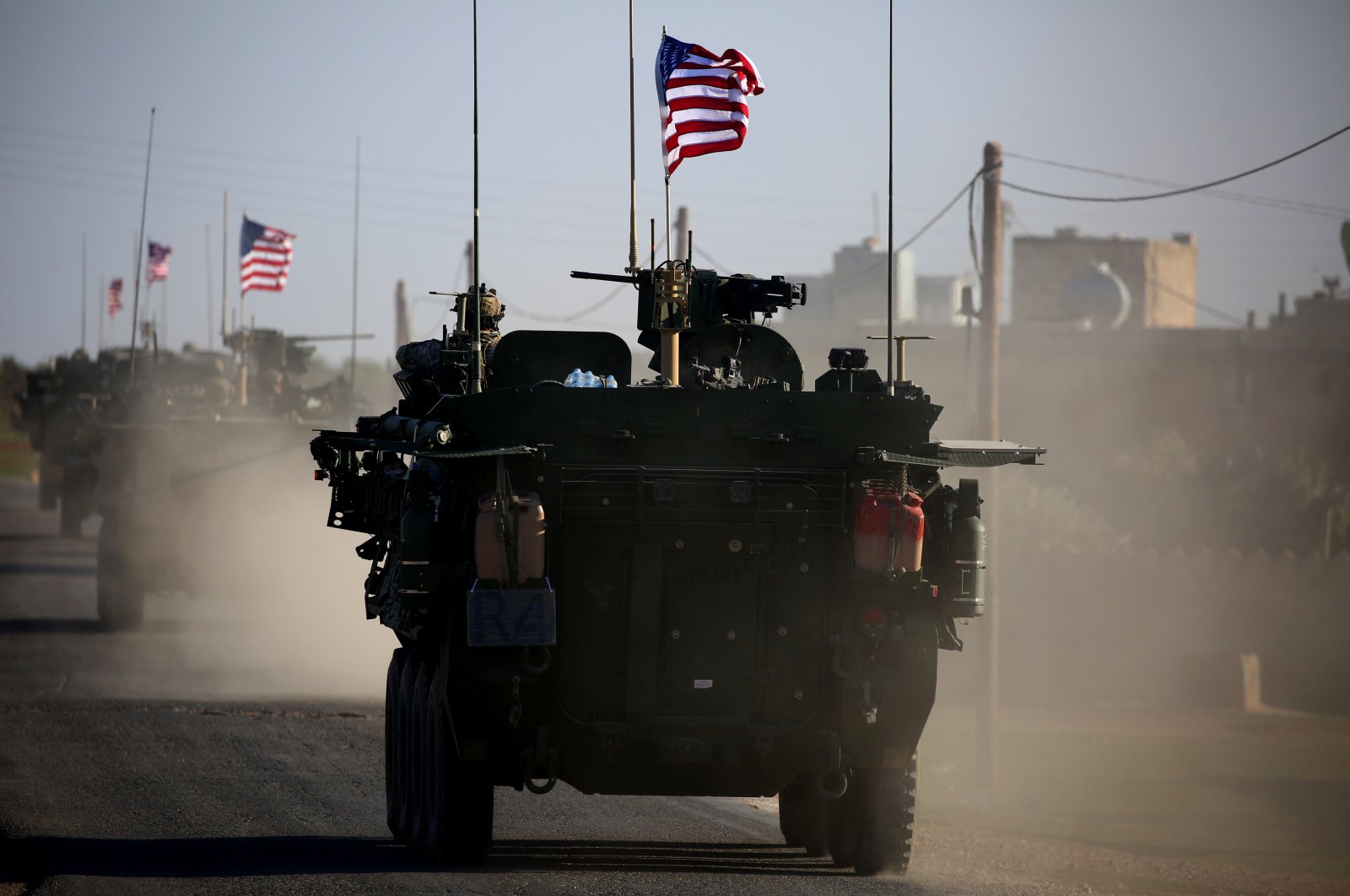 A convoy of U.S. forces armored vehicles drives near the village of Yalanli, on the western outskirts of the northern Syrian city of Manbij, on March 5, 2017. (AFP File Photo)
by DAILY SABAH Feb 01, 2021 12:34 pm

The PKK’s Syrian offshoot, the YPG terrorist group, is preparing a program with the newly elected Biden administration in the U.S., according to Ferhat Abdi Şahin code-named Mazloum Kobani, one of Turkey’s most wanted terrorists, who is also sought with a Red Notice

The PKK's Syrian offshoot, the YPG terrorist group, will prepare a “joint program” with the administration of newly elected U.S. President Joe Biden, according to a statement by a terrorist ringleader, signaling that Washington is eager to continue its trend of supporting terrorist forces in the region.

The terrorist leader Ferhat Abdi Şahin, code-named Mazloum Kobani, said during an interview with the United Arab Emirates (UAE)-based Al Arabiya-linked Al-Hadath TV that they will prepare a program but did not provide details on its content or which U.S. officials they spoke with.

Şahin, a notorious terrorist on Turkey’s most wanted terrorists list, said the election of Biden gives him “more hope to find a realistic solution to the Syrian crisis.” He also noted that they continue to coordinate with Russia and that it is necessary to always keep a balance in their relations with Washington and Moscow.

Experts have noted that relations between Turkey and the U.S. can only improve if the Biden administration shifts its YPG policy in Syria.

For instance, previously, Hüseyin Alptekin, a researcher at the Foundation for Political, Economic and Social Research (SETA), stated that the most important issue in Turkey-U.S. relations is whether Biden will insist on the YPG corridor in Syria that was initiated during the Obama administration when Biden was vice president. He pointed out that such a move would be met with resistance from Turkey and could eventually cause a break in ties.

Obaida Hitto, TRT World’s Syria correspondent, claimed that the U.S. support for the YPG would increase during the Biden era. He also stated that for a political solution in Syria, Biden is likely to gather an international group, including the Assad regime, in the upcoming period.

President Recep Tayyip Erdoğan has been underlining that there were three main outstanding issues between Ankara and Washington, namely the U.S.' support for the YPG, which dates back to the Obama administration; its complacency toward the Gülenist Terror Group (FETÖ) and the F-35 embargo against Turkey.

Recently, the Biden administration announced that Brett McGurk, who was the U.S. special envoy during the Obama era and shaped Washington’s relations with the YPG, would become the coordinator for the Middle East and North Africa. McGurk was especially criticized by Turkish officials for supporting the terrorist group in Syria and posing in photographs with YPG ringleaders like Şahin.

The U.S. has a total of 11 bases in the provinces of Hassakeh, Raqqa and Deir el-Zour, which are currently under the control of the YPG.

Interpol currently has a Red Notice warrant out in Şahin’s name for playing a crucial leadership role in the YPG.

Şahin was invited by White House officials to Washington, despite the fact that he is a wanted terrorist. Turkish officials have criticized the U.S. for delays and inconsistencies in their pledges to cooperate against YPG.

On Aug. 7, 2019, Turkish and U.S. military officials agreed to set up a safe zone and develop a peace corridor running from the Euphrates to the Iraqi border to facilitate the return of displaced Syrians who are currently living in Turkey to their home country and to provide security for the Turkish border settlements and military outposts. They also agreed to establish a joint operations center. The agreement envisaged the establishment of measures necessary to address Turkey’s security concerns, including clearing the zone of the PKK and YPG.

However, the process was sluggish, and Washington kept stalling on its promises, despite Turkey’s repeated warnings. Turkey has long decried the threat from terrorists east of the Euphrates in northern Syria, pledging military action to prevent the formation of a “terrorist corridor” there. Yet, when the given promises were not upheld, Turkey started its own unilateral plan to end terrorism in the region.

Turkey launched Operation Peace Spring on Oct. 9, 2019, to eliminate YPG terrorists from the area east of the Euphrates in northern Syria in order to secure Turkey’s borders, aid in the safe return of Syrian refugees and ensure Syria’s territorial integrity.

While Turkey was preparing to launch its operation, U.S. President Donald Trump announced his decision to withdraw U.S. troops from the region, leaving YPG terrorists without their powerful backer, despite objections from the terrorist group.

As part of two separate deals with the U.S. and Russia, Turkey paused the operation to allow the withdrawal of YPG terrorists from the planned northern Syria safe zone.

The PKK, which is listed as a terrorist organization by Turkey, the U.S. and the European Union, has waged a terror campaign against Turkey for more than 40 years and has been responsible for the deaths of nearly 40,000 people, including women and children.