Turkey will do whatever necessary against YPG terror: Akar 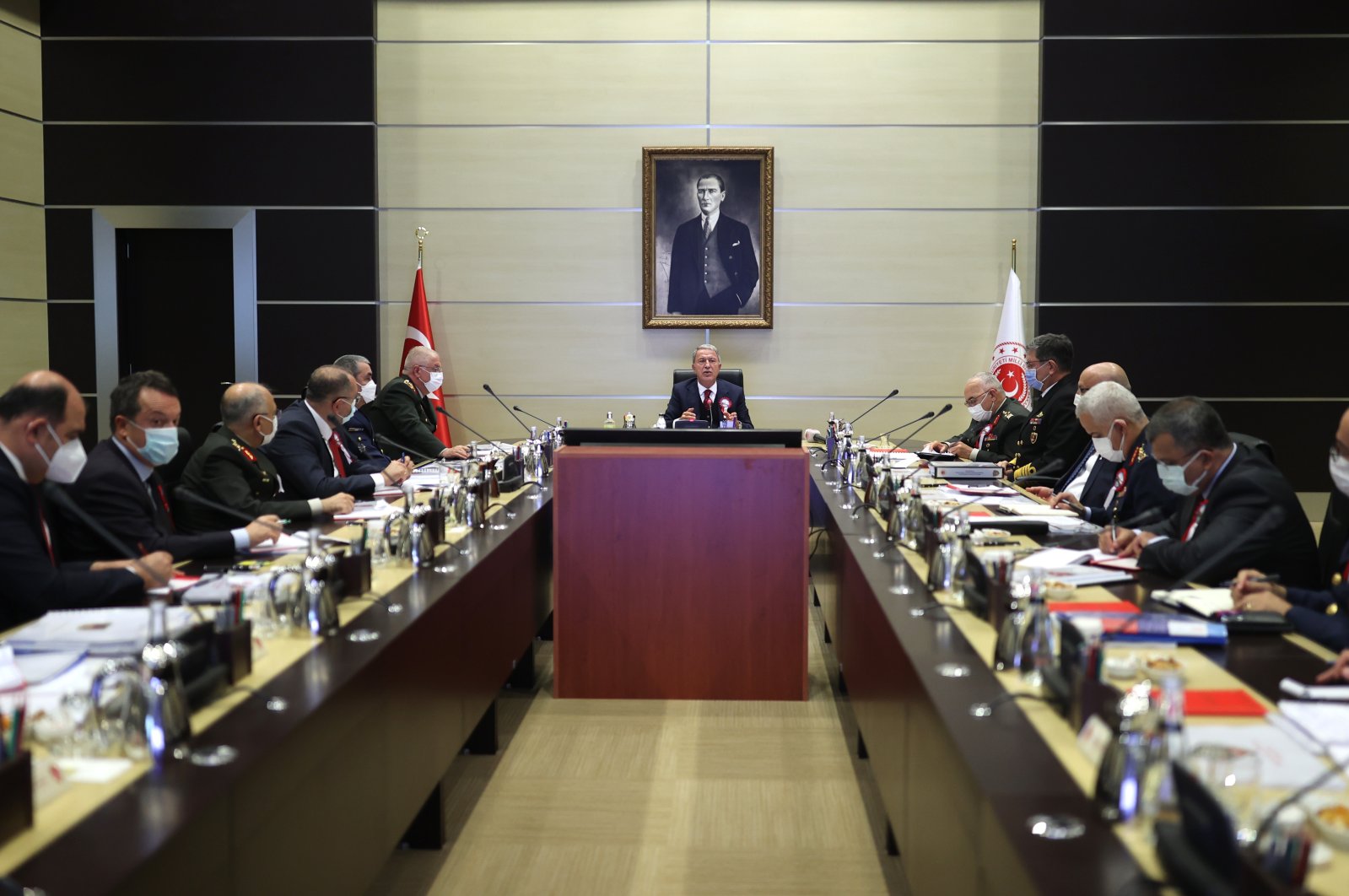 Turkey will do whatever is necessary in order to protect its rights and interests against the attacks carried out by the PKK terrorist group's Syrian branch YPG from northern Syria, Defense Minister Hulusi Akar said Thursday.

Akar attended the opening ceremony of the National Defense University for the 2021-2022 academic year. He held an evaluation meeting with the administrative and military management staff of the university on military and academic education and training activities. Speaking there, Akar said: "Whatever needs to be done to protect our rights and interests will be done in the same way when the time and place comes, as has been done under the leadership of our President. Let no one doubt that."

Underlining the agreements made with the United States and Russia regarding northern Syria, Akar said: "As Turkey, we take our part in the agreements seriously and implement them carefully. We fulfill our responsibilities there. Likewise, we do what we have to do within the framework of international law, in good neighborly relations in the Aegean, Eastern Mediterranean and Cyprus. We are committed to peace and dialogue. We are in favor of talking and meeting. On the other hand, we said that we will not allow any fait accompli, and we continue to say it. We are determined and capable of this."

Foreign Minister Mevlüt Çavuşoğlu said Wednesday that the United States and Russia are responsible in part for the attacks carried out in northern Syria by the YPG, adding that the two countries did not keep their promises.

Çavuşoğlu reiterated that Turkey will do what is necessary to eliminate terrorists from northern Syria, referring to the YPG, which repeatedly targets Turkish forces in the region.

"Russia and the United States are also responsible for YPG/PKK attacks on Turkey," the minister said adding that the two countries had not kept their promises to ensure the YPG withdraw from the Syrian border area. Ankara, following military operations in Syria, reached agreements with Moscow and Washington, who assured they would push terrorist elements 30 kilometers(18.6 miles) to the south, away from the Turkish borderline, he added.

"Now that they did not keep their word, the terrorists still have a presence there and have intensified attacks (on Turkey), what we need is to pull ourselves up by our bootstraps," the minister said, referring to Turkey's readiness to take initiative if need be, as seen in previous military campaigns in the region.

Two Turkish police officers were killed and two others wounded as a result of the YPG attack in Azaz, northern Syria, the Interior Ministry said Sunday. The YPG/PKK terrorists attacked an armored vehicle with a guided missile in the Operation Euphrates Shield area, the ministry said. The attack was launched from the Tal Rifaat region, it said.

Azaz and Jarablus have been under the control of Turkey-backed opposition groups since Ankara's first operation into Syria in 2016. The operation aimed to drive away Daesh and YPG terrorists from its border with the country. Ankara has launched two other cross-border operations in Syria against the YPG, one of which targeted the Afrin region.

Akar also stated that Turkey respects the borders and sovereignty rights of all its neighbors. "On the other hand, it is our duty to protect our country. If there are terrorists there, if you can't take any action against them, we have to. Hopefully, we are determined to save our country and nation from this terror scourge that has been going on for 40 years. On the other hand, if you come from thousands of kilometers to our south and say that some actions threaten your security, we will remain indifferent to the formations near our borders. Such a thing is unthinkable. We did not and will not allow the creation of a terror corridor there in any way," he added.

Stating that a new process has been started in the fight against terrorism as of July 24, 2015, and that terrorists have been eliminated at their source within the scope of the new concept, Akar said: "Wherever the terrorist is, that is our target."

Using the phrase "PKK equals YPG" and emphasizing that the only target of the Turkish Armed Forces (TSK) is terrorists, Akar said: "Within the scope of the intense fight against terrorism, which started on July 24, 2015, 18,609 terrorists have been neutralized so far. As of Jan. 1, the number of terrorists neutralized has reached 2,201."

President Recep Tayyip Erdoğan said Monday that Turkey was determined to eliminate threats originating in northern Syria, and added that the YPG killing two Turkish police officers in a terrorist attack was "the final straw."

"We have no patience left regarding some regions in Syria that have the potential to be used for attacks on our country," Erdoğan said in a news conference following a Cabinet meeting.

Ankara has long objected to U.S. support for the YPG, a group that poses a threat to Turkey and terrorizes local people, destroying their homes and forcing them to flee. Under the pretext of fighting Daesh, the U.S. has provided military training and given truckloads of military support to the YPG, despite its NATO ally's security concerns. Underlining that one cannot support one terrorist group to defeat another, Turkey conducted its own counterterrorism operations, over the course of which it has managed to remove a significant number of terrorists from the region.

While Erdoğan recently urged Russia to ensure the YPG/PKK terrorists withdraw from the area as part of a previous deal, Turkish officials note that Moscow has failed to follow through on its promises to control the terrorist organization in Syria as the YPG/PKK continues to launch attacks in the safe zones developed by the Syrian National Army (SNA) with the support of Turkey. YPG's political branch also has an office in Moscow.