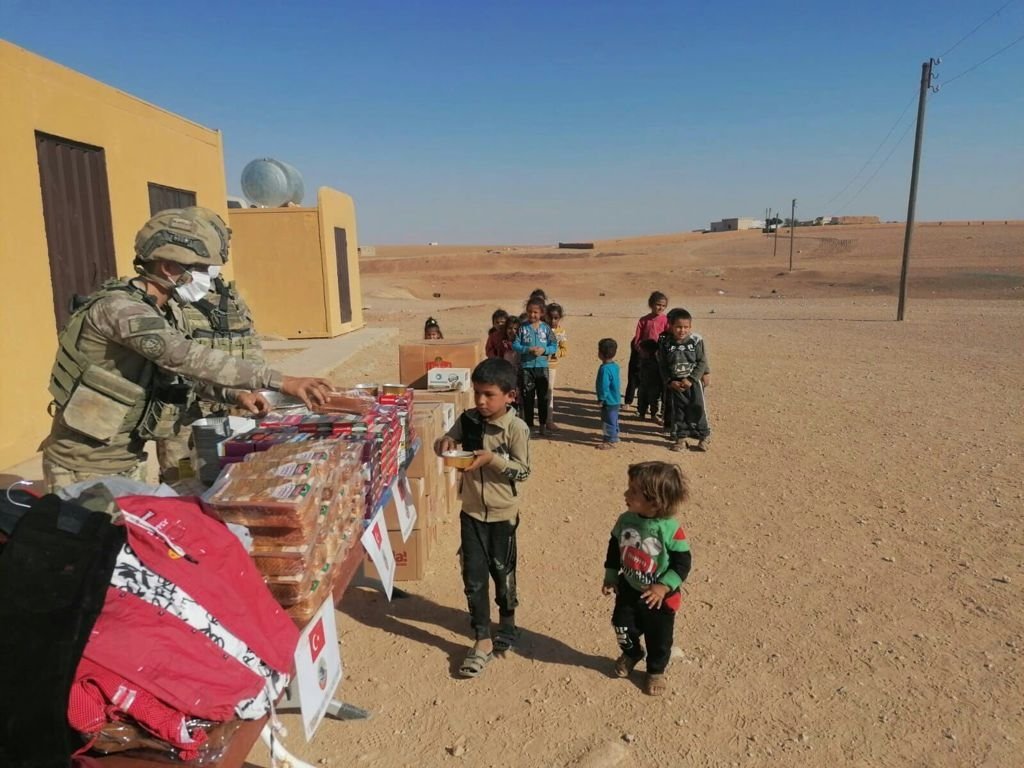 Turkish soldiers, who have been fighting against terrorist organizations with determination for the peace and security of our country and Syria by preventing a terror corridor from being established south of our borders, have been extending the helping hand of our country to the region, Turkey's Defense Ministry said in a statement Sunday.

Emphasizing their coordinated efforts with other state agencies in order to provide the normalization of daily life in the region, the ministry said: "Our Turkish Armed Forces (TSK), which continues its aid, infrastructure and daily life support activities uninterruptedly, continue to be a beacon of hope for peace and stability by meeting the basic and humanitarian needs of people in the Peace Spring region: from eating and drinking to clothing, from electricity to water, from health to education."

Turkish soldiers "will continue to target wherever the terrorist is, to extend a helping hand wherever the innocent and oppressed are, and to set an example to the whole world with their mercy as well as their heroism, with determination, as they have done so far," it added.

The operation, conducted in line with Turkey's right to self-defense borne out of international law and United Nations Security Council resolutions, aimed to establish a terror-free safe zone for the return of Syrians in the area east of the Euphrates River that was then controlled by United States-backed YPG terrorists, which is the Syrian branch of the PKK terrorist group.

Since the launch of the operation, Turkey has been supporting every aspect of life in the region, from health to education, security to agriculture. In this respect, efforts to clear bombs and improvised explosive devices were launched and administrative responsibilities were delegated to local councils.

The country also rolled up its sleeves to reconstruct hospitals, schools, mosques and roads destroyed by the YPG/PKK. Within the scope of ameliorating the region's social infrastructure, people were provided with food and clothing by several nongovernmental organizations (NGOs), while roads and buildings were rebuilt. These efforts paid off as hundreds of displaced Syrians started to return to the liberated areas.