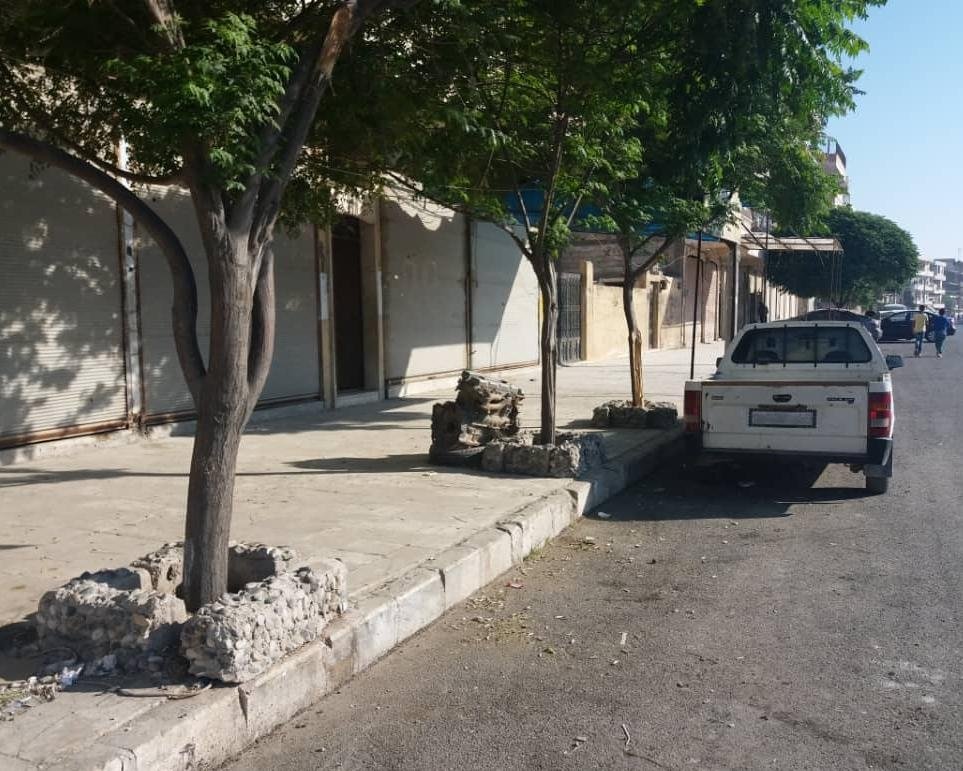 Terrorists linked to the YPG, the PKK terrorist group's Syrian branch, intimidate Arabs living in regions they occupy in northeastern Syria, where they raid their houses and detain and forcibly recruit them, the Anadolu Agency (AA) reported.

Further, they say, the United States-backed terrorist group continues to oppress people in Deir el-Zour and Raqqa who protest fuel price hikes and cuts in income from agricultural products.

Speaking in the video, a woman says: "This is the living room. Look, they deliberately broke them. They broke the windows with their guns. They wanted to kill us."

Meanwhile, YPG terrorists reportedly detained some 12 women and children during a raid on the village of Kherbet Bakar, west of Raqqa.

They also recruited 70 young people in eight villages in Deir el-Zour and 24 others in Raqqa.

The young recruits were transferred to camps established by the YPG for armed training.

In addition, two civilians were injured when terrorists opened fire on a house in Kherbet Bakar where a young man, who fled forced recruitment in Raqqa, took shelter.

Separately, four civilians were injured when terrorists opened fire on people protesting against forced recruitment in Manbij, Aleppo. Some of the injured people are in critical condition.

Local residents, angered by new higher prices imposed by the YPG in areas under their occupation, took to the streets earlier this month in many parts of northeastern Syria. Tensions between the locals and the terrorists continue to escalate, particularly in Syria's Deir el-Zour and Hassakeh provinces and the surrounding areas.

Northeastern Syria is the center of what remains of Syria’s oil industry. It is in shambles but remains one of the main sources of revenues for the YPG-led so-called autonomous administration there. The region is controlled by the YPG, which Turkey designates as a terrorist group.

About 70% of Syria's oil resources lie within the territories currently occupied by the YPG, with the support of the United States. The terrorist organization holds the eastern part of Deir el-Zour province, located near the Iraqi border, which is one of Syria's largest energy sources.

There are 11 large oil fields on the eastern side of the Euphrates, which cuts the province into two. These oil fields make up around one-third of the energy sources in Syria.

YPG terrorists control some of Syria's largest gas and oil fields but are not producing enough oil and gas to meet demand. Having seized most of Syria's energy resources, the YPG terrorist group has also forcibly and disproportionately raised fuel prices.

Faced with the hike amid their limited purchasing power, residents in northern Syria are now pouring out into the streets. The price hikes come on top of an accelerating economic crisis that has weakened the value of the Syrian pound and plunged wide segments of Syria's population into poverty. Heating fuel, petrol and cooking gas have been in short supply in recent months and motorists have grown used to waiting in long queues to fill up.

YPG oppression also continues in the other parts of northern Syria occupied by the terrorist group. Syria's interim government on Tuesday called on the international community to protect civilians in the Manbij district of Aleppo province after YPG terrorists opened fire on protestors.

In a written statement, the interim government condemned the YPG for opening fire on peaceful demonstrators, saying, "The United Nations and other countries must do their part to immediately protect people in Manbij and to put an end to the SDF's acts of forcibly recruiting young people in defiance of international law."

The YPG terrorist group uses the acronym SDF, which comprises Kurdish and Arab fighters battling Daesh, as a cover for receiving international support.

Hundreds of people in Manbij, where Arabs make up 90% of the population, gathered on Monday to protest the YPG's detaining of children for armed training.

One civilian was killed and three others were injured when terrorists opened fire on people protesting against the forced recruitments.

After the incident, the angry crowd in the district center captured and set to fire the YPG terror group's checkpoint on the Aleppo Road, and observed a shutter down strike during the day.

In an attempt to prevent people from protesting against forced recruitments, the YPG imposed a so-called 48-hour 'curfew' in Manbij.

The YPG imposes "compulsory military service" on women and men born between 1990 and 2003. The terrorist organization forcibly recruits Arab children and youth in areas that include Manbij, Ain al-Arab (Kobani), Qamishli, Hassakeh, Raqqa and Deir el-Zour, according to AA.

Documenting the violations against civilians in Syria, the Syrian Network for Human Rights (SNHR) in its report released on May 22 said that nearly 3,800 civilians are being forcibly held in detention centers established by YPG-led groups.

The U.S.-backed YPG made it to Manbij in August 2016 after ousting Daesh terrorists who had captured the city from the moderate opposition in January 2014. Before the YPG, Manbij was administered by the Revolution Assembly, which represented 17 different groups and tribes.

To assuage the security concerns of Turkey, Washington and Ankara reached the "Manbij Agreement" in June 2018, which focuses on the withdrawal of YPG terrorists from Manbij to stabilize the region. The deal presented a three-stage process to be realized within 90 days – the withdrawal of the terrorist organization, joint Turkish-American patrols, which began in November 2018, and the establishment of a new local administration made up of people who reflect the ethnic composition of the area. However, Washington has long been dragging its feet on the implementation of the Manbij deal.

Most recently, the U.S. Defense Department has requested over $500 million in aid to be distributed to various organizations, including the YPG terrorist group.