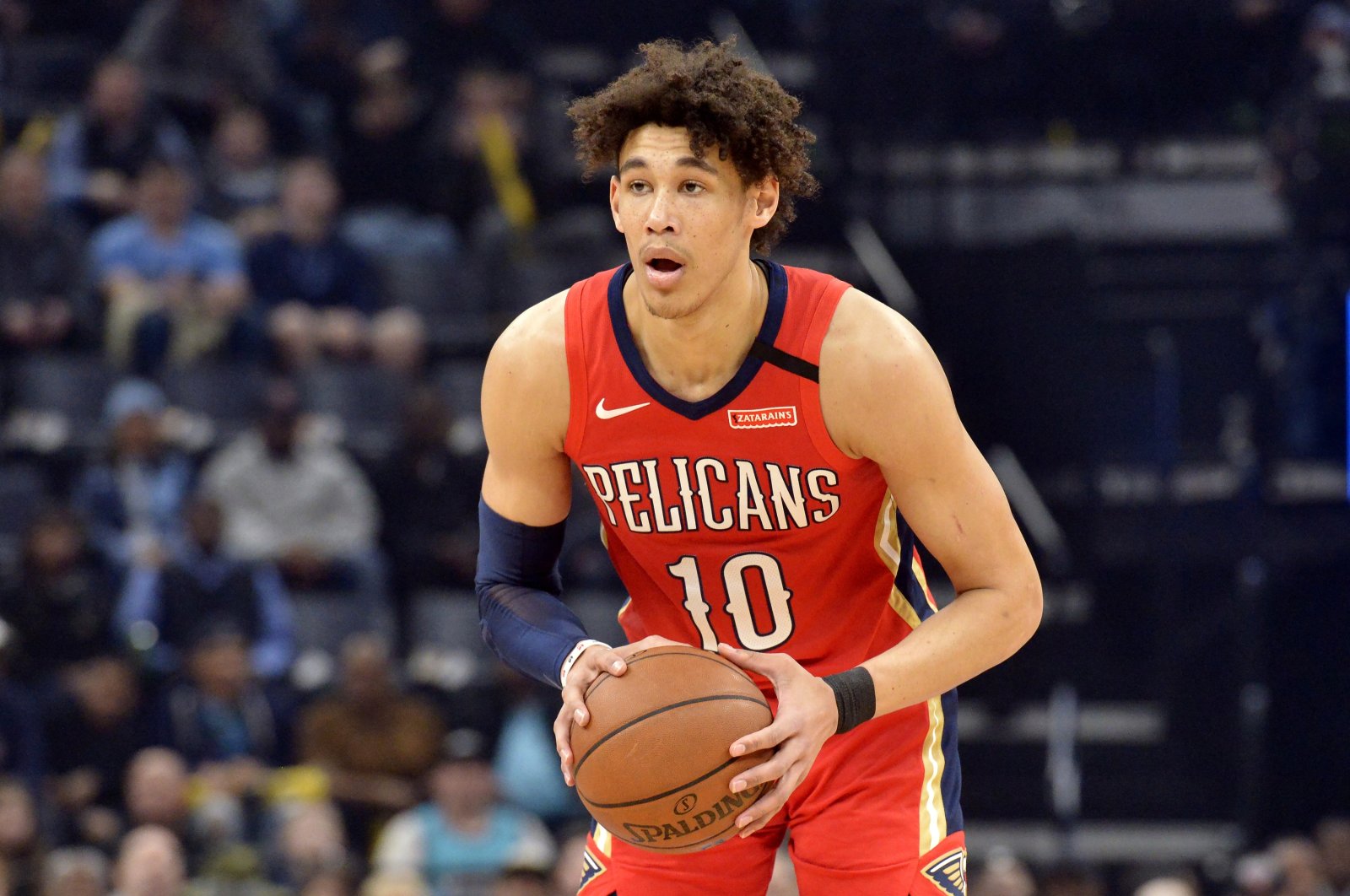 Police body camera footage of the arrest of an NBA player shows that while some lessons may have been learned from the tragic death of George Floyd, appropriate use of force is still seemingly a tricky concept.

A Los Angeles police officer briefly pressed a knee to the neck of NBA player Jaxson Hayes as the New Orleans Pelicans center gasped “I can’t breathe” seconds before another officer used a Taser on him during a struggle, according to body camera video released Friday.

The officers went to Hayes’ home in the Woodland Hills neighborhood on July 28 around 3 a.m. after his girlfriend’s cousin called 911. The cousin said Hayes’ girlfriend was sending her text messages saying he had become loud and violent and she was scared.

Hayes, who was not armed, became argumentative after officers said he couldn't go back into his home. He ignored requests from his girlfriend and his cousin to stop talking and struggling with the police as they tried to subdue him. The 21-year-old ultimately was booked into jail on accusations of resisting arrest after he was evaluated at a hospital for minor injuries.

“Jaxson Hayes is a nice young man, and he is back home in Ohio working out and getting ready for the upcoming season,” his attorney, Mark Baute, said in a statement Friday. Hayes played his high school basketball for Cincinnati Moeller, which has many notable alumni not only in the sporting world, including baseball legend Ken Griffey Jr., but also counts former Speaker of the U.S. House of Representatives John Boehner among its graduates.

The LAPD’s Force Investigation Division is looking into the case “due to the possibility of force being applied to Hayes’ neck during the use of force,” police previously said in a statement. Los Angeles police have presented the case to prosecutors, who haven’t decided whether to file charges.

A police officer’s elbow was injured when Hayes shoved him into a wall. Authorities previously said Hayes’ girlfriend has declined to cooperate in the investigation.

Hayes, 6-foot-11 and 220 pounds (over 2 meters and nearly 100 kilograms), was drafted eighth overall out of Texas in 2019. He is the son of former NFL tight end Jonathan Hayes, who played for Kansas City and Pittsburgh. The younger Hayes played one season for the Longhorns before turning pro. In his first two NBA seasons, he averaged 7.4 points, 4.2 rebounds and 16.5 minutes.

Since George Floyd’s death in 2020 there is heightened sensitivity not just when it comes to police violence against black people, but to police using any kind of force that restricts a person’s breathing. While Hayes’ encounter with police bears some similarities to Floyd’s murder by former Minneapolis police officer Derek Chauvin, the differences are notable.

Hayes was on his back when a Los Angeles police officer’s knee was pressed to his neck for a few seconds. Floyd was pinned face-down under Chauvin’s knee for up to 9 1/2 minutes.

As Hayes gasped “I can’t breathe” several times, another officer tells his partner “get your knee up.” That officer immediately complies and Hayes is able to lift his head.

In Floyd’s case, three other officers were charged with aiding and abetting Chauvin with murder and manslaughter because they did not intervene.

The nearly 15-minute, edited video of Hayes’ arrest includes the 911 call and footage from multiple officers’ body cameras. The incident at Hayes’ home began calmly with him answering questions in his driveway with his cousin standing nearby.

“What’s going on between you and your girl?” one officer asks.

“We were just having a little argument,” Hayes responds. “She was throwing some stuff at me.”

The officers say they need to speak to his girlfriend. They tell him and his cousin to wait outside. Hayes questions why he can’t go into his home and asks if they have a warrant to go inside.

The officers respond that they don’t need one, which may or may not be true under California law. Among the mitigating factors are whether the officers believe a victim is seriously hurt.

Two officers blocked Hayes as he approaches the front door, while his cousin tells him to calm down. One officer pushes Hayes and his cousin holds him back.

The police separate the men and grab Hayes’ arms. The situation then rapidly escalates.

Hayes’ cousin begins yelling “Jaxson, stop!” as he scuffles with the officers, shoving one into a wall near the front door. One officer pulls out a Taser as others tackle Hayes.

“Stop resisting or I’m gonna tase you!” he yells several times as Hayes struggles on the ground. The officer alternates pressing a hand and knee to Hayes’ neck. Hayes’ girlfriend comes out of the home and screams “Stop! Stop! What are you doing?”

“Stop resisting or I’m gonna tase you!” the officer yells as Hayes gasps “I can’t breathe.”

As two officers hold Hayes’ arms, the officer fires the Taser, pressing it close to his chest for several seconds amid cries for them to stop from his girlfriend and cousin.

Hayes screams and flips over. The officer fires the Taser a second time, pressing it close to Hayes’ buttocks and the back of his legs, yelling “stop resisting!”

The officer threatens to use the Taser on him again as Hayes insists that he’s not resisting.

The officers are ultimately able to handcuff him and force him to sit in a chair. Blood is visible on his arm and shirt.

LAPD officers are trained to aim a stun gun at a person’s back and navel if the Taser’s probes are being used from a distance of 7 to 15 feet (over 2 meters to nearly 5 meters), according to the agency’s policy. The Taser should be deployed on the person’s forearm or the outside of their thigh or calf if the officer is using the device’s direct stun feature.

Targeting a person’s chest with a Taser is controversial and the device’s maker has previously said to avoid that area.