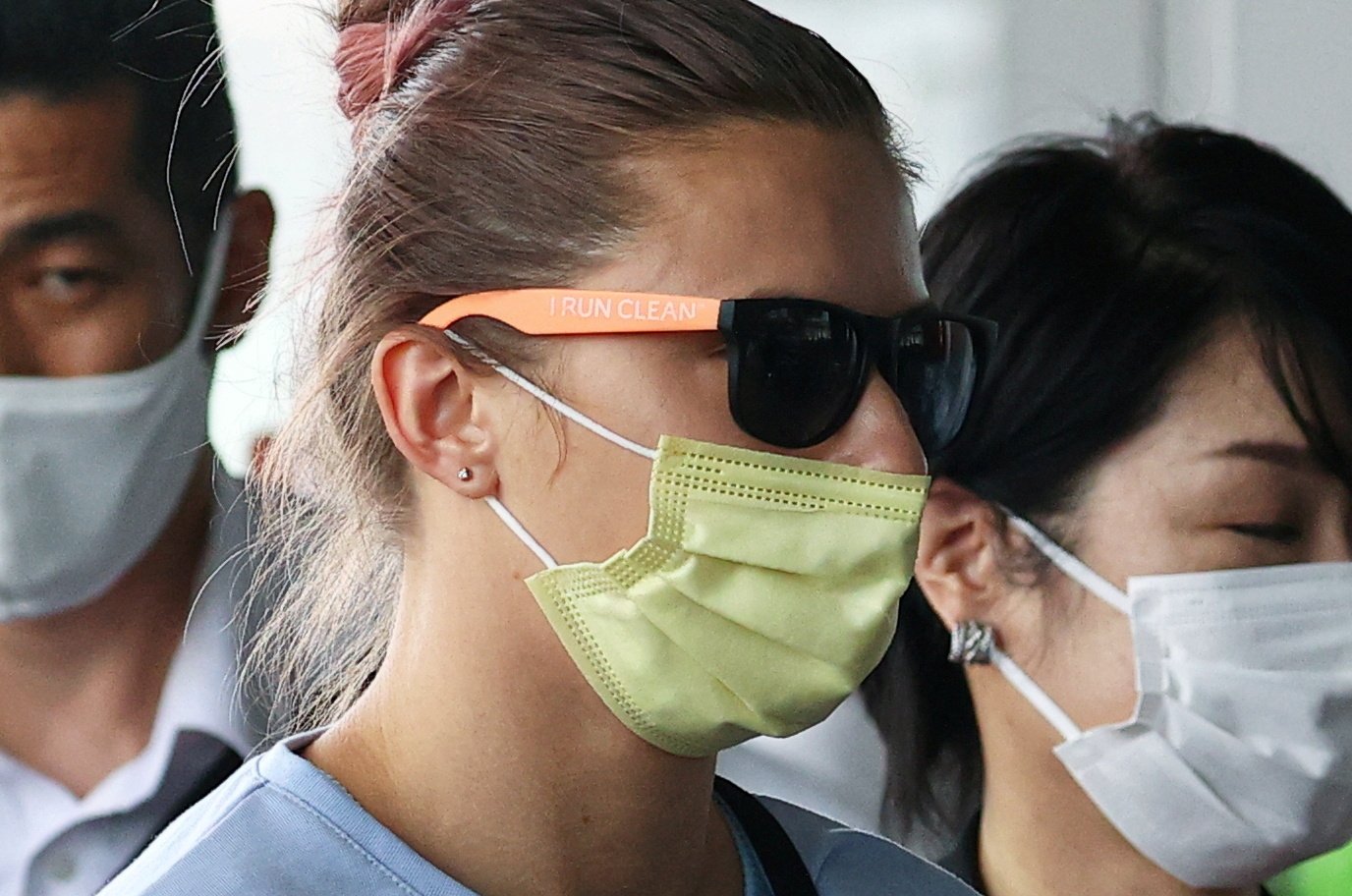 Less than 72 hours after refusing an order to return home, Belarus athlete Krystsina Tsimanouskaya left Tokyo for Vienna under the diplomatic protection of Poland on Wednesday.

The apparent Cold War-style defection of an Olympic athlete had become one of the major news stories of the Games, and could further isolate Belarus, which is under Western financial and economic sanctions after a crackdown by President Alexander Lukashenko against the opposition since last year.

After spending two nights in Poland's embassy, the 24-year-old sprinter walked onto the plane at Narita airport wearing blue jeans, a blue blouse and sunglasses with "I RUN CLEAN" written on them.

She was initially due to leave on a flight to Warsaw. A Polish government source said she was switched at the last minute to a flight to Vienna, over concerns about her privacy and security after news of the plan became public and reporters booked seats on the flight.

Concern was particularly high because of an incident in May, when a Ryanair flight was forced to land in Belarus and a dissident journalist was arrested, the Polish source said.

The sprinter caused a diplomatic furor on Sunday when she said her coaches had cut her Tokyo Games short, demanding she pack her bags at the Olympic village and taking her to the airport against her wishes because she had criticized them.

She refused to board the flight and sought the protection of Japanese police.

"I will not return to Belarus," she told Reuters at the time.

The Belarus National Olympic Committee (NOC) did not respond to a request for comment on Wednesday. Previously, the NOC said coaches had decided to withdraw Tsimanouskaya from the Games on doctors' advice about her "emotional, psychological state."

Austria's interior ministry said Tsimanouskaya could count on the country's support on her arrival in Vienna. The ministry expected she would travel on to Warsaw, but if she were to apply for asylum in Austria it would be handled according to legislation there, it added.

Poland-based Belarusian opposition politician Pavel Latushko said she would go to Warsaw, and Poland's deputy foreign minister Marcin Przydacz confirmed she was still in the care of the Polish diplomatic services.

A Belarus interior ministry spokesman could not be reached for comment about security on Tsimanouskaya's flight. Belarus government officials have said little so far publicly about her case.

The affair has played out amid increased concern for the safety of Lukashenko's critics, including in neighboring countries, following a crackdown that has seen tens of thousands of arrests inside Belarus.

Vitaly Shishov, a Belarusian activist living in Ukraine, was found hanged in a park near his home in Kyiv early on Tuesday. Ukrainian police have launched a murder investigation, and President Volodymyr Zelenskiy ordered a review on Wednesday into the safety of Belarus exiles.

Sport plays a high-profile role in Belarusian politics under Lukashenko, a hockey player and cross country skier known to compete in televised races in which his opponents fall before crossing the finish line. Lukashenko personally headed the Belarus Olympic committee until he was replaced by his son this year. His website quotes him as saying "Sport is our ideology."

The International Olympic Committee has started an investigation into Tsimanouskaya's claim that she had been removed from the athlete's village and said Wednesday it had received a report from the Belarusian team.

"The IOC is opening a disciplinary commission to establish the facts in this case and to hear the two officials – Artur Shumak and Yuri Moisevich – who had been allegedly involved in this incident," said IOC spokesman Mark Adams.

The incident has focused attention on Belarus, where police have cracked down on dissent following a wave of protests triggered by an election last year which the opposition says was rigged to keep Lukashenko in power.

Belarusian authorities have characterized anti-government protesters as criminals or violent revolutionaries backed by the West and described the actions of their own law enforcement agencies as appropriate and necessary.