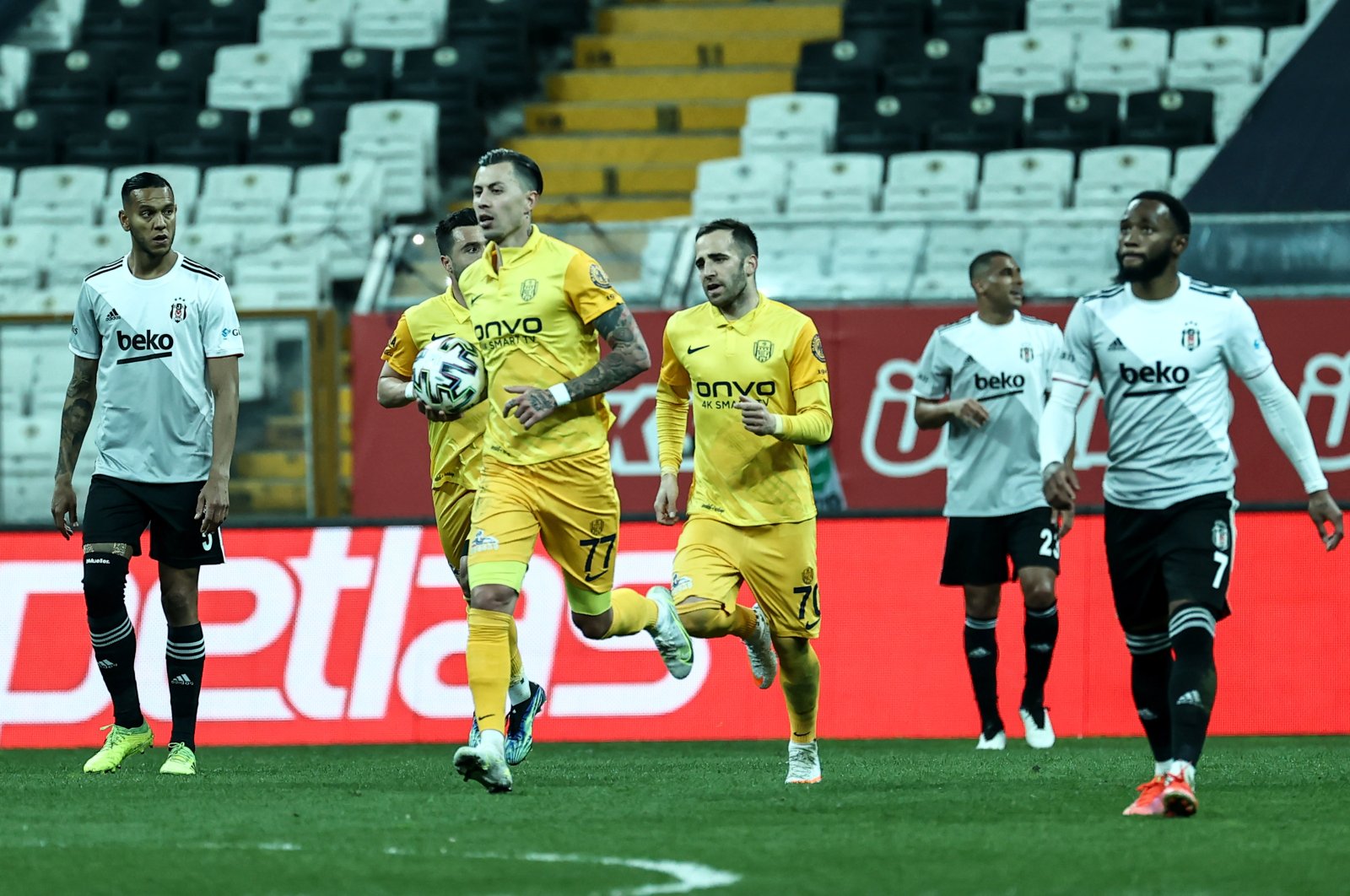 MKE Ankaragücü footballer Emre Güral sprints to the middle of the field with the ball after his team scored a penalty goal against Beşiktaş in a match that ended 2-2 at the Vodafone Arena, Istanbul, Turkey, April 16, 2021. (AA Photo)
by DAILY SABAH WITH AA Apr 16, 2021 11:33 pm
RECOMMENDED

It has been a Friday to forget for the Istanbul-side Beşiktaş as the Süper Lig leader dropped two valuable points and failed to score a goal against MKE Ankaragücü with the capital city-side contributing all four goals in the 2-2 draw, in the form of two own goals and two penalties.

In the 35th week of the season, Beşiktaş wanted to continue its winning ways after picking up two victories in a row against Aytemiz Alanyaspor and Erzurumspor, trying to forget the Kasımpaşa defeat, but failed to do so.

The Black Eagles started the match as they would have dreamed with a penalty given in their favor in the first minute when the Istanbul-side's Turkish midfielder Oğuzhan Özyakup drew a foul in the penalty area.

However, Beşiktaş failed to capitalize on the great opportunity as Georges-Kevin Nkoudou's right-footed shot in the bottom left corner was saved by Ankaragücü's goalkeeper Korcan Çelikay.

Beşiktaş continued their search for a goal in the absence of their star strikers Vincent Aboubakar and Cenk Tosun, who were both out with injuries, but could not crack the Ankaragücü defense and keeper until first-half extra time.

At the end of the first half, Ankaragücü handed the lead to Beşiktaş as defender Ante Kulisic headed a cross from Rachid Ghezzal into his own net leaving Çelikay to grasp the empty air.

Ankaragücü started the second half in the same fashion, as before long, in the 52nd minute, Kulisic once again headed the ball past his own goalkeeper in a low cross from Beşiktaş right-back Valentin Rosier.

Beşiktaş continued their efforts to extend the lead, they almost did with Rosier as he dribbled past a couple of Ankaragücü players and put the ball in the back of the net, but referee Halis Özkahya detected a foul in the lead-up to Rosier's shot.

There was more work ahead of Özkahya, as he gave two penalties to Ankaragücü in the second half, with the first being a foul by Beşiktaş central defender Welington on Joseph Martin Paintsil in the 64th minute and the second by winger Gökhan Töre, again on Paintsil in the dying moments of the game.

Paintsil drew both fouls that led to the penalties and he scored both Ankaragücü's goals from the spot.

The result saw Beşiktaş retain its leadership at the top of the table with 71 points as the championship battle entered its final seven weeks. The Black Eagles sit 5 points ahead of fellow Istanbul-side and rivals Fenerbahçe, and 9 in front of Galatasaray which has a game in hand.

Speaking after the game, Beşiktaş manager Sergen Yalçın expressed dissatisfaction with the attitude of some of his players. "Our opponents also have other matches, we will see what happens. Our match should not have been like this. We normally play a different type of game,” Yalçın told Anadolu Agency (AA).

Yalçın said that they were not able to obtain the desired productivity from their player interchanges. “We replaced Oğuzhan with Mensah, but unfortunately his performance was down. We still can't set this area in place. There are three players here but we don't get the productivity we want.”

“So, it looks like we have to build a different system going forward,” he said and added, “We need to continue by correcting these mistakes, otherwise we will have a lot of problems in the remaining seven weeks."