Argentina, Chile go through to quarterfinals in Copa America 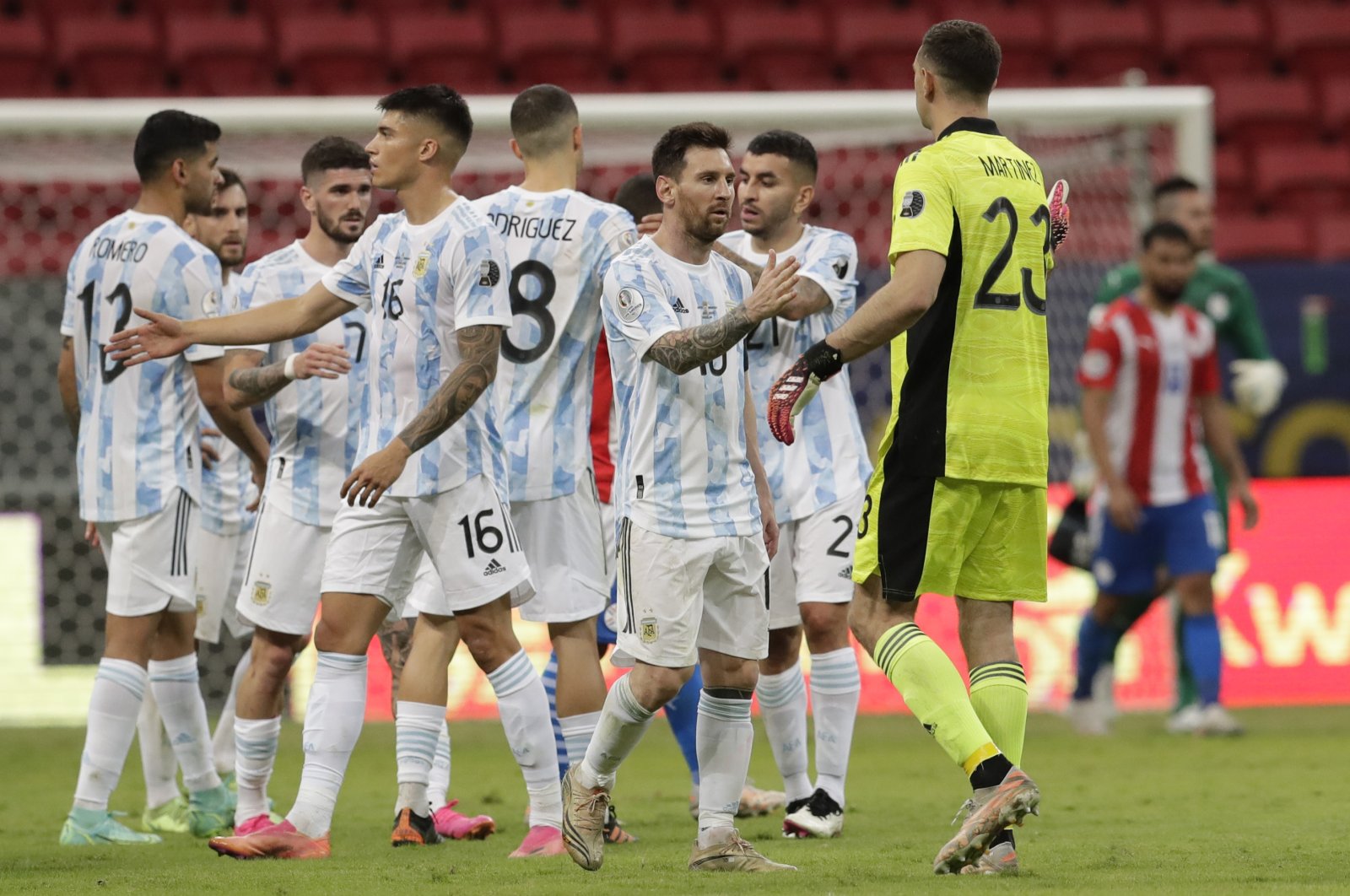 Argentina's players greet each other at the end of a Copa America match against Paraguay at the National Stadium in Brasilia, Brazil, June 21, 2021. (AP Photo)
by French Press Agency - AFP Jun 22, 2021 12:33 pm
RECOMMENDED

Lionel Messi's Argentina booked a place in the Copa America quarterfinals after beating Paraguay 1-0 in Brasilia on Monday.

In the other Group A match on the night, Chile played out a 1-1 draw against Uruguay to secure its place in the last 8 of the continental tournament, which leaves the other two spots in the group up for grabs.

Argentina logged its second win in three group matches played, with Alejandro "Papu" Gomez scoring the sole goal of a lackluster match in Brasilia in the ninth minute.

The win placed the La Albiceleste top of Group A with seven points – enough to secure its spot in the next phase of the tournament being played in empty stadiums in coronavirus-battered Brazil.

The match marked a personal milestone for Messi, who tied Javier Mascherano's record for the most games played for Argentina – 147.

But it was not a night of glory for Messi or his team, who in the second half seemed to resign themselves to defending a spirited, but ultimately fruitless, Paraguayan attack.

With four matches left to play in Group A, Paraguay has three points, Uruguay one, and Bolivia zero, meaning they all still stand a theoretical chance to go to the quarterfinals.

Brazil has already qualified from Group B.

Despite opposition from politicians and citizens, Brazil agreed at the 11th hour to host the world's oldest international tournament after South American football's governing body CONMEBOL took it from co-hosts Argentina, battling a pandemic surge, and Colombia where dozens have died in anti-government protests.

The contest had already been delayed by a year due to the pandemic and many players and coaches spoke out against it going ahead before the tournament began.

The build-up to Monday's Chile-Uruguay game had been overshadowed by controversy in the Chile camp after revelations the team had breached COVID-19 protocols by bringing a local hairdresser into the team hotel.

CONMEBOL said it would fine those involved $30,000.

However, there was no sign of the controversy affecting their play, with Vargas firing Chile ahead on 26 minutes from a tight angle after latching onto a clever pass from English-born Ben Brereton.

Uruguay grabbed a share of the points in the second half when Suarez bundled in the ball from close range during a tangle with former Barcelona teammate Arturo Vidal at the far post following a corner.

Vargas's first-half strike saw him draw level with Peru's Paolo Guerrero on 14 goals in the Copa America's all-time goalscoring rankings, three behind the record of 17 held by Brazil's Zizinho and Argentina's Norberto Mendez.