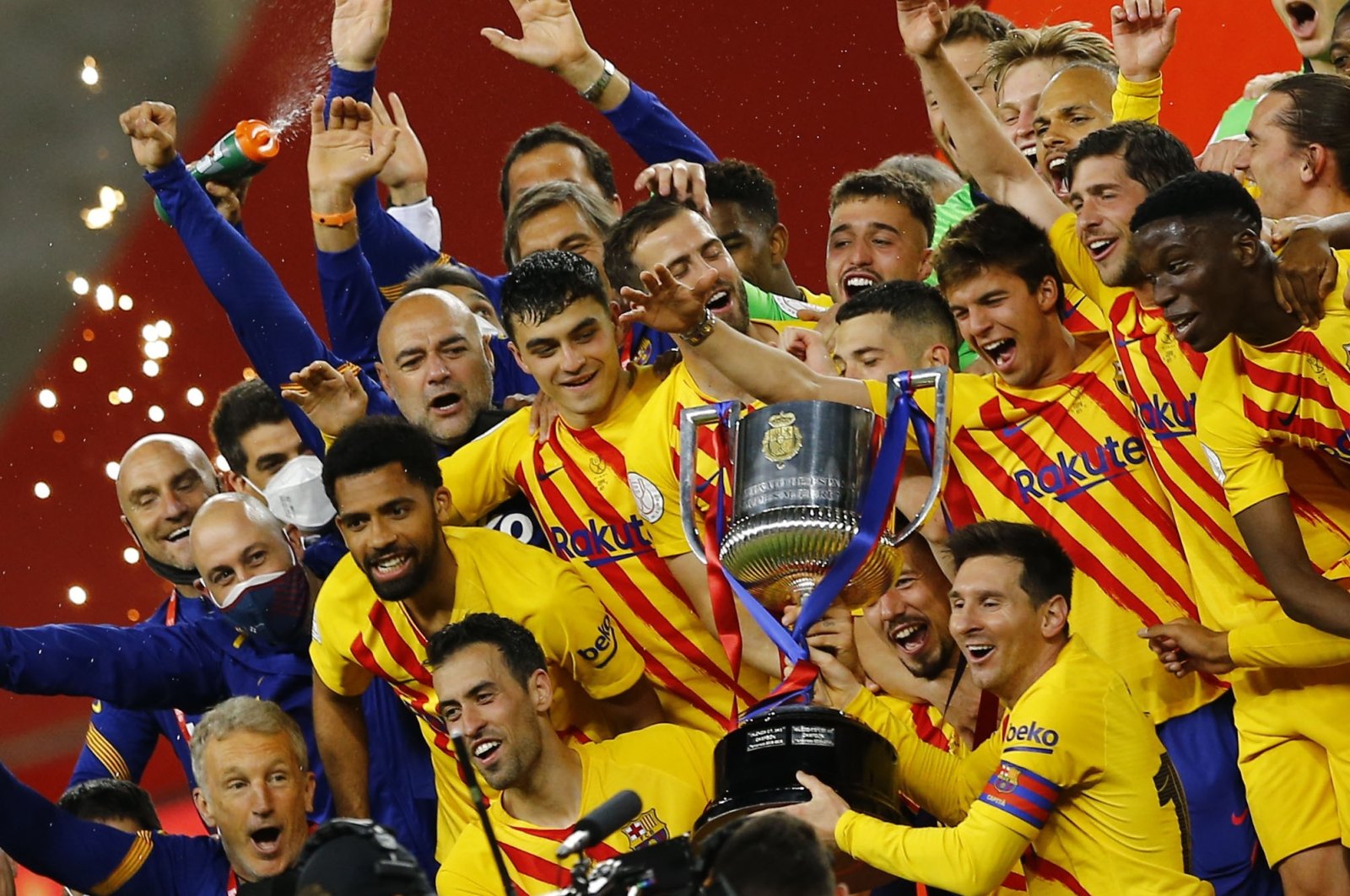 A brilliant brace by the Argentine maestro Lionel Messi helped Barcelona to a comfortable 4-0 victory over Athletic Bilbao to win the Copa del Rey final on Saturday.

The win also secured Ronald Koeman his first title as coach of the Catalan club.

Frenkie de Jong headed in a second goal in the 63rd before Messi dealt a double blow to put the result beyond any doubt by the 72nd.

It is Barcelona's first title since winning the Spanish league in 2019. Koeman, a former Barcelona defender, returned to coach the club last summer after Barcelona finished last season without a title for the first time since 2008.

Barcelona's record 31st cup comes at a crucial junction for Barcelona and Messi. Barcelona has seen its finances badly damaged by the pandemic and its former president Josep Bartomeu was forced to resign after the team’s poor performance last season and alleged administrative irregularities. Bartomeu has denied any wrongdoing.

But the peak of the club's crisis came last summer when Messi said that he wanted to put an end to his highly successful two decades with Barcelona. Since then, he has only said he will make a decision when his contract is up at the end of this season.

Messi did not mention his plans after the game. He smiled broadly when he received the trophy from Spain's King Felipe VI, one of the few dignitaries along with Spanish Prime Minister Pedro Sanchez in attendance at a stadium closed to fans due to coronavirus restrictions.

"This is a very special cup for me to lift (as captain),” Messi said. "It is too bad we cannot celebrate it with our family and fans. But that is the situation we have to accept.”

Even though Messi avoided the burning question of his future, his performance will raise hopes for Barcelona fans of the football great staying at Camp Nou.

And for Joan Laporta, who returned to the club’s presidency last month, Messi should have an easy choice ahead of him.

"Leo is the best player in the world, Leo has deep roots in this club, and I am convinced that he wants to stay,” Laporta said. "We will do all we can for him to stay with us. That is what we most want. And today Messi gave a master class of football while being supported by a great team.”

Bilbao has now lost two Copa del Rey finals this month at La Cartuja Stadium in Seville. Bilbao lost 1-0 to Real Sociedad just two weeks ago when they met in the 2020 final that had been postponed due to the pandemic. Sociedad's reign as Copa champion lasted all of 14 days.

Messi again showed, at age 33, that he can still completely dominate a final.

Barcelona suffocated Bilbao from the start, with Messi combining with his teammates on the right side of the attack to repeatedly punch holes in the Basques’ defense.

The bombardment started in the fifth when Sergio Busquets’ lob found Messi, who returned the ball for De Jong to fire off the post.

Bilbao’s defense had to hustle to keep the score 0-0 by halftime with Messi linking up with his teammates seemingly at will inside the opponents’ area.

The second half continued with Messi dictating the pace, and now Simon had to save Bilbao.

But Simon could do nothing to keep out Griezmann’s sharp one-touch strike off De Jong’s cross from the right after Messi had again taken the ball and forced Bilbao to scramble back into its box.

With Bilbao reeling, Barcelona struck again – this time from the left. Messi also played a subtle part in this goal, making a dummy run to open space for De Jong to push forward and head in Jordi Alba’s cross.

De Jong then helped Messi slalom through Bilbao from near the middle of the field into the heart of the area by exchanging two quick passing combinations with the Argentine. Messi capped the move by dribbling past the last defender before slotting in his team’s third goal in the 68th.

Messi rounded off his stellar performance that earned him a 35th career title for Barcelona when he fired in a pass from Alba. Simón got an arm out but, like so many before, could not keep Messi out.