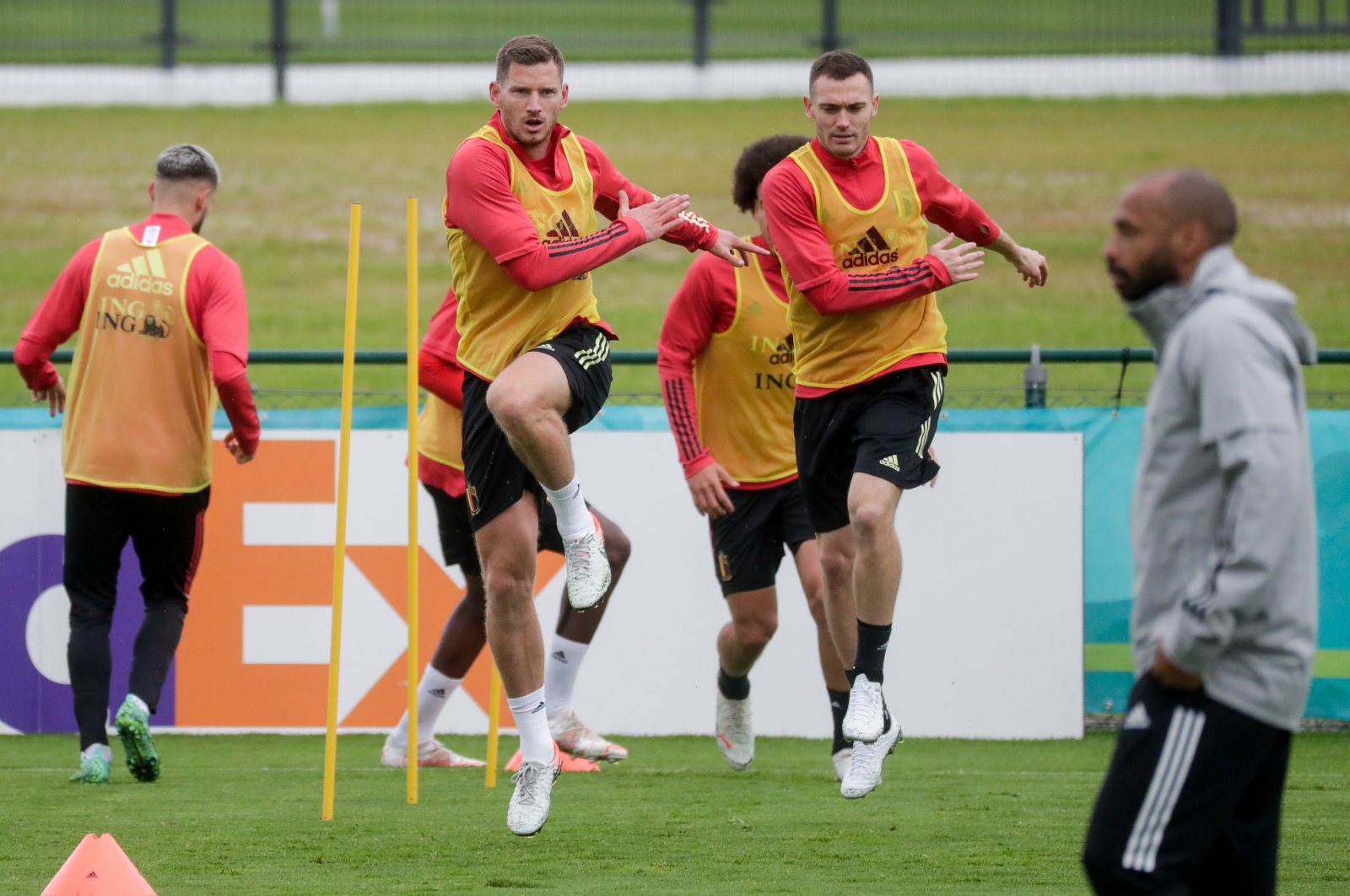 Belgium faces injury concerns ahead of the clash against Italy, which is on a national record run of 31 games unbeaten after digging deep to seal a 2-1 extra-time victory over Austria in the last 16

Belgium faces the risk of missing out on Kevin De Bruyne and Eden Hazard, as the world's top-ranked side prepares to take on European giants Italy in the Euro 2020 quarterfinal Friday.

Thorgan Hazard fired Belgium into the last eight with the goal that knocked out holders Portugal, but the fitness of his brother Eden and De Bruyne is Belgium's main concern before facing the Azzurri in Munich.

De Bruyne came off early in the second half against Portugal with an ankle knock, while Belgian captain Hazard injured a hamstring late in the game.

Neither trained Wednesday with Belgium's medical staff working around the clock to get them fit to face Italy.

Coach Roberto Martinez admits neither player will probably be 100% in Munich, "but we will use every day to get them as fit as possible."

Manchester City midfielder De Bruyne is central to Belgium's hopes of reaching the semifinals, where Spain or Switzerland would await next Tuesday.

Martinez is assessing his alternative options in attacking midfield.

Martinez expects Italy to "attack from the very first second, they will be very structured," underlining the need for De Bruyne's presence to guide Belgium's counterattacks.

"De Bruyne is a player who makes the difference. We have to stop him because he always finds space. He can be really dangerous," said Jorginho.

With four wins and three clean sheets so far at Euro 2020, the Belgians are living up to their billing as the world's top-ranked team.

However, Italy is on a national record run of 31 games unbeaten after digging deep to seal a 2-1 victory over Austria following extra time in the last 16.

Second-half replacements Federico Chelsea and Matteo Pessina scored to send the Italians through.

"They've had a good run of wins and it will be a nice challenge for us to end that sequence."

Belgium striker Romelu Lukaku, the Serie A player of the season as Inter Milan ended an 11-year title drought, has scored three goals at the tournament.

Italy midfielder Pessina says the Inter star is a handful who "can take on three defenders by himself."

Meanwhile, forward Ciro Immobile has answered critics' claims he only scores in the blue of Lazio, not the national team, with goals against Switzerland and Turkey in the group stages.

After 25 goals in 41 games last season for Lazio, Immobile has the confidence of Italy coach Roberto Mancini, but had a frustrating night against Austria, hitting the post with half an hour gone.

The striker says the Azzurri have a point to make to Italian fans at Euro 2020.

Failure to qualify for the 2018 World Cup was "a lesson for us that will hopefully help us to go far in this European Championship and write over the ugly memories," said Immobile.

Spain on the rise

After shedding its early tournament jitters, free-scoring Spain looks ready to emulate its serial-winning predecessors, although Euro 2020 quarterfinal opponents Switzerland is exactly the type of team they hate to face.

Spain won its first knockout tie since lifting Euro 2012 to beat Croatia 5-3 and become the top-scoring side in the tournament with 11 goals after netting only once in its first two games.

There was even more excitement among Spanish fans when unfancied Switzerland stunned world champions France after coming back from 3-1 down to draw 3-3 and prevail on penalties.

Yet even though the Swiss lack world stars like France's Antoine Griezmann, Karim Benzema, or Kylian Mbappe, Spain must be prepared for a long evening finding their way through Vladimir Petkovic's disciplined side on Friday in St. Petersburg.

After Spain's frustrating opening draws with Sweden and Poland, coach Luis Enrique said that facing a side sitting deep and defending was "the hardest thing in football"

Switzerland hardly has the most resilient defense after conceding eight goals in four games but Petkovic, who has been using a 3-4-1-2 formation, is likely to set his side up to deprive Spain of space in the final third.

Towering striker Haris Seferovic, who scored two headed goals against France, also poses a serious aerial threat which Spain's centrebacks Aymeric Laporte and Pau Torres have struggled to deal with in the tournament, being out-jumped by Poland's Robert Lewandowski and Croatia's Mario Pasalic.

Spain keeper Unai Simon insisted his side were no more pleased to face Switzerland than France.

"It's a quarterfinal tie, we don't depend on our opponents, we depend on ourselves. We play to win this Euros and we don't mind who we play, to win this tournament we have to face the best teams," he told reporters Wednesday.

Simon made a remarkable gaffe by letting a back pass from teammate Pedri trickle into his own net against Croatia in what became the own goal from the furthest distance in the tournament's history.

But he has talked up the team's character, on display as it outplayed Croatia after falling behind to the own goal and then rallied in extra-time from conceding two late goals.

"The veterans always tell us big tournaments are won by teams, not names, and we are a team. I don't know how far we'll go but everyone can see how united we are and whatever happens. If we go behind or ahead, we're all in it together," he added.

"I can't say whether there were egos in previous Spain teams, but this is a very humble, hardworking group that is really excited about winning this European Championship."