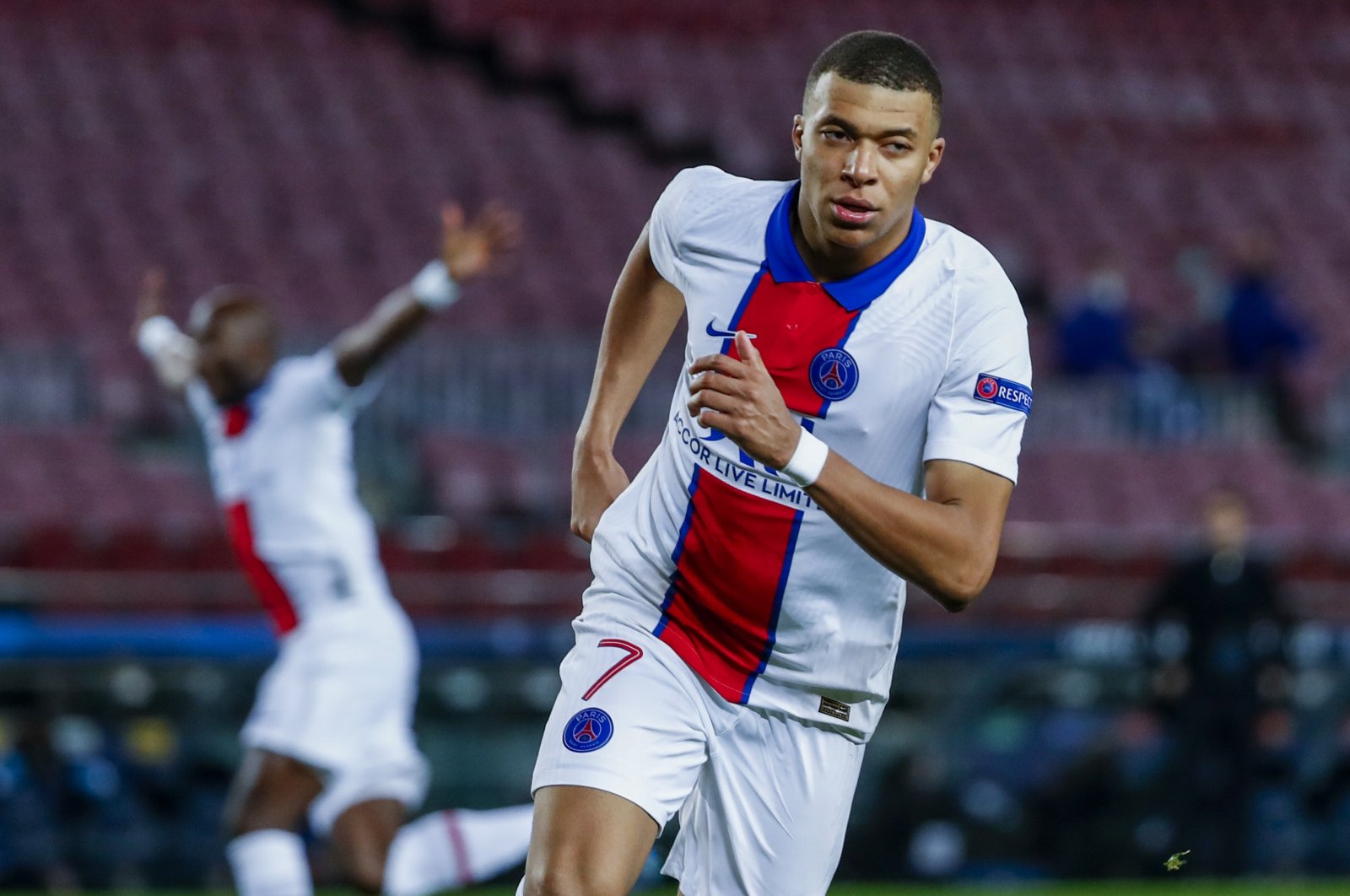 PSG's Kylian Mbappe celebrates scoring a goal against Barcelona during their Champions League round of 16 match at the Camp Nou, Barcelona, Spain, Feb. 16, 2021. (AP Photo)
by Agencies Feb 17, 2021 12:29 pm
RECOMMENDED

Paris Saint-Germain's Kylian Mbappe has what it takes to reach the level of modern greats Lionel Messi and Cristiano Ronaldo, Barcelona's Antoine Griezmann said after the 22-year-old scored a hat-trick in a 4-1 Champions League win Tuesday.

One of the key men in France's 2018 World Cup triumph as a teenager, Mbappe again stood tall on a big occasion in his first match at Camp Nou, promptly canceling out Messi's penalty in the first half before striking twice after the break.

He also became the first player to net a treble away to Barca in Europe's elite competition since Dynamo Kyiv's Andriy Shevchenko in November 1997, over a year before Mbappe was born.

"Kylian had a great night," said Griezmann, Mbappe's strike partner with France. "PSG have a star for the future, who will be at the same level as Leo Messi or Cristiano."

PSG coach Mauricio Pochettino also heaped praise on Mbappe, who helped the Argentine record only his second victory over Barca after spending years as a player and then coach with their long-suffering city rivals Espanyol.

"It's obvious that Kylian is a great footballer," said Pochettino following his side's last-16, first-leg victory.

"He proved that with his three goals but he also showed real commitment by getting involved with defensive work too. As well as being brilliant for the three goals, he put in a huge effort for the team when Barca were putting pressure on us."

The PSG coach added: "Yesterday in our training session he asked me how many times I had won at the Camp Nou. I said once with Espanyol, and he assured me that tonight I'd win for a second time. He's a top guy."

"Mbappe played very well and he always thought about doing the best for the team, he wasn't just thinking about distinguishing himself," he said.

"He doesn't need to prove himself to anyone, the whole world knows him already and we're very happy to have him. When we see him go and perform like that, we feel privileged."

After a rocky start to his Premier League career over the weekend, Liverpool's Turkish defender Ozan Kabak made an impressive recovery against RB Leipzig in the Champions League.

Stationed alongside the Reds' captain Jordan Henderson, the 20-year-old made the most tackles and interceptions, won nearly 78% of his duels, eventually helping his side keep a clean sheet in the 2-0 win.

The performance earned him the Liverpool's official Man of the Match award in a poll held on Twitter.

The young defender received 56% of the votes. Egyptian star Mohamed Salah came second with 22%, and English midfielder Curtis Jones picked up 16% of the votes.

"It was so special for me because this was my first clean sheet and my first win in this jersey," Ozan told Liverpoolfc.com.

Kabak also became the first Turkish player to appear for an English club in the Champions League.

On Feb. 2, Kabak completed his loan move to Liverpool from Schalke 04.

"After such a long time with Schalke, he was new to that and I think his attitude was good," Liverpool manager Jurgen Klopp told a post-game press conference. "Very happy with his performance."

Captain Henderson, however, insisted the "job is only half done" after the win.

Goals by Mohamed Salah and Sadio Mane in a five-minute spell early in the second half sealed Liverpool's first-leg victory in Budapest.

"Overall, it was a pleasing performance, a good win but it is only half the job done," Henderson told BT Sport.

"We just wanted to keep going, keep fighting. We've had a lot of difficult situations throughout the season."

"Tonight was a good step in the right direction, but we need to continue with that and if we do we'll get good results along the way."