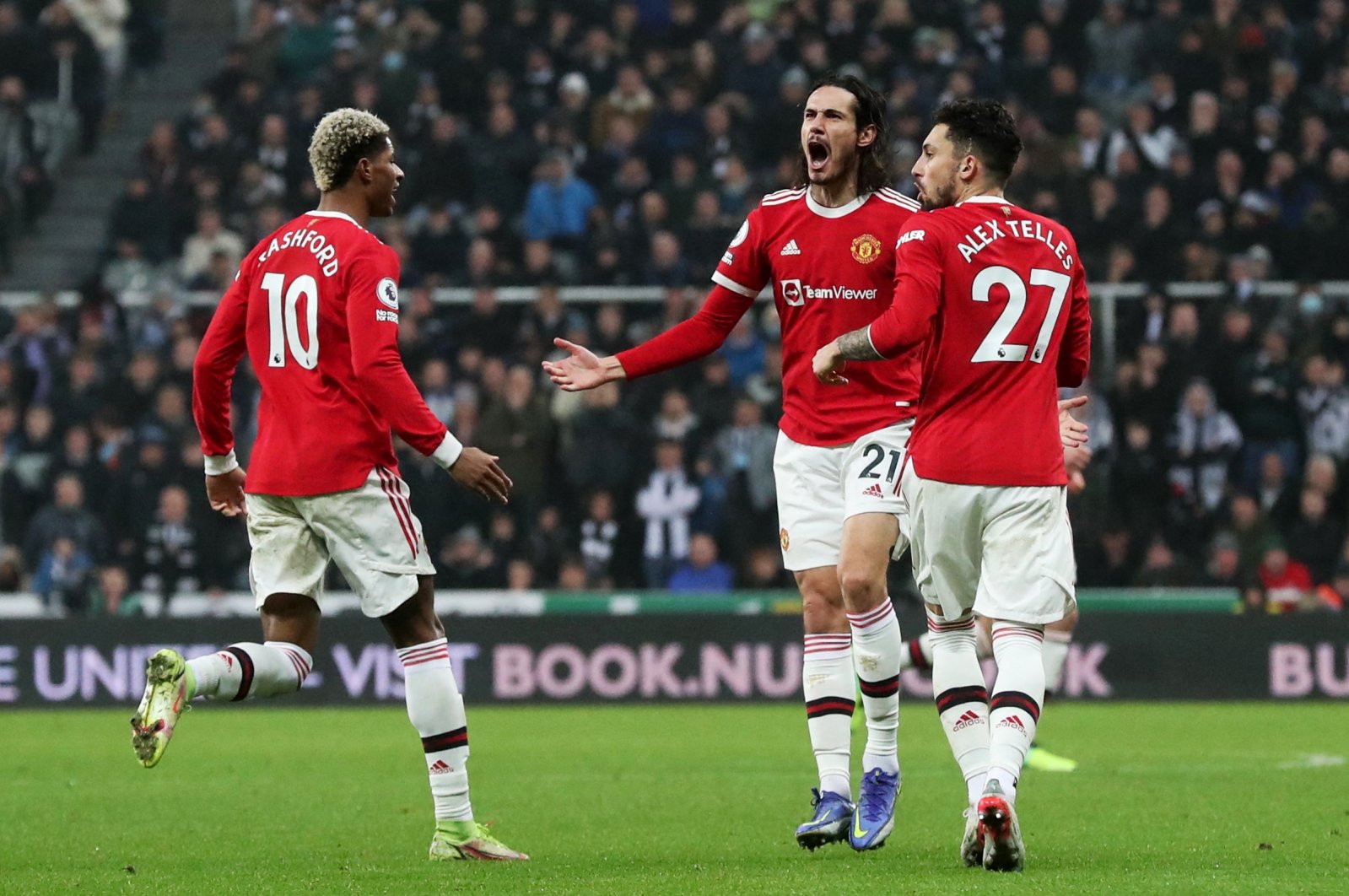 Manchester United's interim boss Ralf Rangnick was unimpressed by his star players' lack of aggression after Edinson Cavani had to come off the bench to rescue a 1-1 draw at relegation-threatened Newcastle on Monday.

Rangnick's side trailed to Allan Saint-Maximin's eye-catching early goal and was outplayed for long periods at St. James' Park.

Cavani came off the bench to bag his first goal since October in the second half, ensuring Rangnick avoided a first defeat in four games as United manager.

But United remains in seventh place in the Premier League, seven points behind fourth-placed Arsenal with two games in hand.

Rangnick had won his first two league games since taking over from the axed Ole Gunnar Solskjaer, but neither performance was especially convincing and this was another underwhelming effort.

"I didn't like the performance at all. We didn't control the game apart from a few moments. It's all about energy, physicality and who wins the second balls. In all those areas we weren't at our best," Rangnick said.

"If you want to be competitive you have to get physical and this was not the case in many parts of the game."

United did have the excuse of the COID-19 outbreak that forced it into 16 days of inactivity since it won 1-0 at Norwich on Dec. 11.

Its games against Brentford and Brighton were postponed, with the club's training ground shut for four days.

But regardless of the coronavirus chaos, Rangnick will know United must improve dramatically if it is to secure a top-four finish.

"We need to be better and get more physical," he said. "We shouldn't be looking for excuses.

"We have to meet the demands in terms of speed, tempo and rhythm."

Second-bottom Newcastle ended a three-game losing streak, leaving it two points from safety after the most encouraging display of Eddie Howe's eight-match reign.

Raphael Varane returned from injury to replace Lindelof, but United looked rusty after its enforced lay-off and Newcastle took advantage to snatch a seventh-minute lead.

Varane carelessly gifted possession to Sean Longstaff and he picked out Saint-Maximin.

The French winger showed his mesmerizing dribbling ability as he shimmied past Diogo Dalot and Harry Maguire before steering a fierce strike past David De Gea from the edge of the area.

Newcastle was a real threat on the counter and Jonjo Shelvey broke from the halfway line for a 25-yard rocket that De Gea pushed away.

United's lethargy was encapsulated by a Cristiano Ronaldo miskick that drew a mocking roar of delight from the Gallowgate End.

Rangnick responded by sending on Sancho and Cavani for Fred and Greenwood at halftime.

Crucially, Saint-Maximin should have scored with a close-range effort that lacked the power to beat De Gea.

United finally began to emerge from its shell and Marcus Rashford's dipping shot forced a tip-over from Martin Dubravka.

Ronaldo's frustrations boiled over as he was booked for a reckless challenge on Ryan Fraser that had Newcastle baying for a red card.

But United equalized in the 71st minute when Dalot's cross reached Cavani and the Uruguay striker stabbed home at the second attempt after his first effort was blocked.

It was the 80th league goal conceded by Newcastle in 2021, the most of any Premier League team in a calendar year.

Cavani almost made it 81 moments later as his goalbound flick was hooked off the line by Jamaal Lascelles.

In a dramatic finale, Newcastle's Jacob Murphy hit the post with a curler before Miguel Almiron's strike forced a brilliant save from De Gea.