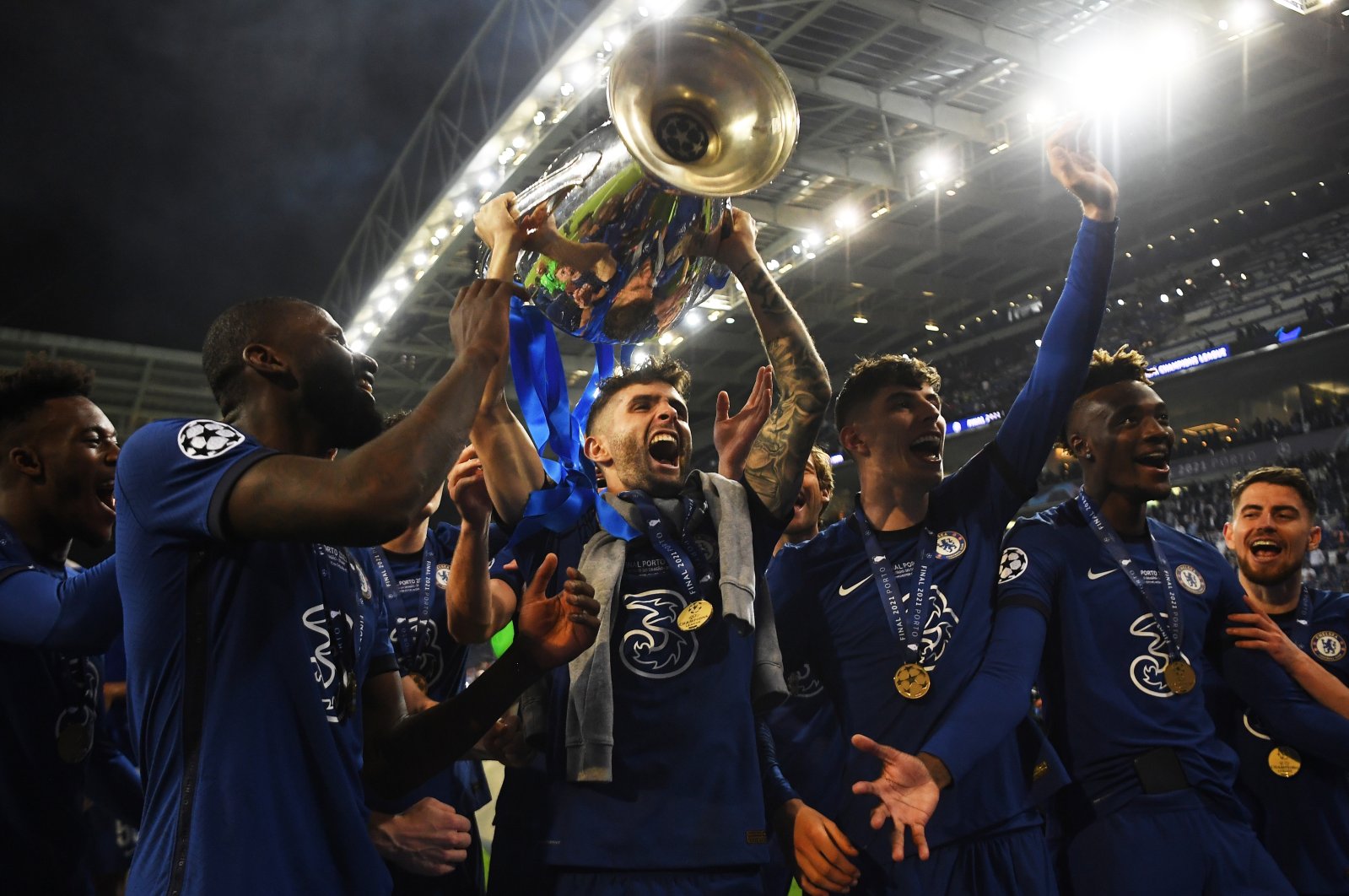 Christian Pulisic (C) of Chelsea lifts the trophy as he and teammates celebrate after winning the UEFA Champions League final against Manchester City, Porto, Portugal, May 29, 2021. (EPA Photo)
by French Press Agency - AFP
May 30, 2021 12:37 pm

There is huge room for improvement in the Premier League after Chelsea finished 19 points behind champion City, and a proper domestic title challenge will be expected now

Chelsea's German coach Thomas Tuchel said he was hungry for more after leading the London side to a second Champions League title in its history on Saturday.

While Manchester City had been building towards what it thought was its moment in the Champions League for five years under Pep Guardiola, Chelsea showed what can be achieved in just four months.

That is how long has elapsed since Tuchel became coach, replacing Frank Lampard with Chelsea ninth in the Premier League.

The German oversaw an immediate transformation in the club's fortunes, dragging it into the top four, taking it to the FA Cup final which it lost to Leicester City and now winning the Champions League.

It has beaten Guardiola's City for the third time in six weeks thanks to Kai Havertz's goal and now it is champions of Europe for the second time.

Tuchel is set to reap the rewards with a handsome new contract, although whether he will be allowed to put down roots in west London remains to be seen given how managerial cycles tend to go at Stamford Bridge.

Once again a mid-season managerial sacking has worked out perfectly for Chelsea, whose 2012 Champions League triumph came following the decision to sack Andre Villas-Boas and appoint Roberto Di Matteo.

This time Chelsea has struck gold with Tuchel, but the 47-year-old would not have been able to deliver such success without the huge investment in players that came before his arrival, as well as some of the outstanding young talents who were already thriving under Lampard.

Five of Chelsea's line-up at the Estadio do Dragao were signed at the start of the season, including match-winner Havertz, the 71-million pound ($100 million) recruit from Bayer Leverkusen. There was also Reece James and Mason Mount, youth academy graduates who are in England's squad for Euro 2020.

This is a team that has already conquered Europe but that appears to be just at the start of its adventure together.

"We have a strong bond, a strong group who can really defend and play and have answers on all questions in the game," Tuchel said Saturday.

"Once the celebrations are over and once we digest this experience, it is the moment to grow, to evolve, to learn from it and become better."

There is huge room for improvement in the Premier League after Chelsea finished 19 points behind champion City, and a proper domestic title challenge will be expected now.

"When you play for a club like Chelsea you are always thinking in the future," said veteran skipper Cesar Azpilicueta.

Tuchel knows full well that past success counts for little – Di Matteo was gone within six months of that 2012 victory and Tuchel himself was sacked by Paris Saint-Germain last December despite leading them to their first-ever final last season.

'I want the next one'

"When we won the Cup in Dortmund I did not arrive at the next training with less hunger, less desire or ambition," he said.

"Of course now is the time to celebrate for some days, to enjoy and let it sink in, for one or two weeks, to talk about it and reflect on it, but then it does surprisingly not a lot to you.

He was initially handed just an 18-month contract but has earned an extended deal after what he has achieved in such a short time.

"I am not even 100% sure, but maybe I already have a new contract now with that win. My manager said something about that but I didn't know so let's check this first," he told reporters with a smile.

"My desire is to go for more victories, to grow as a coach and to push the group on the first day of next season to the limit."

The next Premier League campaign starts on August 14, but Chelsea will play three days before that against Villarreal with an opportunity for another trophy in the UEFA Super Cup.