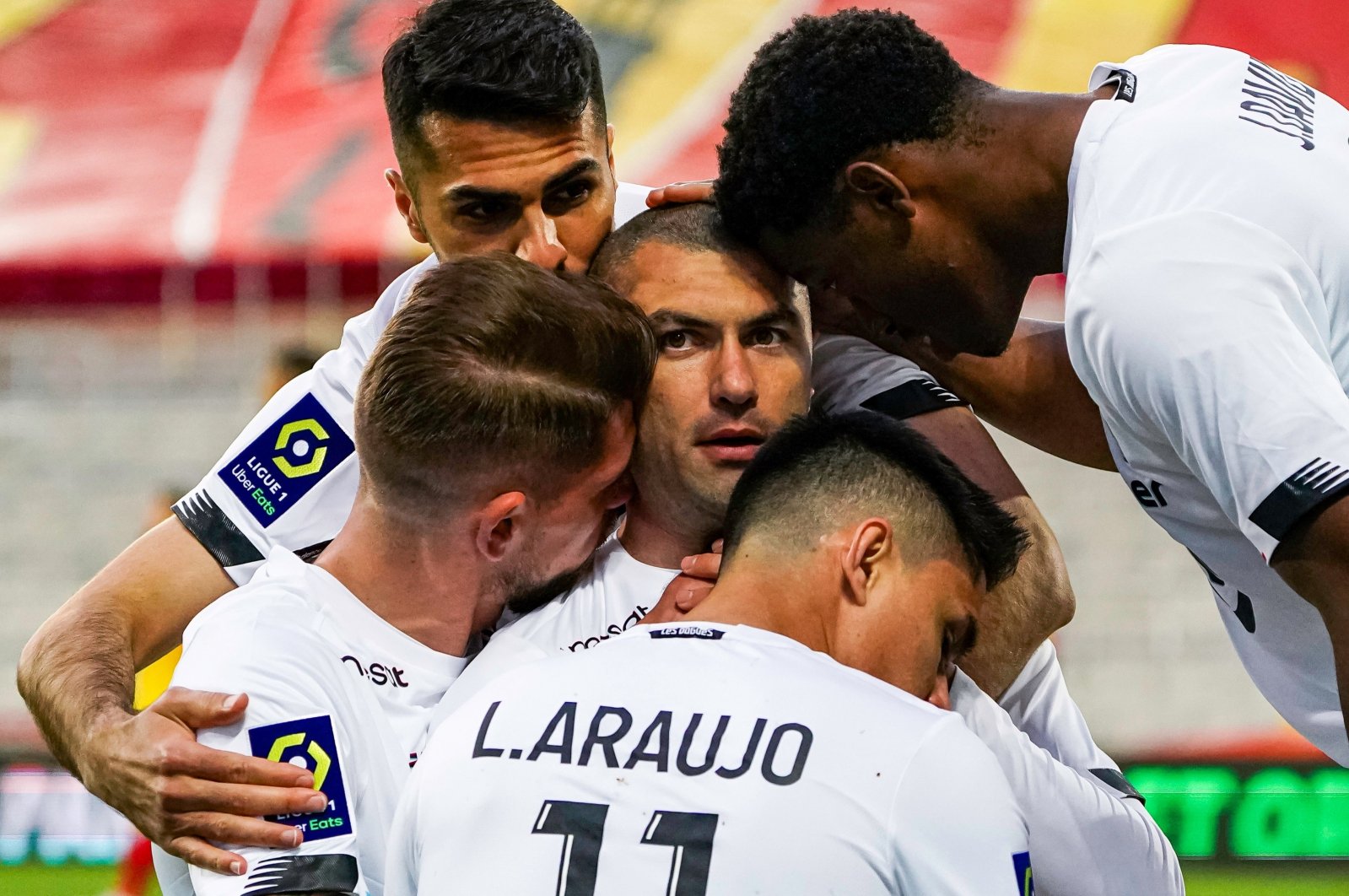 Lille's Burak Yılmaz (C) celebrates a goal with his teammates during a Ligue 1 match against Lens at the Stade Bollaert-Delelis in Lens, France, May 7, 2021. (IHA Photo)
by German Press Agency - DPA May 21, 2021 2:14 pm
RECOMMENDED

After being bought by Qatari investors, Paris Saint-Germain has turned Ligue 1 into its own personal playground, winning seven of the past eight titles.

This weekend PSG might extend that number to eight out of nine, but an unlikely challenger could put an end to the French giant’s dreams.

In a similar fashion to what Monaco did in 2017, leader Lille could snatch the trophy from PSG if it can hold on to the top spot after its final match of the season against Angers on Sunday.

And as Lille coach Christophe Galtier's fearless players try to pull off their heist, it is unlikely their star attacker will have Parisian eyelashes fluttered in his direction.

That is because he is a 35-year-old veteran Turkish striker who, before this season, had never played anywhere outside his home country in Europe.

Burak Yılmaz's CV provides a who's who of Turkish football, counting Beşiktaş, Fenerbahçe, Trabzonspor and Galatasaray among his former employers. In 2016, he enjoyed a hop aboard the fleeting Chinese Super League gravy train at Beijing Guoan.

He arrived at Stade Pierre-Mauroy on a free transfer last August with 224 league goals to his name over the course of a career impressive in its consistency. Nevertheless, it was impossible for the man brought in following Victor Osimhen's 70-million-euro ($85-million) departure to Napoli not to feel like an underwhelming replacement.

"During my career, I played in big clubs with a lot of pressure," Yılmaz said during his presentation to the media at Lille.

"I realized that this pressure was an advantage, something positive for me. It continues here in another way, with other objectives. I want to write a new page with Lille."

Yılmaz surely could not have imagined the fairy tale to which he now only needs to apply the final pieces of punctuation and a definitive full-stop on Sunday.

He went without a goal in Lille's opening four games, but the solid foundation that has become the bedrock of the team’s title change ensured Galtier's men went unbeaten and picked up eight points.

In his team’s fifth match, a late Yılmaz penalty sealed a 2-0 win over Nantes and, next time out, he crowned a fluid team move by outmuscling his marker and sliding home in a supreme piece of center-forward play. Strasbourg was beaten 3-0 and Lille's attacking fulcrum was off and running, not to look back.

He has 15 goals and five assists in Ligue 1 this season, more goal involvements than any of his teammates. Jonathan David has two assists alongside his 12 goals and Jonathan Bamba has six goals having laid on nine others.

Yılmaz has been forced to spend some time on the sidelines since the turn of the year and it is tempting to wonder whether Lille might already had the title in the bag were it not for a calf injury that ruled the team’s talisman out for two months.

He was on a run of three in three games before being forced to watch on for nine Ligue 1 rounds. His teammates plowed on, winning seven and drawing two of those games and he returned as a man on a mission.

Lille was 2-0 down at Lyon when he thundered home a magnificent 25-yard free-kick. Yılmaz crossed for David to equalize with an hour played and he then charged through to dink in an 85th-minute winner.

An astonishing 30-yarder as part of a brace in a 3-0 win at Lens was his 15th and best of the campaign, taking Lille to the brink of glory.

Last month, Lille picked Yılmaz as the player of the month for April. He also joined Mbappe and Neymar as a nominee for the Ligue 1 player of the year.

Yılmaz was unable to whip up another dose of magic last weekend, with a frustrating 0-0 draw at home to Saint-Etienne, meaning Lille's advantage heading into Sunday's decisive fixtures is down to a point.

Lille’s 80 points is already the club's record tally and is built as much on a watertight defense as it is on Yılmaz's attacking fireworks.

Only PSG in 2015-16 (19) has conceded fewer after 37 games than Les Dogues' 22, and Mike Maignan closed out a 21st clean sheet of the campaign against Saint-Etienne, a continental best.

Obviously, this makes Lille very hard to beat. It has only lost three Ligue 1 games, although one of those was against Angers in January.

That might set nerves jangling when it comes to the crunch this weekend, but the team needs only look towards Yılmaz and his air of a man who will not be denied.