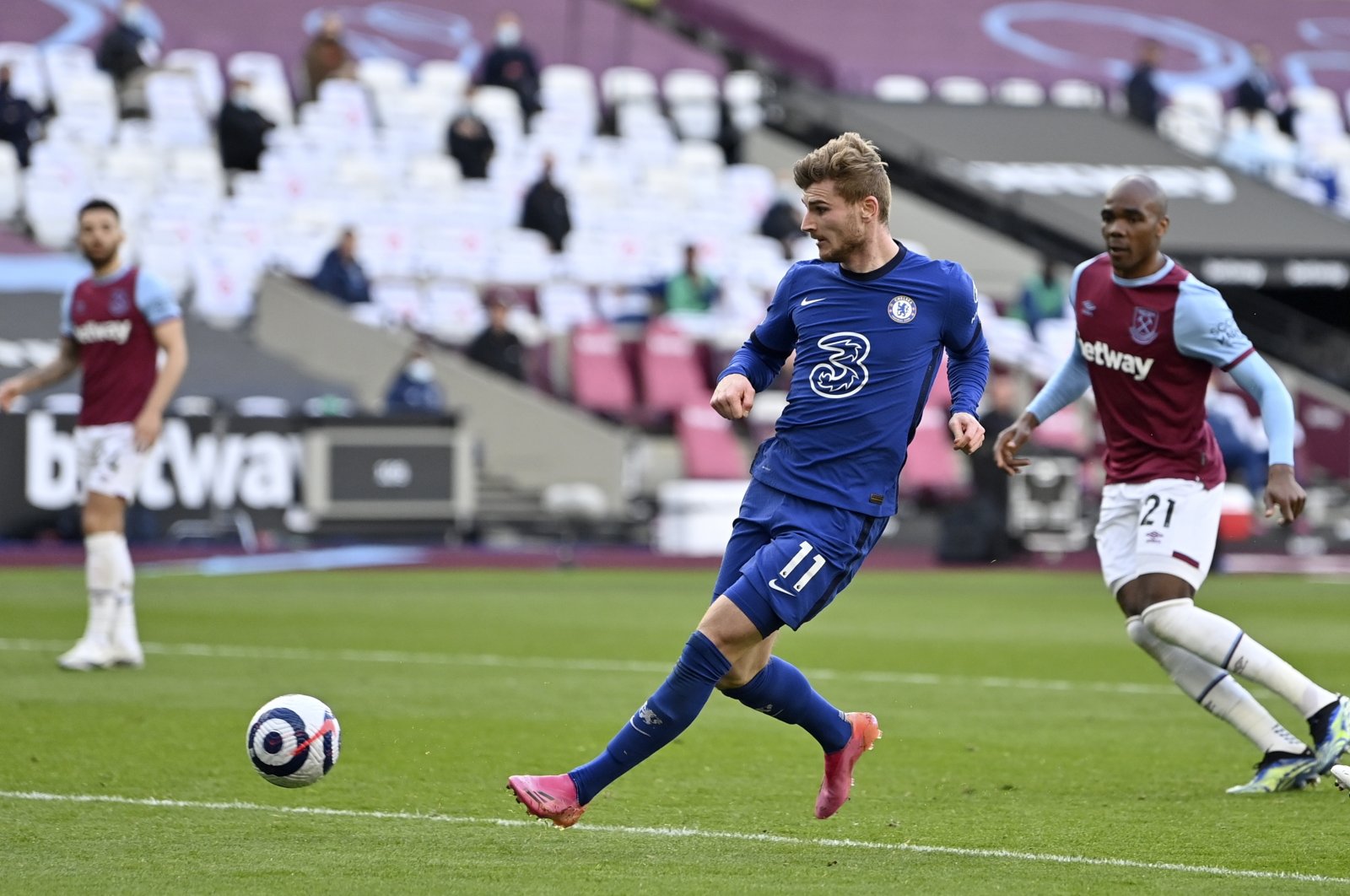 Chelsea striker Timo Werner put the Londoners firmly in control of the race to next season's Champions League after scoring the solitary goal in a 1-0 win against city rival West Ham on Saturday.

Unfortunately for Liverpool, its chances for European qualification were further dented when the holders conceded a stoppage-time equalizer to draw 1-1 with Newcastle.

After a week dominated by England's 'big six' aiming to guarantee top-level European football every season via a breakaway Super League (ESL), Chelsea and Liverpool turned their attentions to trying to earn a top-four Premier League finish on the field.

Manchester City, Manchester United, Arsenal and Tottenham were the other four English clubs involved in proposals for the ESL, which collapsed within 48 hours of its launch after a furious backlash from governments, governing bodies, players and fans.

The Blues are now in pole position as just a second Premier League goal in 22 games for Werner opened up a three-point advantage over the Hammers in fifth.

Thomas Tuchel blamed the distraction of huge protests outside Stamford Bridge on the night the ESL proposals crumbled for a 0-0 draw against Brighton on Tuesday.

Tuchel made six changes with one eye also on the first leg of his side's Champions League semifinal against Real Madrid on Tuesday.

However, Chelsea's superior strength in depth showed against an injury-hit West Ham without Michail Antonio, Declan Rice and Aaron Cresswell.

The result could have been very different had Chelsea defender Cesar Azpilcueta not escaped strong claims for handball inside his own area as he deflected a shot wide midway through the first half.

Werner has failed to live up to his 50-million pound ($69 million) price tag since joining from RB Leipzig last summer.

But the German ended his two-month goal drought with a composed finish from Ben Chilwell's cross two minutes before halftime.

After the break, though, Werner showed the profligacy in front of the goal that has characterized his season as he somehow turned the rebound wide after Lukasz Fabianski parried Mason Mount's long-range effort.

The in-form Jesse Lingard came closest to an equalizer for the hosts as his looping effort drifted just wide.

But the Hammers' hopes were killed off 10 minutes from time when Fabian Balbuena was harshly sent off after a VAR review for his follow-through on Chilwell after clearing the ball.

Current Premier League champions Liverpool is now four points adrift of the top four after throwing away a late lead against Newcastle, leading manager Jurgen Klopp to say they do not deserve a place in the Champions League.

Mohamed Salah had opened the scoring after just three minutes, but Liverpool wasted a host of chances to extend their lead and paid in stoppage time.

The Reds even had a reprieve when Callum Wilson's equalizer was ruled out after a VAR review for handball, but still could not hold on as Joe Willock's deflected strike secured a vital point in the Magpies' bid for top-flight survival.

"I didn't see us today playing like we deserve Champions League next year. We have another five games and we will see. We learn or we don't play Champions League, that's it."

A protest outside Anfield on Saturday was more muted than the ones seen ahead of Chelsea and Arsenal's home matches in recent days, but several flags and banners were attached to the gates around the ground calling out the "greed" of the club's American owners Fenway Sports Group (FSG).

Despite not being in action until Sunday away to Leeds, Manchester United fans gathered outside Old Trafford on Saturday to also take aim at the Glazer family, who own the Red Devils.